For many, Jaws 2, the sequel to one of Hollywood’s most iconic, highest-grossing creature features of all time, is a movie still lurking beneath its predecessor’s shadow.

Released in 1978, Jaws 2, unlike its predecessor, was a full-blown slasher. Director Steven Spielberg was gone, but a few actors from Jaws were back to reprise their roles, including Roy Scheider (police chief), Lorraine Gray (chief’s wife), Murray Hamilton (mayor) and Jeffrey Kramer (deputy).

“Basically, Universal Studios brought over the smallest number of people from Hollywood they could to make this movie, and everyone else was locals they hired out,” Brody Cantrill said of the production of Jaws 2, which was shot in Destin, Navarre Beach, Pensacola and Martha’s Vineyard, Massachusetts.

Cantrill met Navarre native Savana Morie while working at a Panama City Beach television station. When Morie learned that Cantrill’s mother was a Jaws fanatic — she named her son after the protagonist in Jaws — and that he had a penchant for horror films, the two embarked on a Jaws 2 sightseeing tour along the Panhandle.

The trip inspired an idea for a television news story, Cantrill said. The friends posted on the Concerned Citizens of Navarre Facebook page to see if any locals who participated in the filming of Jaws 2 were still around.

“The post kind of blew up,” recalled Morie, who today is a news producer in Knoxville, Tennessee. “All these people wanted to talk to us, and we thought we could really make something of this.”

And they did. Back in the Water is a documentary that explores not only the making of Jaws 2, but its impact on the Emerald Coast’s once idyllic neighborhoods of the late ’70s. 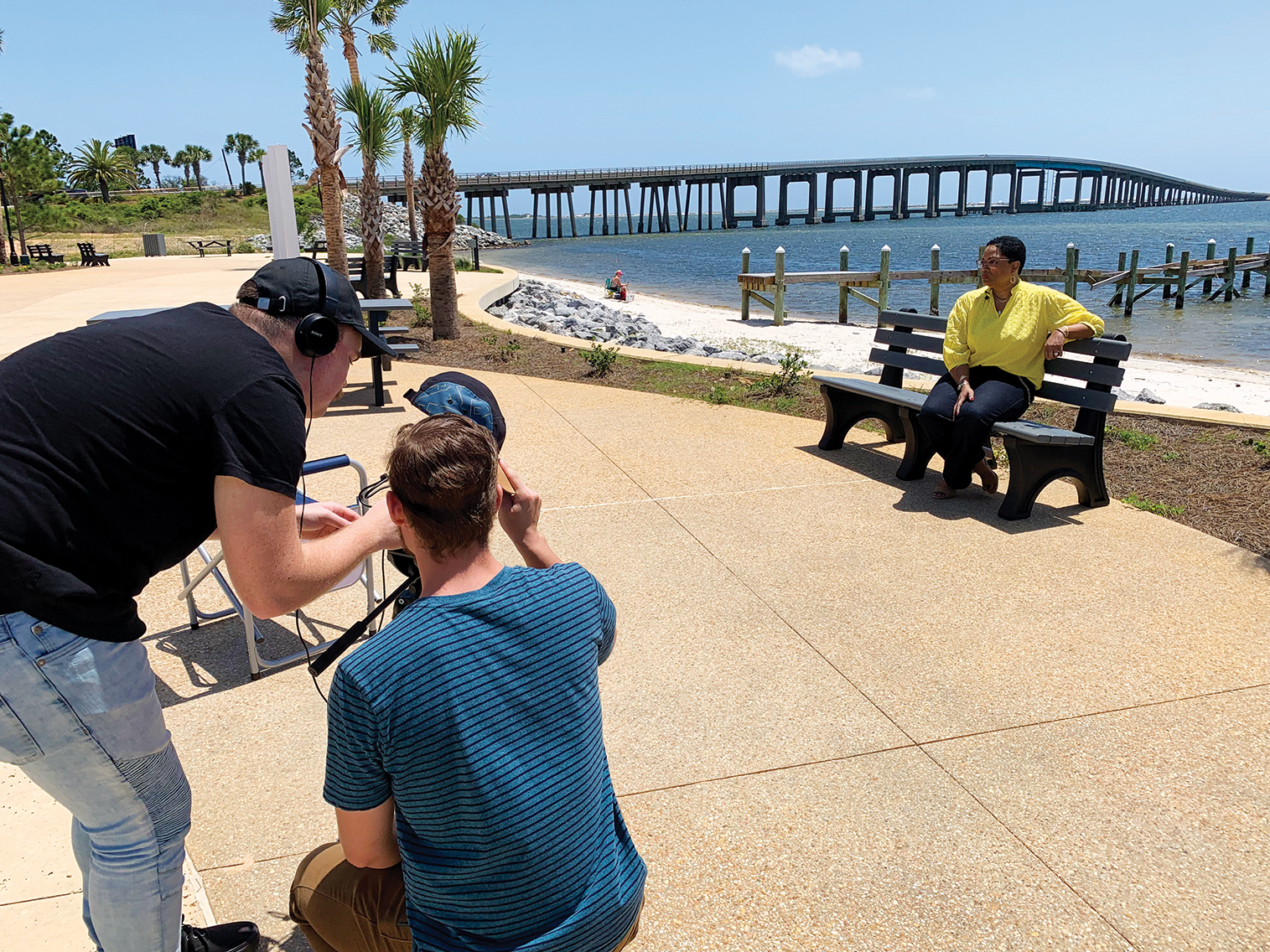 Toni Britton was a Fort Walton Beach High School student when she and members of her family were picked as extras for Jaws 2. Two weeks away from classes made for a nice gig, made even nicer when Britton figured in a close-up shot. The Jaws films stimulated interest in shark fishing along the Emerald Coast. Photo Courtesy of Savana Morie

“The mission of the documentary is to create a sort of historical time capsule because Jaws 2 was filmed 45 years ago at this point,” said Cantrill, the film’s director. “We want to preserve all the memories of locals who were a part of it.”

Morie is Back in the Water’s producer. She and Cantrill teamed up with Tennessee-based cinematographer Nathanael Taufer and digital media producer Carson Brennan. I met with the crew in Navarre Beach last April when they had just begun filming some 20 interviews with former cast members.

“A lot of Jaws 2 was filmed right here,” said Morie, gesturing toward Santa Rosa Sound near Navarre Beach. “Some was shot in Pensacola and in the Destin Harbor. You look in the background of these scenes, see that white sand and know it could only be one place.”

Morie said it took several months to round up interviewees by finding names in articles, poring over books on the film’s production and sorting through over a hundred inquiries received on social media.

“We’ve already spoken with Phil Kingry who, back then, was a tugboat captain who ended up handling all the logistics for Universal and became the film’s marine coordinator,” Cantrill said. “He had 30 members of his crew alone working on boats for this movie.”

Beach scenes are packed with hundreds of locals and their families serving as extras. For a dancing scene, Universal enlisted 10 girls from Gulf Coast High School and told them to pick out 10 guys they liked well enough to have as partners.

“They even made a local woman the head sail director, and she taught all the teenage actors how to sail,” added Morie. “She’s no longer with us, but we spoke with her family, who still has some of these Sunfish sailboats from the movie and gave us a crash course on how to sail.”

Too, the crew conducted an interview with Okaloosa County Tax Collector Ben Anderson, who had a small speaking role in the film and had much to share. Another source, Morie said, was excited to talk about the time she got to skip school for two weeks to “play on the beach.”

Not a bad gig at all.

“You have to wonder how much of this area was built on Universal money,” Morie said. “At the time, there wasn’t much here. But Universal threw money into this place, and we’ve met people like Jim Johnson, a small business owner, who said Universal was his first customer and essentially launched his career.”

“People are telling us it’s the most fun they’ve had in their lives, yet they rarely get to talk about it,” Cantrill said. “Now that they’ve been invited to sit down and talk about nothing but that, it’s like they’re unbelievably happy to have someone listen.”

At our interview, the team shared with me a photo album put together by one of their interviewees. It includes behind-the-scenes shots of Scheider and animatronic sharks. Others have shared rubber shark teeth from the set, newspaper articles and other keepsakes.

The documentary, which is likely to debut at film festivals in early 2023, will also include conversations with a few of Jaws 2’s Hollywood squad but, really, “It’s a film that belongs to this community,” Morie said. “People are proud of this area, and for them, Jaws 2 captured a sentimental time in its history. As someone who grew up here, it means a lot for me to show a huge audience why this place is great.”

“This is for them,” added Cantrill.

That said, if Universal wanted to pick up the documentary and “include it in the bonus features of every Jaws 2 DVD made for the rest of forever,” Cantrill laughed, he wouldn’t complain.

Back in the Water

is planned for official release June 16, 2023, on the 45th anniversary of Jaws 2. For more information, visit backinthewatermovie.com.