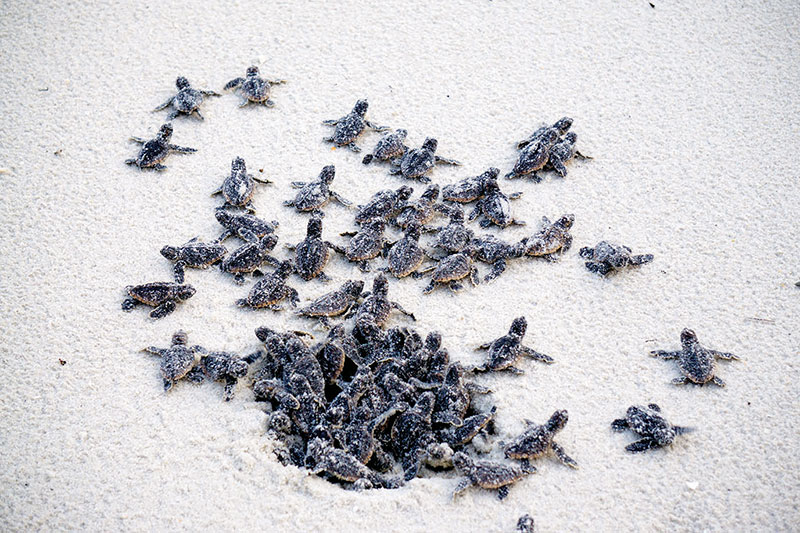 Hatchlings head for the waves at Panama City Beach.

Beginning about May 1 and throughout the summer, they emerge from the Gulf.

The sand will serve the eggs as an incubator for two months or so before hatchlings claw their way to the surface and dash madly for the water. Few will survive a gauntlet of predators and make it to adulthood, but a cadre of turtle lovers works to ensure that they at least have that chance.

In Bay County, the non-profit Panama City Beach Turtle Watch has been protecting sea turtles since 1991.

“Our mission is really focused on identifying nests in Panama City Beach and making sure they’re sheltered until the hatchlings make it safely to the water,” said director Kennard Watson. “We try to work with local residents and tourists to educate them on the need to protect the turtles of our beach.”

During nesting season, Turtle Watch members arrive on the beach at dawn, scouring the sand for any tracks made by sea turtles the previous night. Thanks to the support of the Bay County Tourist Development Council, Turtle Watch hires special surveyors to mark off possible nesting sites. The rest of the work is left to the organization’s volunteers.

“Our volunteers come out to these markers to verify that a turtle has actually nested,” Watson explains. “In some cases, the eggs may need to be moved to a safer location. We’ll only do that if the eggs are vulnerable to being washed away by tides. In that case, the volunteers will move the eggs to a higher location in the same vicinity to prevent flooding. Then, the volunteers will put up wooden stakes, flags and a sign indicating the presence of a sea turtle nest.”

The markers remain in place until eggs hatch.

The loggerhead is the turtle species that most often lays eggs on North Florida beaches. Its relatively outsized head is among its most outstanding features. Loggerheads may reach three feet in length and live to be 50 or older. In rare instances, nests of green sea turtles and even the endangered leatherback sea turtle have been found by Turtle Watch teams.

Upon hatching, baby turtles are attracted to the moon, a natural beacon that guides them to their new, oceanic home. However, along developed beaches, baby turtles may react to light emitting from condos or other beachfront buildings and follow it instead. Watson stressed that artificial lighting is the biggest threat to hatchlings, and emphasized the importance of turtle-friendly lighting on the exteriors of structures.

Nocturnal beachgoers are encouraged to limit the use of flashlights and to avoid flash photography near nests. Another risk to baby turtles are obstacles in the form of debris, litter or other items that may interrupt their progress to the Gulf. It is important, then, to keep beaches clean.

“My favorite thing about sea turtles is just the sense of wonder I feel when I see these hatchlings, so small and vulnerable, enter the ocean,” Watson said. “It’s going to take them three decades to grow up, and then as adults, they’ll be back on this very beach to nest. It never ceases to amaze me that after so long, they’re able to navigate back to their home beach.”

Want to get involved? Visit Turtlewatch.org or the St. Andrew Bay Resource Management Association at sabrma.org.

The Miskito Indians of Central America clung to a belief in powers attributed to a rock that was shaped like a turtle. Jack Rudloe of the Gulf Specimen Marine Lab in Panacea noted the myth in his book, “Search for the Great Turtle Mother.” The rock, indeed referred to by the Miskito as the Turtle Mother, was regarded as an intermediary between humans and animals. When the rock pointed to the west, so went the myth, sea turtles would move to the mainland to feed and to nest. When it faced east, the turtles would disperse to deep waters around cays, well beyond the reach of humans. The Indians, then, could harvest only as many turtles as they needed, because as soon as they exceeded that amount, Turtle Mother would turn to the east and her charges would disappear.