Inherent in people may be impulses toward compassion and charity, impulses that are activated more often than not by experiences and circumstances. On June 2, Lou Gehrig Day, I was moved to make a donation to the ALS Association, a nonprofit dedicated to finding a cure for amyotrophic lateral sclerosis, the progressive neurodegenerative disease that ended the life of baseball’s Iron Horse. While I am a fan of baseball and a student of its history, my contribution was inspired only in part by a connection to the national pastime. It was triggered more so by an experience I had interviewing and writing about a man battling ALS. He told me he had never been a giver before he got to know others with the disease who are less fortunate than he — people without health insurance or nest eggs or supportive family. To those others, he began to give generously, and to me, he provided a powerful example. On the following pages, we profile a cross-section of nonprofits in an effort to inspire giving. The particular organizations described here may conform to your passions, or they may lead you to consider other causes that you would be comfortable supporting. The holidays can be a season of excess in a world full of exigencies. Why not give yourself the gift of the good feeling that comes with helping people you may never know? — Steve Bornhoft 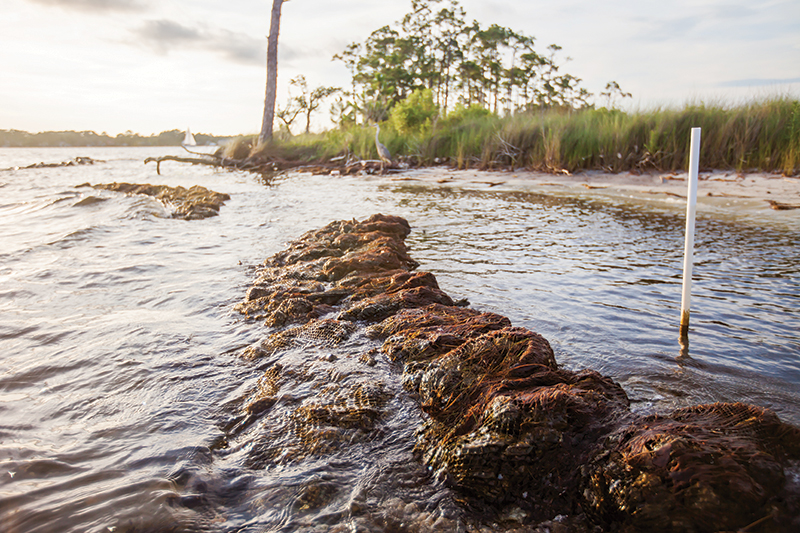 “For the most part, it’s hard for people to imagine that what they have now, they won’t have always,” said Alison McDowell, the executive director of the Choctawhatchee Basin Alliance.

Today, McDowell said, there is fairly good water quality along the Choctawhatchee River and Bay watershed, but the tipping point is always close at hand. Sedimentation and nutrient enrichment caused by erosion and development pose serious threats to marine life in a region that relies heavily on its waterways both economically and environmentally.

One prong of the CBA’s efforts is restoration. The alliance works to remove invasive species that choke out native seagrasses and oyster beds, two of the primary building blocks of the bay’s food web. This year, McDowell said, has been the biggest yet for developing living shorelines, a natural alternative to seawalls or revetments that leverages oyster beds and salt marshes to decrease erosion and improve water quality.

“One adult oyster can filter up to 50 gallons of water per day, so we create habitats for oysters to settle on,” McDowell said. “We are hoping to create water clarity, but the reef itself is a great refuge habitat and feeding habitat for all types of critters, including redfish. The angler community likes that. When they see us out working, they drive by and say, ‘Keep it up!’”

The CBA is also active in the school system at all age levels with educational courses like Grasses for Classes and Dunes in Schools. Through these courses, students learn about the Choctawhatchee Bay estuary and grow seagrasses or sea oats throughout the year. By the end of the school year, the CBA takes the classes out to one of its restoration sites where they take a hands-on role in planting their grasses and restoring the ecosystem. 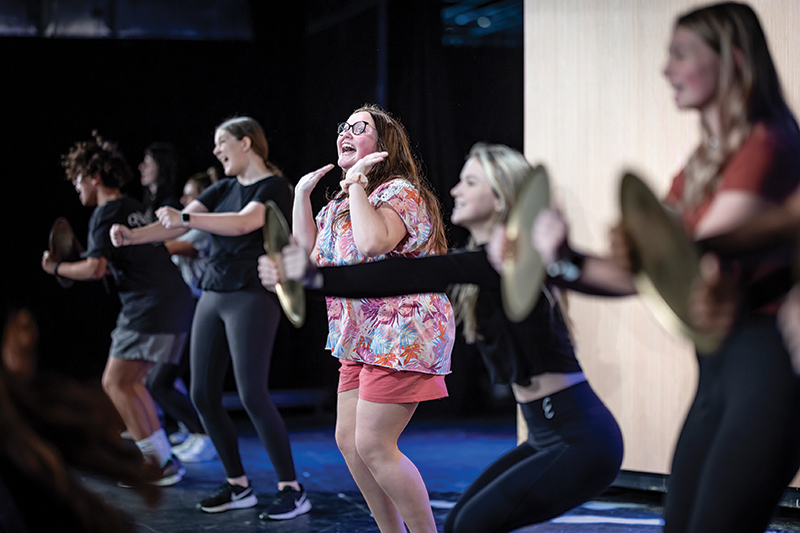 When Nathanael and Anna Fisher finished their graduate studies and moved back to Destin, they weren’t sure what the future would hold, but they knew they wanted to be a part of the arts. During their search for work, the Fishers noted a gap.

In 2012, the Fishers started the Emerald Coast Theatre Company with the aim of bringing professional entertainment and accessible theater education to Okaloosa and Walton counties. In addition to its professional performances, ECTC puts on regular performances for area schools and offers classes on the various aspects of musical theater for children ages 5 through high school on a trimester basis. At the end of each trimester, each age group puts on a performance at the theater.

“Kids blossom in theater,” Nathanael said. “They learn the practice of memorization and cooperation. It’s like a big group project. When you do a play and learn to see the world through a character’s eyes, you also learn to see the world through other people’s eyes. It elicits empathy. There are so many educational and emotional and mental benefits to being involved in theater.”

Several years ago, the ECTC board got together to establish a scholarship fund to ensure that any child with an interest in the theater could get involved regardless of financial circumstances. ECTC gave away more than $16,000 in scholarships in 2022, allowing individual children to take classes and area Title 1 schools to attend shows free of charge. 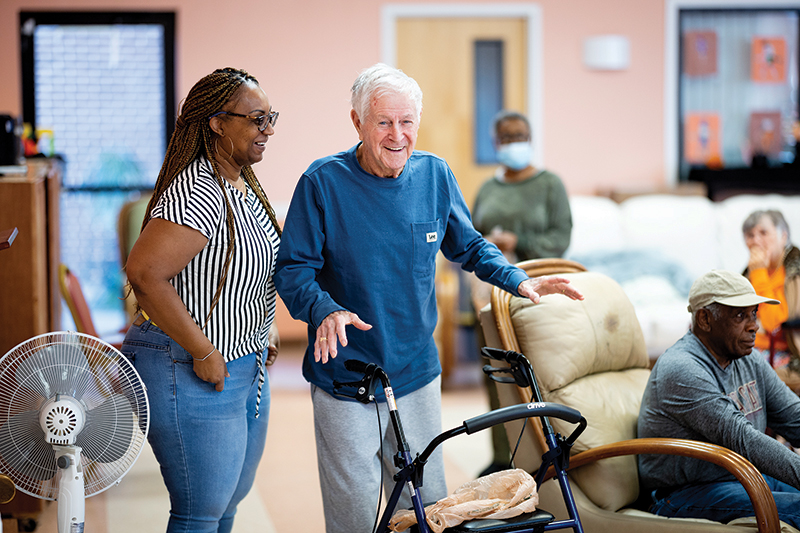 The Bay County Council on Aging works to ensure that older adults never have to go hungry. As the county’s lead agency for senior services for more than 50 years, the BCCA offers in-home assistance, caregiver support, a respite center for adults who need hands-on care and feeding programs, including Meals on Wheels and congregate meal sites.

“Our board of directors has made feeding folks their primary goal, so no one is ever on a waiting list for that,” said BCCA Chief Operating Officer Andrea Marsh.

Qualifying homebound adults over 60 receive nutritional lunches daily through Meals on Wheels, but in recent years, BCCA has begun to deliver evening meals as well. According to Marsh, some who benefit from the program are near nutritional crisis by the time they are referred to BCCA. It was critical that BCCA take its service a step further.

“A lot of times, the volunteer who delivers that meal is the only person they see or talk to that day,” Marsh said. “So although it is a nutrition program, and all the meals are approved by a registered dietician to meet a third of the daily requirements for senior adults, the visit is probably as important as the meal itself.”

BCCA addresses the needs of caregivers as well as older adults. Two support groups, one educational and one communal, allow caregivers to meet twice monthly to discuss challenges and learn about resources and strategies to cope with the stresses of caring for an aging loved one. BCCA’s Respite Center provides meals, programming and non-medical care to adults with memory disorders and other conditions that require round-the-clock care, giving caregivers precious time to themselves during the week. 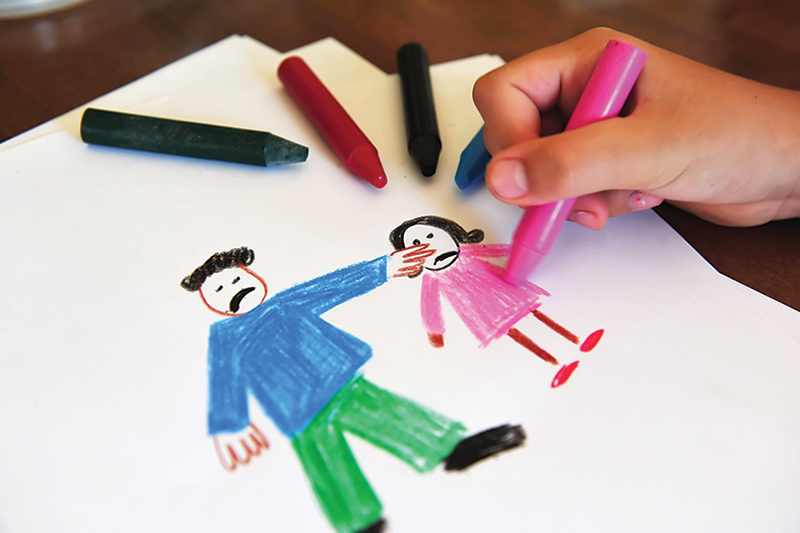 Julie Porterfield had a particularly troubling case in 1988. At that time, Porterfield was a children’s advocate for the State Attorney’s Office working on behalf of victims of abuse and neglect. She and her colleagues from law enforcement and the Department of Children and Families often saw children forced to tell harrowing stories again and again to unfamiliar people in often frightening environments. They determined that there had to be a better way to seek justice for these children.

Via interagency cooperation, the Emerald Coast Children’s Advocacy Center was formed, and Porterfield was named its director in 1999. Based on the national model for children’s advocacy centers, ECCAC provides a safe, central hub meant to minimize the number of times children have to tell their story and offers services to help them heal while seeking justice.

“When a child first comes into the center with their family, they have an advocate from the beginning of that case until the end, whatever that result may be,” Porterfield said. “Instead of having to figure out who to call with what agency, they just call their advocate.”

ECCAC has two locations, one in Niceville and the other in DeFuniak Springs. Each provides trained interviewers, medical exam rooms and free mental health therapy for as long as the child is in need. They also provide holiday parties, clothing closets and other material resources to families.

“Statistically, we know we see about a third of the children who need us, so in 2017, a group of us got together to think about how we could, number one, prevent abuse, but secondly how to identify children who need us but can’t find us,” Porterfield said.

This effort led ECCAC to launch Child Safety Matters, an in-school education program meant to empower children to protect themselves and provide the opportunity to safely disclose abusive situations.

An ‘IDEA’ Whose Time is Now