Summer on the Coast of Maine

When It’s Hot in the South, Consider a Sojurn to a Place Where the Mountains Meet the Sea 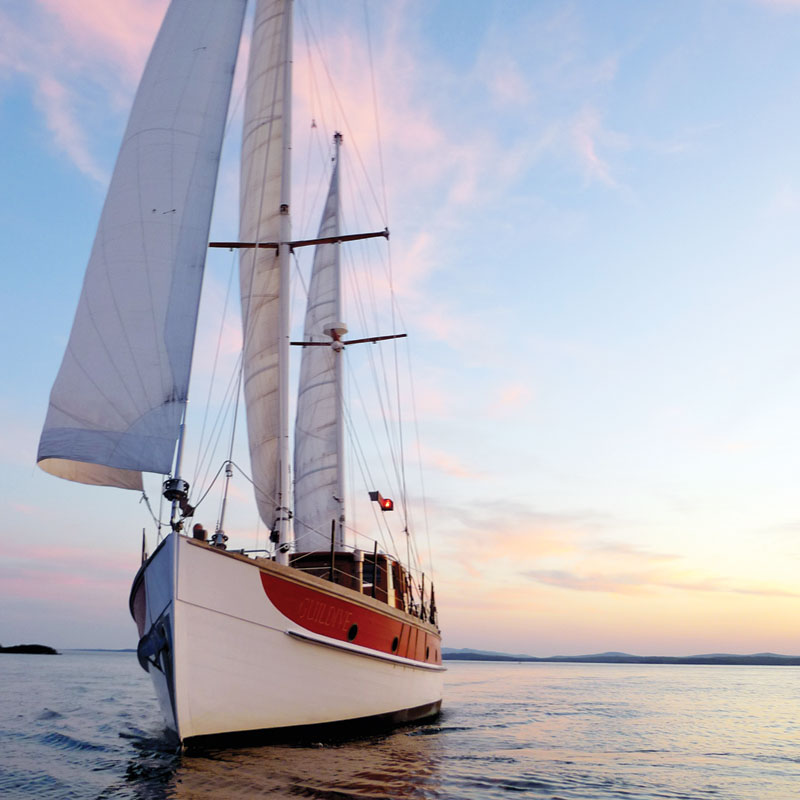 Officially, Maine has nearly 230 miles of coastline. But because of all of its bays, inlets and islands, the tidal coastline measures 3,500 miles

When the weather warms up, the hamlets and villages of coastal Maine come alive, and a summertime visit here should be on everyone’s bucket list. I’ve discovered the perfect home base to enjoy all of the “Mid-coast” pleasures to be found in and around the beautiful Penobscot Bay.

Point Lookout, located in the small town of Northport, started out in the mid-’90s as a mountain top corporate retreat and training facility for the credit card company MBNA. Today, it operates as a resort and conference center, and includes some amenities one might not expect to find — like an eight-lane bowling alley — in a woodland retreat.

Guests are housed in 106 one-, two-, and three-bedroom cabins, spaced around the resort’s 397 acres to afford quiet, privacy and a great opportunity to stretch out on an Adirondack chair and enjoy starry nights unimpeded by light pollution.

While the cabins look rustic, all have modern amenities including kitchen facilities, screened porches, air conditioning and Wi-Fi — for very reasonable rates, starting at $125 per night.

There are six miles of scenic trails available for taking a walk in the woods that so enchanted Henry David Thoreau. You might see some deer or wild turkey, or perhaps you’ll be looking at life-sized and amazingly lifelike bronze sculptures of moose and bear by Forest Hart.

There’s also a sandy beach, a rarity along Maine’s rocky coast. But be forewarned: Even in the warmest months, the Atlantic water here still has temperatures in the 60s. If you can scare up a team, the resort also includes soccer and softball fields.

Some of Point Lookout’s most impressive amenities are its world-class athletic facilities. Within a 36,000-square-foot luxury sports and fitness complex are full-sized basketball, squash, racquetball and tennis courts, a walking track, a virtual golf and Wii room, an aerobic and spinning studio, a stretching room, a comprehensive weight training and cardiovascular conditioning center and more.

A spectacular entertainment and office facility called The Summit is perched atop the mountain with a breathtaking view of the bay and surrounding countryside.

The historic towns of Belfast and Camden are about six miles away in either direction. Both offer a fine selection of diverse restaurants. Of course, fresh lobster is the main staple of most, and having the opportunity to feast on a crustacean that may have been caught the previous day (the fresh lobster does have a distinct texture and flavor) is as special as eating fresh oysters in Apalachicola. Family owned and operated, Anglers Seafood Restaurant in Searsport is where you’ll find locals eating the catch of the day.

There’s an abundance of shopping, including several stores with a particular connection to the region, such as BlueJacket Shipcrafters, also in Searsport, which features more than 100 models of ships as well as model kits, tools and books. You’ll find handcrafted furniture at Windsor Chairmakers, the work of 25 local artisans in one stop at Mainely Pottery and Maine’s version of our New Leaf Market at the Belfast Co-op Store.

Rockland is home to the Maine Lighthouse Museum, showcasing 150 years of history including a close-up look at the huge Fresnel lenses that shine brightly through the night and fog. Maine is home to more than 60 lighthouses which function today much like they did in the past, guiding ships along the 230 miles of Maine’s coastline. One of several in the area, the Rockland Breakwater Lighthouse in Port Clyde is at the end of a nearly mile-long breakwater built in the late 1800s to protect the harbor from Nor’easters. The only way to the lighthouse is to take this hike atop the flat granite block walkway, which is undergoing restoration to return it to its 1950s state when it was manned by the lighthouse keeper. The 100-year-old building is in remarkable condition and is just waiting for some more fresh paint and period furniture to be returned to its heyday condition.

For a more complete history of the seafaring region, visit the Penobscot Marine Museum in Searsport. There are 13 buildings, eight on the National Register of Historic places, including a restored home of a sea captain and the city’s first town hall. You will also see a fleet of antique boats, a library of maritime history, marine art and a trove of souvenirs and household goods brought here from around the globe.

Fort Knox (named after Major General Henry Knox, the same guy as the more famous fort in Kentucky) was built to protect the Penobscot River Valley after British attacks during the American Revolution and War of 1812. Built out of granite mined just a few miles upriver, it never did see combat, but is beautifully preserved. Nearby is the Penobscot Narrows Observatory, where one can take an elevator ride up a 420-foot-tall obelisk and be treated to a 360-degree view of the river, bay and Maine countryside.

In most of the coastal towns, for a modest fee, one can board a three-masted schooner and motor out to Penobscot Bay. Raise the sails and experience this primitive form of transportation in its purest form. Gliding among the many islands with nothing more than the sound of wind and water will surround you with a sense of calmness and tranquility. The ship’s captain and mate provide many historical perspectives of the sailing and the rich history of northern Maine people and folklore.