As my boat, The Bullpen, advanced upon it, the gator, about a six-footer, silently slipped — with reluctance, I will presume — from a sun-drenched spit of sand into Crooked Creek and gradually submerged until finally the knob of its snout disappeared. Across the creek from the gator’s beach is a steep embankment where once a large tree, equipped with a rope swing, stood. Ain’t no tellin’ how many young’uns unseen gators saw when kids dropped from that swing into the creek.

The warm weather of last week roused all manner of cold-blooded critters from their torpor. Frogs joined birds in song. Lizards frequented my porch. On a mid-morning run, I spied a Woolworth’s-sized red-eared slider on a sidewalk and paused to carry it away from the road to a nearby drainage ditch. Time was, such turtles were popular pets. Dime stores sold them along with plastic containers that one filled with water to an inch or so in depth. A ridged ramp led from the bottom of the container to an island topped with a palm tree.

Turtles sales, however, were to go away even before dime stores did.

In 1975, the U.S. Food and Drug Administration prohibited the sale of turtles with a shell less than four inches in length. The move was not made out of concern for cruel confinement, but instead for human health. A large number of human cases of salmonella had been traced to pet sliders.

Returned from my run, I went to tend to some unkempt bushes in a side yard at my house, only to spy two snakes getting it on, a stout female and a much smaller male. 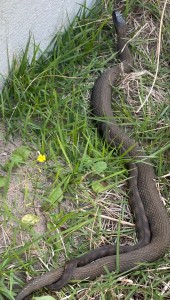 A pair of banded water snakes engage in an act of propogation. Photo by Steve Bornhoft

“Ah, Spring Snakers,” I said to myself.

I took a photo and had my wife post it to our homeowner’s association Facebook page, knowing that our neighborhood’s resident herpetologist would see it there.

The serpents, he posted in turn, were harmless banded water snakes. “Let ’em finish,” he said. “Then, if they bother you, I’ll come and pick ’em up by hand.”

By hand? Well, yes, there is a certain amount of bravado about the snake expert.

All of this activity — the turtle, the gator and the entwined, legless lovers — brought to my mind the book I have read more times than any other, Wild Season by Allan W. Eckert, who wrote about nature waking up in the spring and, in particular, a pair of bull snakes …

Their vents met and copulation commenced. Although she squirmed and twisted a little, it was the male who was mostly active now, looping and unlooping around her, pressing tightly against her or pulling apart. For more than half an hour, this mating act persisted, and only gradually the tempo slowed. At last, they lay still, their vents still joined, and for another quarter hour more, they seemed almost asleep except for the desultory flicking of their tongues. When they disconnected, the male resumed his intertwining around her neck, but this time she paid no attention to him.

It is warming for me to see the natural world keep to the rhythms it has always observed, even and especially as humans, with their action and inaction, disrupt them, perhaps irretrievably.