With good food, wine, and incredible music, there was nothing to wine about

Thousands gathered at Grand Boulevard in Sandestin to sip, savor and celebrate the best in fine wine and spirits at the 14th annual South Walton Beaches Wine & Food Festival.

The April 25 festivities launched with an exclusive VIP Wine Tasting, in which celebrity vintners and local chefs poured patrons elite, prized wines and served them a sampling of South Walton cuisine. Afterward, VIPs were free to join the masses on the “EAT streets” of the Craft Beer and Spirits Jam, a tasty touring of distilleries, craft brews and more chow.

It was a delectable prelude to Saturday and Sunday’s Grand Tastings, which lasted from 1-4 p.m. each day. Upon arrival, VIPs received a sizeable, Riedel goblet and swag bag, while regular ticket holders were bestowed a signature Stolzle-brand glass to haul to over 100 different wine tents and nosh tents.

The Grand Tasting lived up to its name, wining and dining guests with over 800 award-winning wines, 100 spirits and an eclectic sampling of entrees. 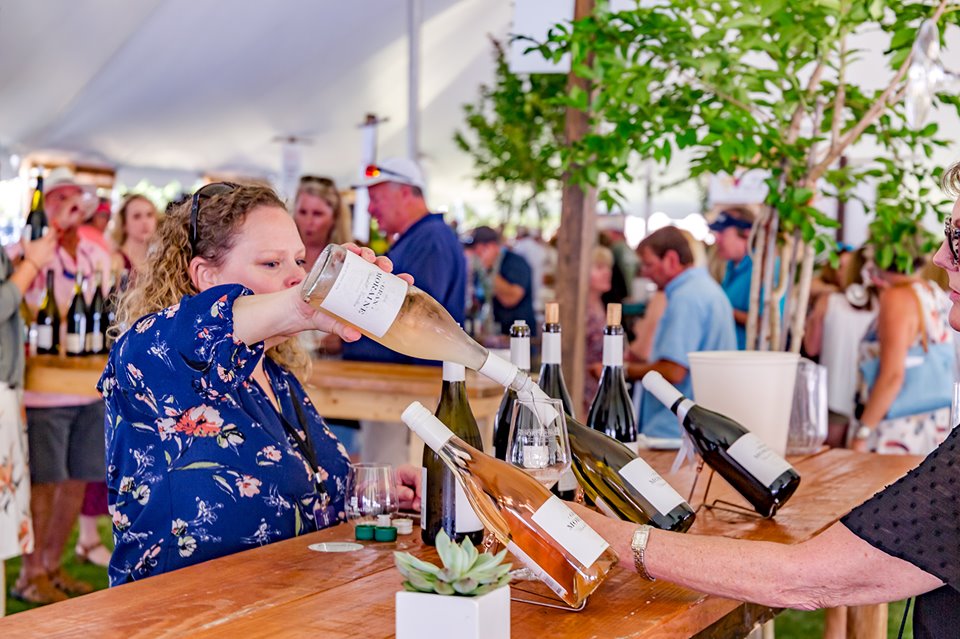 Plumley designed the spread to accompany the Culinary Village’s showcase of Oregon wines, in which Oregonian vintners Eugenia Keegan and Michael Landis of Jackson Family Wines hosted a brief tasting seminar on the origins and burgeoning success of their home state’s vineyards. 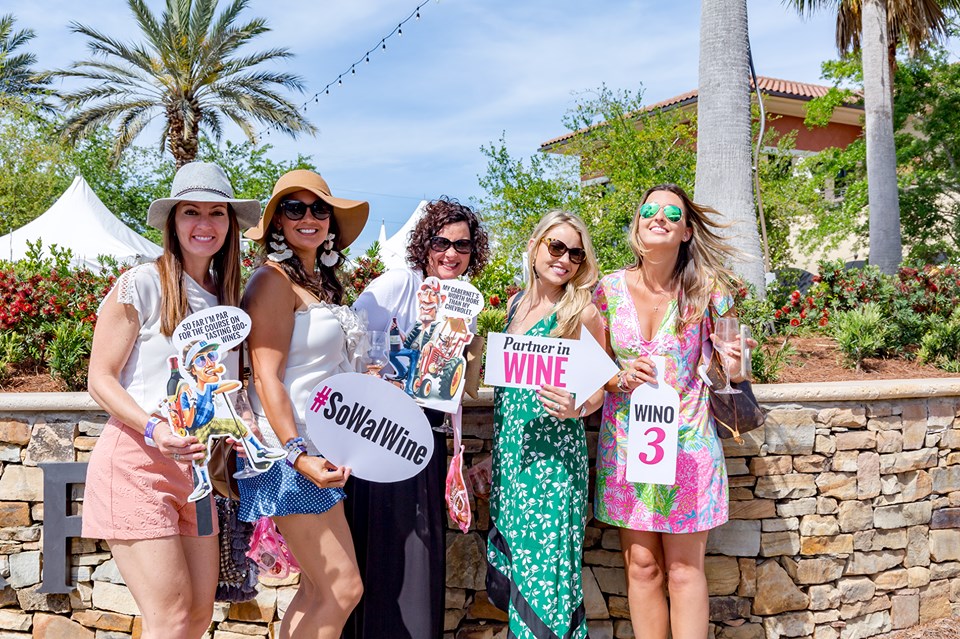 But outside the village amid the labyrinth of libations, attendees feasted on sushi from Harbor Docks Chef Yoshi Eddings and various confections from Publix and Kilwins Chocolate, Fudge & Ice Cream.

Appetites whet and throats dry, guests moseyed to the Rosé All Day Garden, where dapper-dressed gentleman and ladies in sundresses and straw hats nursed glasses of fizzy moscatos, blushing zinfandels and all things pink and bubbly.

With grandiose lounges, floral chandeliers and elegantly staged backdrops, the watering hole proved to be a popular photo-op. But phones also flew up to capture memories with the large, rosé-hued whale mascot of Vineyard Vines, who slowly made his way through the sea of imbibers.

And while it was easy to get lost in the seemingly unending stream of cabernets, malbecs and pinots grigio and noir, the commencement of the annual Destin Charity Wine Auction reminded guests of the true motive behind the merrymaking. 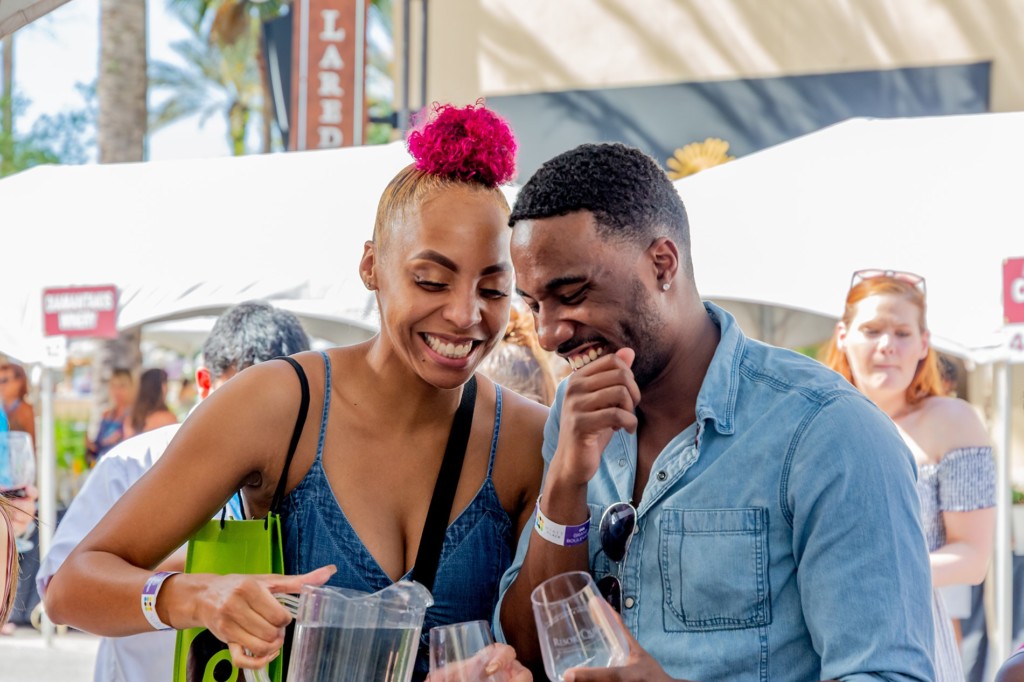 Upon entering the check-in tent, guests mingled at the wine bar over live music and reserve tastings and snapped a memory or two with the Epic Photo Co. photo booth.

At 1 p.m., patrons entered the reserve tasting and silent auction tent, welcomed by the mouth-watering aroma of aged wine and fine fare from Caliza, the Henderson, Fish Out of Water (FOOW), Slick Lips Seafood & Oyster House and others. 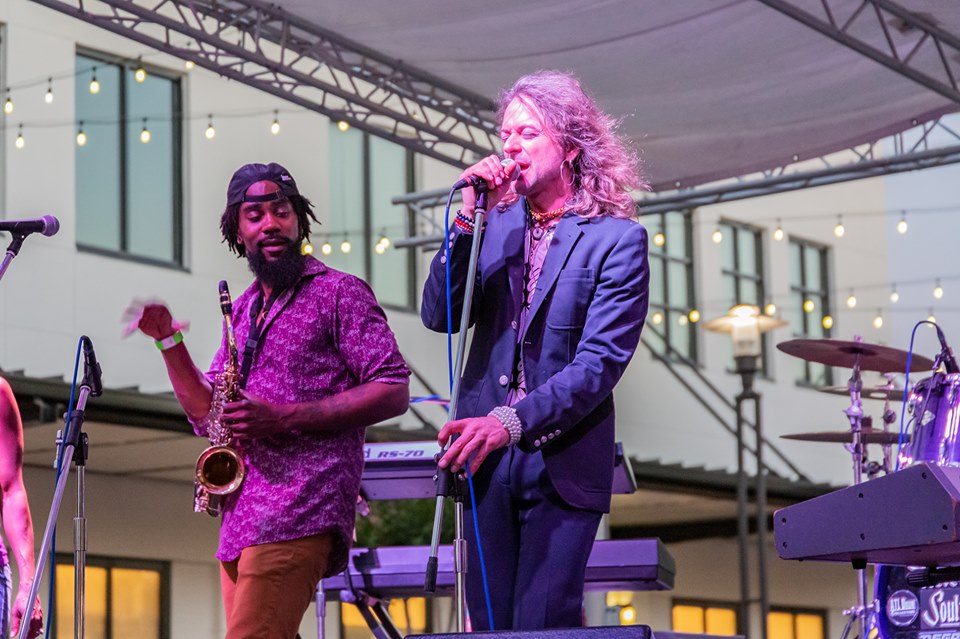 Upon entering the live auction tent, guests were greeted with upbeat tunes and the Destin Charity Wine Auction team flashing light-up props and blasting bubble machines. Each table was furnished by charcuterie boards, thank-you notes from the benefitting children and, of course, more vino.

The live auction was a booming success, selling anything from gargantuan Magnum Force wine bottles to destination vacations to Sicily, the Caribbean, Prague and Costa Rica.

The DCWAF is pleased to announce that this year’s auction was the most successful yet, raising a whopping $3.6 million.