New and Age-Old Ways to Enjoy Your Favorite Brandy

Brandy is an after-hours favorite 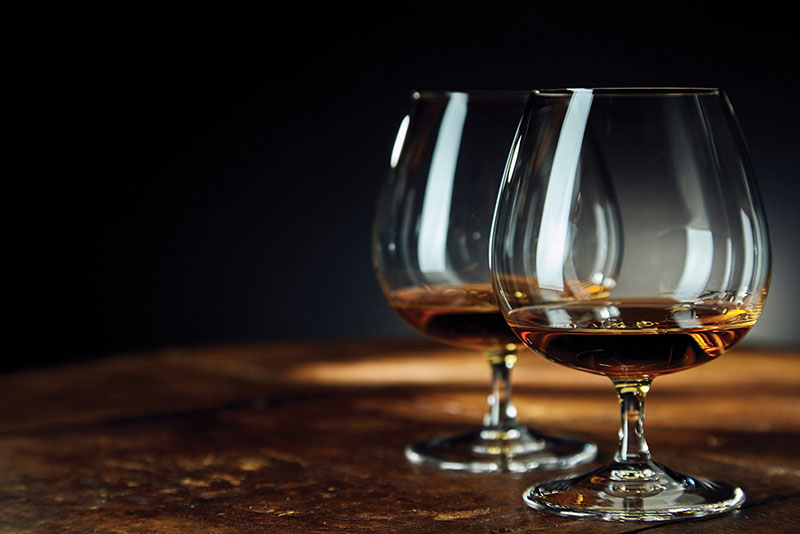 Aromatic. Timeless. Classy. Brandy has been with us for centuries, and, in more modern times, has been enjoyed as a civilized, around-the-fireplace, after-dinner relaxation libation.

Brandy is made by distilling wine … and in the process, the alcohol content gets bumped up to between 35 and 60 percent. Its potency increases to 70-proof and beyond, which means that it’s not a “partying drink,” like beer. Brandy is strong stuff, and it’s not intended for rapid, college-game-day consumption. Brandy is meant to be taken slow and easy and is an elegant way to wind down an evening. It can be enjoyed either by itself or as a mixed cocktail. Sometimes it’s used as flavoring in certain recipes, and back in the day, it was also used medicinally to treat a variety of common illnesses. In fact, research has shown that brandy (like wine) contains beneficial antioxidants.

There is a wide variety of brandies out there, so if one flavor doesn’t work for you, keep looking until you find the right one to suit your palate. The most famous examples of brandy are Cognac and Armagnac, which take their names from the regions of France where they’re produced. The drink is commonly served without ice in a tulip glass or in a snifter: a bowl-shaped glass that features a relatively narrow top, which traps the aroma.

Tom & Jerry
This classic winter brandy beverage dates back to the 19th century and might seem a little complicated, but it’s worth it. It’s a social cocktail, meant to be shared in a gathering of friends. This particular recipe is from Foodandwine.com/recipes/tom-jerry.

Making the cocktail:
Pour the Tom & Jerry batter into a large, heatproof measuring cup. Gently blend in the Cognac and rum, and then gently stir in the hot milk. Pour the drink into four small, warmed mugs or heatproof glasses. Garnish with nutmeg.