With a new total of 19 exhibits, it's time to take a dive

Normally, when someone says they are “underwater,” it isn’t a good thing.

In 2017 when Blue Mountain Beach artist Allison Wickey approached South Walton Artificial Reef Alliance (SWARA) and Cultural Arts Alliance (CAA) about the idea of submerging sculptures along the beaches of South Walton, she was quite possibly holding her breath.

This 46-year-old scuba-diving artist, who was named South Walton Artist of the Year (2011), really didn’t think her notion of curating a collection of sculptures on the floor of the Gulf would happen.

But thanks to a grant from the National Endowment for the Arts — a first for CAA — and support from the Alys Foundation, Visit South Walton, Visit Florida, and the State of Florida Division of Cultural Affairs — the Underwater Museum of Art (UMA) came to life.

“UMA is a great example of the community working creatively together with a common purpose for the right reasons — this project is driven by our mutual love of the Gulf and its creatures,” says Allison Wickey.

It is fitting that Wickey, most known for her 13-step, glazed Venetian plaster coastal paintings, was selected to be in the first wave of seven juried UMA artists to create a sculpture.

Her piece, entitled “Anamorphous Octopus” is a melding of 16 8-foot by 8-foot metal bars. It took four months to create and was “deployed” along with six others in June 2018.

Wickey describes it as an “optical illusion” inspired by her favorite cephalopod, which she says is “super resourceful, multi-tasking” — much like the artist and mother of two who created it. 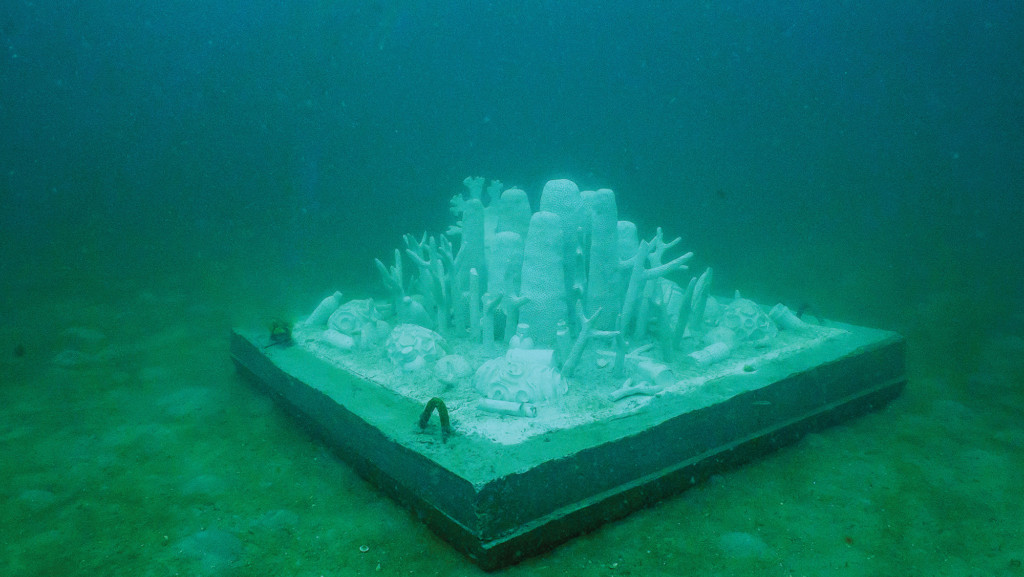 “To Replenish With Water,” by Brazilian artist and marine researcher Beatriz Chachamovits, depicts a cluster of different species of Florida’s corals and sponges. Bleached and infused with forms of plastic waste, the sculpture’s original white form will eventually disappear and be covered by new and healthy corals. Reversing the fate of this bleached piece to, in time, a ravishing coral colony is a powerful message in the battle against climate change.
Photo courtesy of Spring Run Media

Almost one year to the day that the first round of seven sculptures found their home .7 miles off the coast of Grayton Beach submerged 60 feet below the emerald Gulf waters, a second wave of 12 new pieces were baptized, beautifully bloating the total UMA collection to 19.

Boston-based artist Gianna Stewart created “Depth of Decision,” which was deployed in the second round.

The 3,500-pound concrete sculpture is a grouping of four different doorways.

“The inspiration came from the site — this vast, expansive underwater area,” Stewart explains during the UMA launch party at Grand Boulevard that kicked off South Walton Art Week in May.

“I loved the idea of putting some architecture down there that was sort of useless, but also an interesting play on that. Life is a series of doors, and each door presents a decision … perhaps a passageway to the future or to the past.” 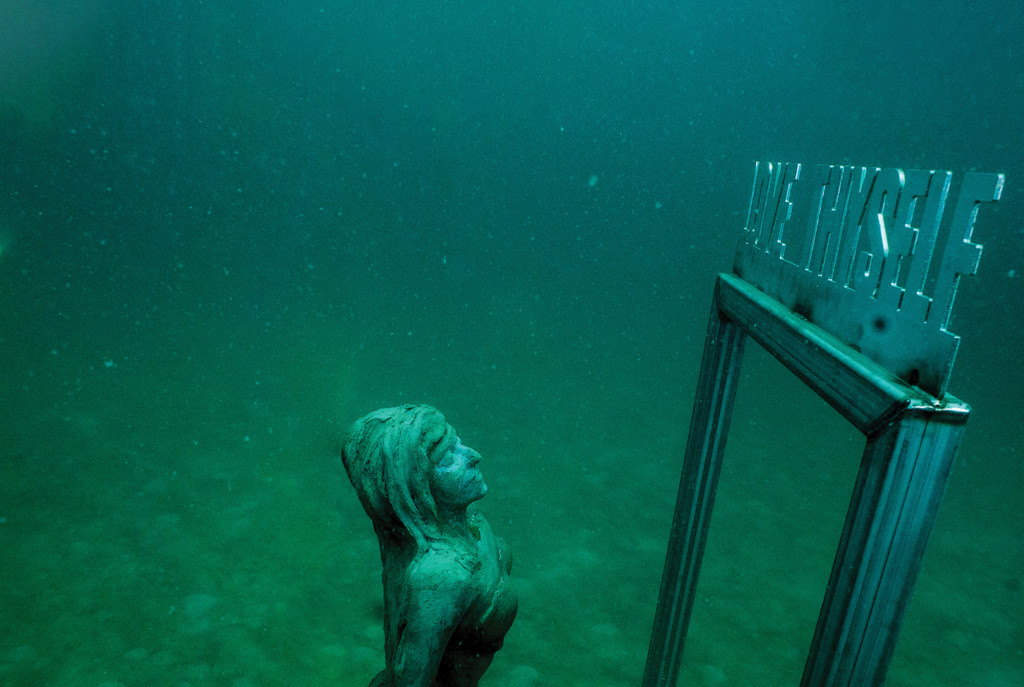 “Love Thyself” is a collaborative project led by artist/designer Maxine Orange. Her team included concept designer Maurice Hunter, body casting with fellow artist Velia Lala, Kyler Fitch from Emerald Coast Mobile Welding, and Eric Shackelford with Destin Metal Shop.The sculpture is of a woman appearing to stand in appreciation of her reflection to visually represent an image of connecting with the power, love, creativity and beauty within one’s self. Photo courtesy of Spring Run Media

Touted as the first permanent underwater sculpture garden in the nation, this creative collaboration that spans about one acre, hit the world with a splash, and soon international media such as Time magazine, National Geographic and USA Today were lauding it a “must-see” attraction and ranking it among the World’s Top 100 Greatest Places.

“There’s nothing around like it,” Wickey explains. “It’s something interesting to see. When you are in a museum, it’s loud and you’re often looking at a one-dimensional painting, but when you’re underwater you see things from a different perspective in that silence of diving. You are able to move around it and see not only a sculpture of art, but how the animals are using the space, and see the growth each year — it’s really cool.”

The exhibit is a dive site. Because the depth is below 40 feet, it requires divers be certified. Emerald Coast Scuba in Destin, owned and operated by siblings Anna and Tom Schmitz, is currently the only outfit providing group dive tours.

The cost is $165 per person for a six to eight-hour dive day with two dives.

“The best part is it’s unique,” Anna Schmitz says. “It’s the only one of its kind in the world, and it’s pretty neat to be able to experience something only a few people on the planet have seen.”

You can fill up your “life experience cup” and sign up for a four-day scuba certification course ($550 per person) offered by Emerald Coast Scuba that includes an online course, two days of training in a pool and two days of diving in the Gulf along with UMA artists serving as special guest speakers on the project. The class culminates with diving down to UMA on the final day.

Artists interested in submitting artwork for consideration to the 2020 UMA installation can visit UMAFL.org for more information.