Me an’ Dad on the Rocks 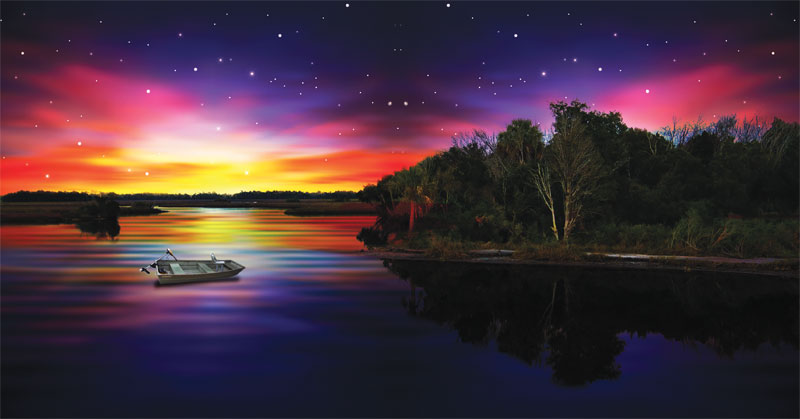 Dad stands like a lighthouse on a wooden platform in the bow of our aluminum jon boat, and he’s not happy. I’ve accidentally put us up on an oyster bar in some remote cove in Ozello, in the wilds of coastal Citrus County.

As with most of these trips, Dad is in the bow with the bow, and I’m in the stern handling the tiller of our trolling motor.

I’m bundled up in a corduroy parka and my 9-year-old ears are covered up by an aqua and orange Miami Dolphins knit cap with a pompom on the top. (It came straight out of the 1977 Sears Christmas catalog). Dad is slightly less constrained. He’s wearing a heavy cotton olive-drab Army shirt, a windbreaker and a black knit cap. We do have something in common: Our shoes are muddy and flecked with tiny pieces of shell, and we both smell like saltwater and fish blood.

Dad wears a headlamp powered by a lantern battery slung around his waist. I have no headlamp and rely on his voice to guide me. It’s pretty challenging to navigate like this at night. The only other directional aids I have in this cold vacuum of space are the twinkling lights of the Crystal River power plant to the north and west. There are some scattered shore lights, but they tell me nothing. More useful is the loud jukebox (or band) at the Pirate’s Cove bar next to the boat ramp. If we stay within earshot, we’re good.

Ordinarily, this “system” works rather well. But at this moment we’ve done a lot of twisting and turning trying to follow something, and I’ve managed to lose what little bearings I had. And, not unexpectedly, I put us up on a bar.

I can’t blame my confusion on a faulty GPS, nor can I say I was distracted by a Nook, iPad or by posting duck faces on Facebook. Those things are decades in the future. No, we’re stuck on the rocks because I’m 9 years old, it’s dark, I’m cold, I can’t see where I’m going and I can’t move fast enough. And, I’m probably just a little flustered.

The tiller jumps out of my hands as the caged motor fairing bounces noisily against the jagged rock and shell. I get spattered good with cold, muddy water, slimy weeds and shell fragments.

“What Daddy? I can’t hear you — we’re on the rocks!” I meekly yell back, as I try to regain control.

The beam of light darts angrily to and fro until it turns and fixes on me. I would compare it to the Eye of Sauron searching for the One Ring.

Sheepishly, I slide the drive shaft out of the water and lay the tiller down. Dad takes a wooden pole and I take an oar and we rock the boat until we’re off the bar and back in deeper water.

Soon, we’re back to searching the cove for our quarry. Dad’s anger is only momentary as we get back to business and his light again searches and darts across the water. The beam comes amidships, and I see swirling brown sea grass, rocks, sand and the occasional blue crab dancing sideways under the rippling waves. We pass slowly by an island with tall cedar trees, and I can hear the cold night wind rustle their boughs. In the starlight I see the vague outlines of an abandoned fishing shack being taken over by cedars, and wispy curtains dance ghostlike in empty window frames. I’m struck by the dilapidated old shack and wonder who built it.

Crossing open water between islands, I find myself being lulled to sleep by the gentle sound of the waves popping against the hull, the gentle rocking motion as Dad adjusts himself in his aluminum chair and the faint twinkling of stars overhead. A star arches into a shimmering curve and is gone, followed by a companion a moment later. Dad pans his light down alongside the boat and does a double take. He’s seen something interesting in the sea grass below us and says, “Take a look.” I lean over the edge a little and see dozens of tiny red eyes. It’s a colony of shrimp, and they look like a string of Christmas tree lights. Too bad we don’t have a dip net or we’d be adding shrimp to tomorrow’s meal of mullet and flounder.

Our time on the water draws to a close, and Dad points me in the direction that will take us back to the boat ramp. His lamp battery is running low, as is the car battery powering the trolling motor. In a little while the bow is scraping against the concrete ramp, bringing us to a stop. Dad hops out and pulls the boat up the ramp. I get out and help him load the boat into the truck, and an hour or so later we’re home safe again.

Years later we mingled some of dad’s ashes in those waters. I still can’t believe the old man’s gone. Now I’m the grownup and some days are tough, but it’s OK. I know now that he’s still standing in the bow, guiding me along and showing me the way home.