Love to Soak In a Tub, or Is a Shower More Your Speed? Either Way, Design Options Abound

Tubs, you might say, are taking a bath these days, while showers are getting ever more attention.

“It’s a bit of a tug of war,” says Kim Fouquet of Fouquet Architecture and Interior Design in Santa Rosa Beach. “When people look to buy or build a house, they absolutely want a tub but not necessarily in the master suite. There’s a distinct feeling that you need a tub in the house for resale value and, of course, it’s a must for families with small children. In the end, the tub often winds up in the guest bath.

“At the same time, people want large, luxurious showers in master baths. They may include a tub there, too, but it’s rarely used. We’re an exception at our house. We have both a large shower and a freestanding tub. That’s because my husband prefers showers, while I love sinking into a tub at the end of a busy day.” 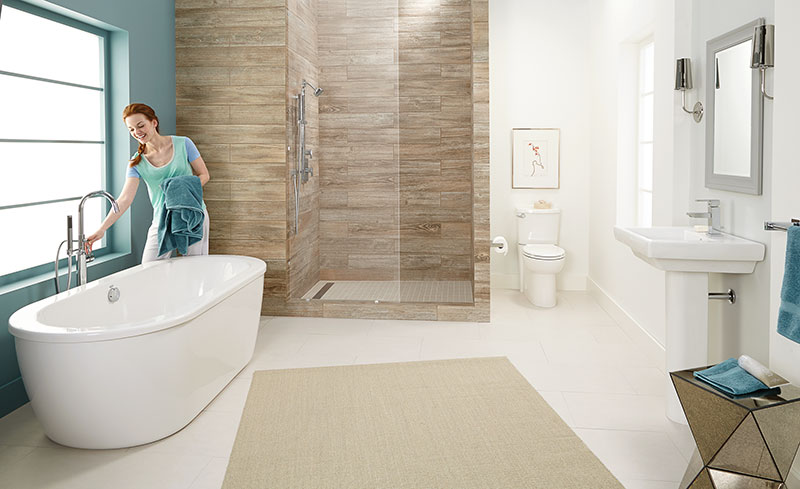 This stand-alone tub by American Standard evolved from the claw-foot tub which reached the apex of its popularity in the late 19th century. Though converting bathtubs to showers is a current trend, many homeowners who have the space and budget, are opting for spa-like bathrooms that feature both.
Courtesy American Standard

“People don’t have time for baths,” he says, “so we’re converting a lot of tubs into showers. This is an especially great option for seniors. We cut an opening in the apron of the tub and install a low berm instead. It’s a sensible alternative to those walk-in tubs, which use a lot of water and also take a long time to drain, so you sit there and chill before you can get out of there.”

Saving water is another reason for showers’ rising popularity. They use one-third less water than tubs, but the industry is trying hard to save even more. American Standard, for example, has developed water-conserving showerheads that use 40 percent less water. This is done with a turbine that pressurizes and spins the water into a vigorous spray.

Bath remodeling, up 17 percent in the last two years, now surpasses kitchen makeovers, according to the National Association of Home Builders. But the projects are more centered on functionality than McMansion grandeur.

“People are more interested in intimate spaces,” says Jessica Faircloth of Lemongrass Interiors in Destin. “Rain heads and body massages, doorless showers and skylights mean more to them than a gigantic bathroom. Bigger tiles with textured looks are used even in small baths, but except for white, subway-like tile, glazed versions aren’t seen a lot anymore.”

For smaller bathrooms she recommends creating a larger, spa-like shower by getting rid of the shower/tub combo.

Pre-fab shower surrounds are available in many configurations, with extras such as seats and safety bars, but Kohler has upped the ante with the Bellwether, a one-piece, cast-iron shower base.

“It’s solid and clean-lined,” says Jennifer Rindt, Kohler’s showering product manager. “And since it’s one piece, it’s easier to maintain than a tiled base, and it won’t crack or leak.”

In luxury homes, shower surrounds tend to be open to the rest of the bath or feature half-walls. Glass enclosures are offered in straight or curved versions, frameless and with extra panels.

Since showering is mainly about the water, it matters how it’s targeted.

“The options today are so varied that it pays to really explore the possibilities,” Rindt notes. “Once you’ve done that, you can combine components in a number of ways to accommodate every family member.”

First off, there are multi-function showerheads that deliver a variety of spray options and a range of intensities, from pulsing blasts to gentle mists. Then there are body sprays offering a variety of experiences. Some types blend into the walls discreetly, while others are adjustable for a range of intensities. Many sprays are targeted to provide relief for sports injuries, arthritis or just everyday aches and pains.

Rainhead showers mimic the drenching of a summer rain and have become enormously popular. Hand showers that combine the functionality of a shower with the ability to direct the water right where you need it are also popular.

Finally, there are musical and chroma-therapeutic technologies to brighten the shower ritual. Kohler’s Moxie, for example, is a showerhead with a built-in wireless speaker system, and the company’s Water Tile Ambient Rain shower panel features integrated chromatherapy that bathes you in mood-enhancing colored light sequences.

No matter what the experts say, there are still tub lovers galore and plenty to love. As Jean-Jacques L’Henaff, vice president of design for American Standard, says: “It is about that wonderful soaking experience, a place where you can escape within your home, to de-stress and relax after a long day.”

He calls freestanding designs the most important trend in tubs.

“They look wonderful and are available in all sorts of materials,” he says, “from acrylic to cast iron and all the way to exotic stone. Plus, they are sold at various price points, making them affordable for the average homeowner as well as the high-end luxury customer.”

“The tub has come a long way,” she says. “From being hidden behind a curtain, it has become a sculptural focal point, especially in the master suite. Top-of-the-line luxury tubs can be found in many stunning materials, including copper, stainless steel, poured concrete, marble and travertine. They are expensive, but they sure make a statement.”

Tubs at all price points are durable, notes Jessica Faircloth of Lemongrass Interiors, but consider their weight. Putting an especially heavy cast-iron or stone tub into a second-story bath could be a problem.

“And watch the size and shape,” she says. “Lie down in it right there in the showroom and see if it feels comfortable. Some tubs are shaped like recliners, some have lumbar rests.”

Most bath designers say that whirlpools are no longer popular, so manufacturers are going for gentle bubbles instead of powerful jets. Soaking tubs, including the 19th-century classic clawfoot, are also taking the place of whirlpools, and some manufacturers marry both trends. MT 1, for example, offers heated backrests and recirculating systems that maintain bath water at 102 degrees. Kohler’s “sok” tub is 66 inches by 34.5 inches to cover the bather from shoulders to toes and provides tiny, effervescent bubbles from 11 air jets. It further relaxes with the sound of cascading water dropping off the rim’s horizon into the tub’s recirculating channel.

And, like showers, tubs have gone high-tech. They can vibrate with music from invisible speakers, glow with color, emit glorious aromas and much more.

But Faircloth warns that practical considerations are in order, too, when you’re shopping for a tub. Is your water heater large enough to fill it? If you’re putting in a tub with jets, will you have to install new water lines? Will the tub fit through the door when it’s delivered? Will it need an electrical connection to run a pump, heater or lights?

“Choosing a tub should be fun,” she says. “And it can be if you know your options and the limitations of your house. Happy bathing.”