For Amy Hoyt, There’s No Place Like The Silver Screen

From a small-town market comes a super star

For 25 consecutive years, Amy Hoyt has been delivering the news to viewers of WMBB-TV in Panama City. In the industry she first entered in 1980, such stability is an oddity, but Hoyt never aspired to a job in a major market or with a network.

For Hoyt and her husband Robert — they both graduated in 1977 from Panama City Christian School — Bay County always has been home.

They departed the area for a few years when Robert enlisted in the Army and learned to be a pilot, but when they returned, it was for good.

Even as Amy resisted the temptation to go big, Robert contented himself to fly with a small carrier, Northwest Airlink, when the couple’s two daughters were young.

“We were happy here,” Hoyt said. “And we wanted to be around family.”

She attended then-Gulf Coast Community College, where she studied journalism and wrote for the school newspaper before catching on with the on-campus public radio station, WKGC-FM.

Hoyt’s first TV job was at WMBB rival WJHG, where the iconic Joe Moore hired her as a weekend anchor and weekday reporter and served as her first news director.

With two years under her belt as a record spinner and news director at a commercial station, WPAP, Hoyt applied for a job with another then-popular radio station in Panama City and was told that she didn’t have enough experience.

“I was upset and crying, and my dad told me to go see Joe Moore,” she said. “It was the best advice he ever gave me. Joe was a good man and a great mentor. He gave me my start in television, and I can never forget that.”

Moore died in December 2015 after spending 43 years behind the news desk at WJHG.

These days, Hoyt, 60, is a mentor to reporters — now called “multimedia journalists,” given the advent of social and digital platforms — who are younger than her own children.

“They are from a generation that you worry about sometimes,” Hoyt said.

“In the era of social media, you’re maybe not sure how they are going to perform as journalists, but I have been amazed at their talent and their ethics and morals. We give them challenges, and they meet every one of them. And we give them a lot to do. In a small market, they do it all.” 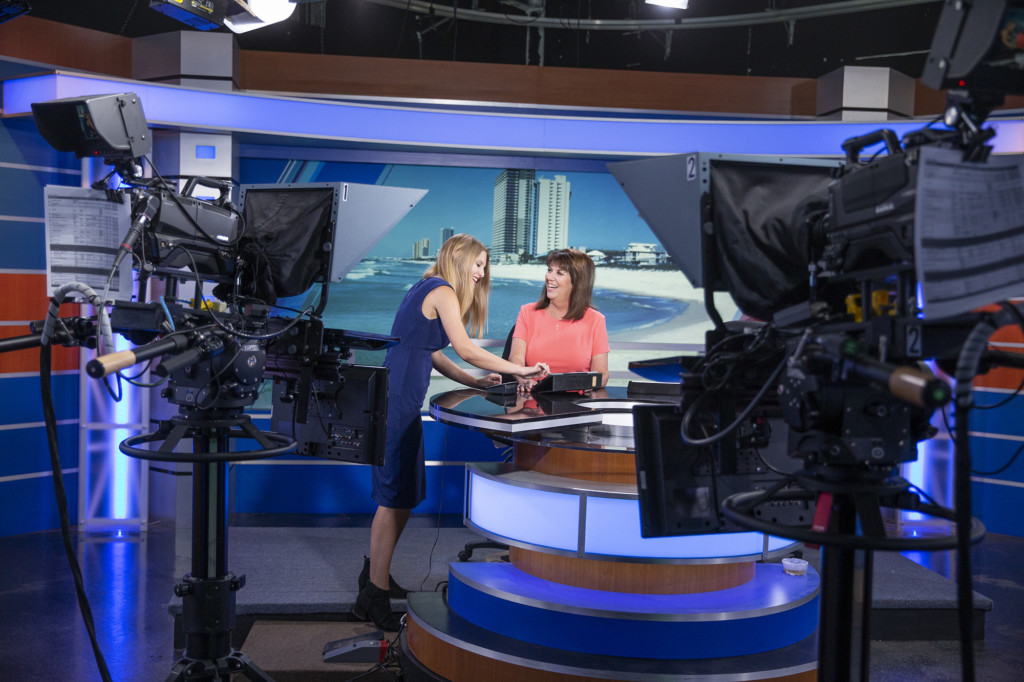 Amy Hoyt, 60, works as one of the news anchors at WMBB News13 in Panama City. Hoyt is pictured with sports director Courtney Mims who joined the team in January, 2019. Mims considers Hoyt a mentor at the station. Photo by Mike Fender

They arrive from throughout the Southeast, she said. One came from Minnesota.

A typical rookie mistake, Hoyt said, is coming back to the studio without all of the information a story may require or without a complete command of the facts.

“So, we may have to get on the phone and call a county commissioner back,” Hoyt said.

“We may need to verify whether a figure from a budget is thousands or millions. It’s not easy to sit through a three-hour commission meeting and then condense it into 90 seconds. As a beginning reporter right out of college, you may find that those meetings deal with subjects that you don’t know much about. You have to learn to do research and be inquisitive.”

And sometimes enterprising. Some news days are slower than others.

“If we have the kind of day that doesn’t result in a lot of breaking news, that gives us the opportunity to air the story about the school groups that we didn’t have time for the day before,” Hoyt said.

“News doesn’t have to be bad to make our broadcasts. I enjoy doing stories on Panhandle residents who do extraordinary things on a daily basis.

“It’s fun to put their stories out. Hometown journalism is different than network news. People ask us to cover things, and we try our best to get it all done. But we have not scrambled to fill a broadcast since October 10.”

On that day, Hurricane Michael delivered the biggest story Hoyt has covered in her career.

Hoyt and fellow members of the WMBB news team covered developments and kept their cool until the storm’s Category 5 winds knocked them off the air. That is, they remained in character as detached news professionals until the station went down and they became part of the shared storm experience.

Hoyt is confident that Panama City and environs will come back over time.

She was heartened by an observation made by a reporter from Texas who had been dispatched by a Nexstar station there to help with storm aftermath coverage at sister station WMBB.

That reporter returned to Panama City six months after the storm and said she was impressed by the progress that had been made.

“When you live here every day, it’s harder to see how far we’ve come,” she said. “We’ll get there.”

Asked about on-air gaffes, Hoyt didn’t immediately come up with one.

Then, a smile overtook her face and she began, “There was the time we were doing a health story on the benefits of exercise. When I got to the word, pedometer, I said peed-o-meet-er. My co-anchor at the time, Chris Cato, leaned into the shot in front of me and said, ‘Amy, it’s pedometer.’ We laughed pretty hard.”

And that is Hoyt — affable, fallible once in a great while, never flamboyant and always, it seems, neutral.

She is a broadcaster who listens well and has a genuine interest in people.