Experiencing The World From a Different Point of View

For What’s Up, Just Look Down

The single-engine Bell-47 helicopter rests on a concrete pad at a private airfield in Baker, Florida, about 10 miles northwest of Crestview. The mid-1940s model features the green paint scheme and white Army lettering used in the “M*A*S*H” television show.

Stepping onto the skid, I climb up and sit down on the red leather bench next to the pilot, Mario Werth. He points to the seat belt. I buckle and tighten it around my waist. I’m inside a bubble. The insect-like appearance of the craft, nicknamed the “bug-eyed helicopter,” fits. A cool January breeze enters from the sides where the doors were removed. I adjust my sunglasses and put on the noise-reduction headsets as the two blades begin to rotate. Sensing I’m getting nervous, Werth, 26, says into the microphone, “This helo is meticulously maintained. If you baby it, it will last.”

My plan had been to get the interview on the ground. However, Werth’s calm demeanor, passion for flying and years of experience left me without concern. He explained that the ship is reliable, built like a tank — built to last.

Werth scrupulously follows a checklist, gently waking up the engines. After five minutes, with a broad smile, he asks, “Ready to go?”

Unlike a commercial airplane takeoff, we rise like a floating balloon. I forget to pray. Climbing at a rate of 900 feet per minute, we’re at 500 feet within 30 seconds, immersed in another reality.

“It’s like sitting on your couch and watching the world go by,” Werth says.

Dirt and asphalt roads outline patchworks of brown and green fields. Metal warehouses look smaller than my thumbnail. In the distance, a faint line touches the deep blue horizon of the Gulf. 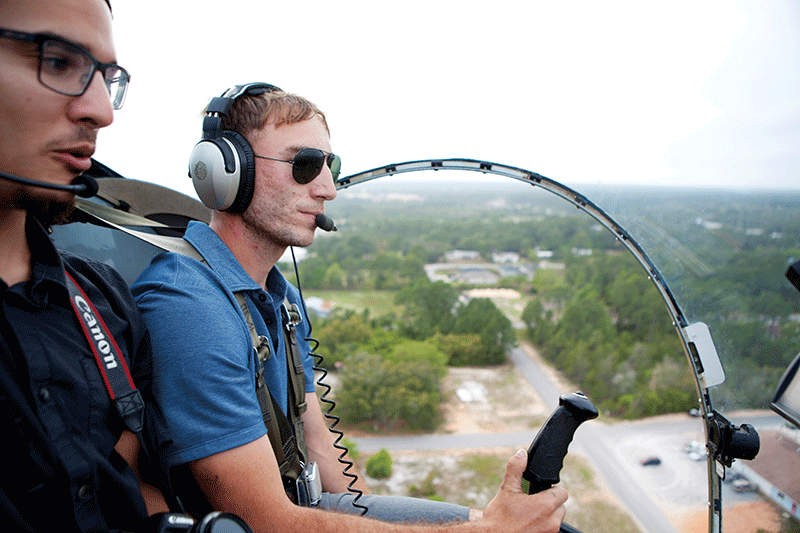 I am offered the stick, or cyclic, that controls our over-the-ground movement. Holding it firmly with my right hand, I move it tenderly. The helo jolts. Werth explains that a quarter-sized circular movement is enough. Nervous that I would make a silver-dollar shape, I relinquish my grip. He turns back to the airport where his wife, Rebecca, 26, and his co-pilot, Michael Brown, 25, await. The trio met in Hillsboro, Oregon, in 2009, the year Werth moved to the United States to go to flight school.

Originally from Baden Baden, Germany, Werth studied in the United Kingdom. He has a bachelor’s degree in chemistry. A summer job with a European helicopter company ended with its bankruptcy.

“They paid me off in flight time. After that, I was hooked,” he says. “It only takes one time. It’s like an addiction.”

After flight school, the Werths worked in South Dakota during the 2012 and 2013 summers and were snowbirds in Crestview. Rebecca Werth helped as ground crew and in administration with Mario Werth, and, later in 2013, Brown joined him flying tourists over sharp buttes and natural grasslands in the Badlands and sites such as Mount Rushmore National Memorial. The Werths moved to Crestview in 2014 and Mario worked for Timberview Helicopters taking sightseers, skydivers and wing-suited jumpers into the sky.

This year, the Werths acquired the Bell helicopter and launched their tour business with partner Navarre Family Water Sports. The only helicopter of its kind on the Emerald Coast, they offer a variety of packages starting at $49.99 per person. The pilot-for-a-day option includes ground instruction and a certificate of flight.

“I love to see the dolphins feeding,” Rebecca Werth says of the unique aerial view offered by the helicopter’s bubble. “It’s fascinating.” She adds that the helicopter does not distract the wildlife.

“You never know what you’re going to see,” Mario Werth says. “Sometimes, if you get lucky, you see a nice shark going by somebody’s leg.”