Detecting my at least unsophisticated interest in birds and birding, Norm Capra volunteered to do me a favor.

We made arrangements for me to visit him at his home in a heavily wooded area overlooking Lake Powell. En route, I would discover that his address on a short stretch of dirt road is enough to defy MapQuest.

Thankfully, when I called Capra to confess that I had become lost, I learned that I was within an eighth of mile of his dwelling, which he has named the Ritz Cracker House. It features Cracker-style architecture with a big porch, but it is no mere cottage, hence the highfalutin name.

Capra is a member of the Bay County Audubon Society and served as the chapter’s president for two years ending in May 2019. In retirement, he is still teaching. He leads a course in “Birding for Beginners” as part of Gulf Coast State College’s “Education Encore” program for seniors.

And, for two hours, I was his student. With a one-on-one tutorial, Capra would introduce me to ebird.org, a website maintained by the Cornell Lab of Ornithology in Ithaca, New York. Birders the world over use the site as an information resource and a tool for identifying birds and inputting sightings to the school’s vast database.

I informed Capra that I had taken the step of establishing an ebird account in anticipation of our session. At that, he seemed pleased. When I told him I had chosen Full Loon as my ebird user name, I caused Capra to pause long enough to smile, a feat not easily achieved.

Steadily and with patience, Capra took me on an ebird tour and showed me how to submit a list and how to explore the site by region and by bird species. The Macauley Library at ebird is home to bird photos and recordings.

The site is like your smartphone. It can do many more things than you are likely ever to use. And, ultimately, navigating the site is a skill best learned by doing. 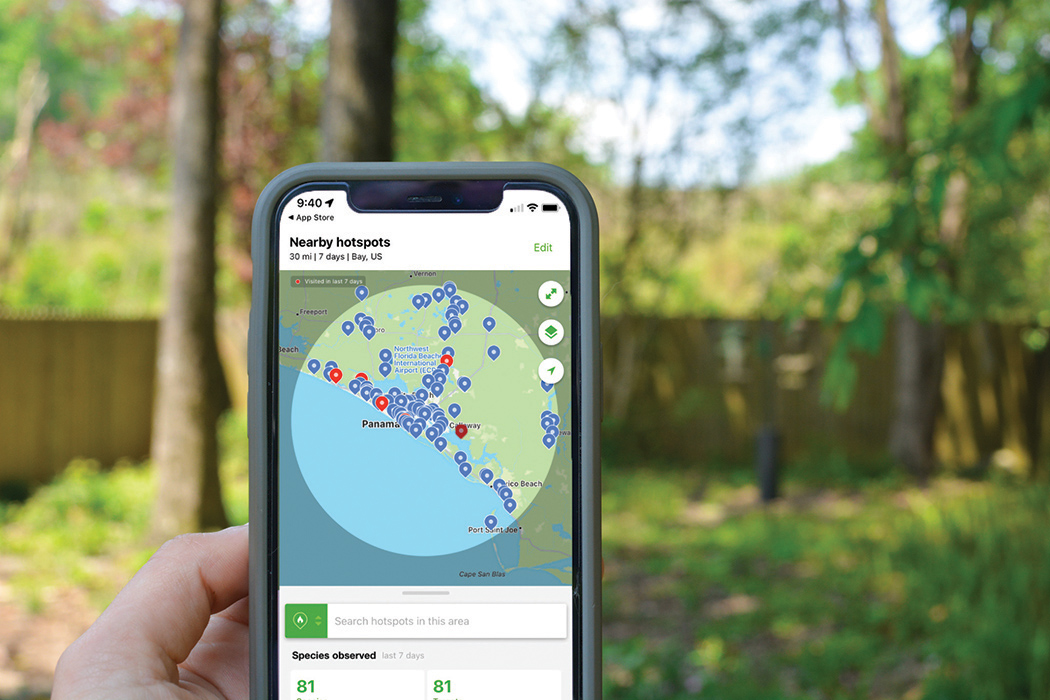 Capra had succeeded in hooking me on ebirding. Earlier today, I drilled down to discover where sightings of black-bellied whistling ducks have been made in Bay County. The locations listed included my Bay County neighborhood, Breakfast Point, where I first spied such a duck on April 30, 2019. The ducks have turned up, too, at the Panama City Beach Conservation Park, Frank Brown Park and Camp Helen State Park.

I happened upon a list of 13 birds sighted at Crooked Creek where I spend some of my pleasurable hours aboard my boat, the Bullpen. The list included many of the birds I have seen there. Ah, but where was the black-crowned night heron, the greater yellowlegs? I am going to have to get involved.

As I write this, the noted birder, author and penguin expert Noah Strycker is in town. On March 29, he submitted to ebird a list of 38 birds he had seen that morning at Gator Lake at St. Andrews State Park. Ebird lists birding hotspots where many species may be seen. Along the Emerald Coast, that park is among the hottest of the hot along with Grayton Beach State Park and Topsail Hill State Park in Walton County and Gulf Islands National Seashore in Escambia County.

Birders had seen a scissor-tailed flycatcher at the park visited by Strycker in days leading up to his arrival in Bay County. But the spectacularly long-tailed species did not appear on the list of 38. No doubt, Strycker was disappointed.

Capra is a conservationist, as you would expect. He winces as he notes the 2019 estimate published in the journal, Science, by researchers who concluded that in the past 50 years, North America has lost some 30% of its entire bird population, or around 3 billion birds.

“The biggest culprit is habitat segmentation,” Capra said. “The little conservation areas that developers set aside aren’t enough to sustain species.” He said about his own neighborhood that he never anticipated that he would see the amount of development occurring there now.

But Capra the birder perseveres, documenting what’s out there. He is a volunteer with the Florida-wide EagleWatch program coordinated by the Audubon Center for Birds of Prey. In that role, he closely observes activity at two bald eagle nests, one at Deer Lake State Park and the other at the eastern edge of Watersound.

I noticed that Capra’s computer had been placed on top of a copy of Baseball, a book by the documentary filmmaker Ken Burns.

“I follow the Orioles — all those years in Baltimore.”

I resisted the impulse to tell him that he would be better off following the Blue Jays or the Cardinals. No need. Capra knows his birds.