To attract birds, find ways to meet their essential needs

The 2018 Category 5 event referred to simply as “the storm” throughout much of Northwest Florida had impacts both dramatic and subtle.

People would learn well after the big blow passed that Hurricane Michael had acted as a giant seed-dispersal agent. As a result, plants started popping up in yards where they had never been present previously.

At Richard Duncan’s place, Virginia creeper, a vine that will crawl along the ground and scale fences, threatened to overtake his backyard. Duncan whacked at it and whacked at it some more before thinking to research the plant. Turns out, Virginia creeper attracts a species of moth whose caterpillars are preferred baby food for cardinals.

The creeper wasn’t so grim after all.

“I repented and made peace with it and let it go wild,” said Duncan, who owns the Wild Birds Unlimited store in Panama City. The business sells wild bird foods, feeders, birdbaths and such, and its owner is an itinerant speaker whose favorite topic is “Backyard Birding.”

“I emphasize to people that if they want to see birds, they should envision their yard as a bird habitat,” Duncan said. “If more people repurpose their yards to make them attractive to birds, we can collectively make up for a lot of the wild habitat that has been lost.”

Duncan said birds require four elements in a place to hang out: food, water, shelter and a place to raise their young.

“Native trees and plants are critical to bird activity,” he said, “because they attract native bugs. Exotic plants may look pretty, but the bugs don’t use them in the same way. If you use native plants, hopefully you can get away from using pesticides. When you kill the bugs, it affects the bird population.” 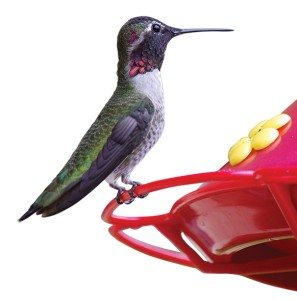 Duncan said that if you are to plant a tree with birds in mind, make it a live oak. The hiding places provided by its rough bark attracts some 142 insect species.

But the first step in attracting birds is through their gullets.

“Establish a foundational feeder,” Duncan said. “Supply it with food continuously and, over time, as the birds discover it, the feeder will become a reliable foraging source for them.”

A simple tray or platform feeder is a good one for starters because it is open to the sky and birds can readily detect the food it contains.

“Birds find food via discovery,” Duncan said. “They don’t follow scents. Birds love platform feeders, many different types of birds can feed from them, and they find them quickly.”

For a time, a backyard hobbyist may be content to attract birds of any feather, but that is likely to change. Blackbirds, grackles and doves are bullies who dominate feeders and don’t pleasingly affect humans like bluebirds and goldfinches do.

Fortunately, there are ways to discourage the tyrants.

Blackbirds, starlings and grackles don’t much like safflower seed, which some of Duncan’s customers choose to feed exclusively, he said. Guards may be placed on feeders to prevent doves from using them. And feeders may be surrounded with cages that admit bluebirds, finches, sparrows and small woodpeckers but prevent entry by birds in black.

“That is one silver lining to the storm,” Duncan said. Before Michael, residents of Panama City’s once heavily wooded Cove neighborhood never saw bluebirds. Now, they are prevalent there.

“Bluebirds are not equipped to crack seeds,” Duncan pointed out. “They like bugs and fruits. People feed them a lot of dried mealworms. We sell ‘no-mess’ seed that has already been shelled. Bluebirds will eat sunflower chips if they don’t have shells on them. You can mix them with mealworms.”

There are suet feeders for woodpeckers and feeders built specially for bluebirds, and there are feeders designed to dispense nectar to some of the meanest and most adored birds that hover: hummingbirds.

Nearly 100% of the hummingbirds seen on the Emerald Coast are ruby-throats. Many pass through the area between mid-March and early June en route to Northern summertime haunts. Others remain in Florida to breed but become less apparent.

“Customers will say to me, ‘I don’t see my hummingbirds anymore. I must have killed them with bad nectar,’” Duncan said. “In reality, they’re here, but they keep to a small perimeter when nesting. Then, in the first week of August or so, we see returning birds.”

Duncan dismissed as a myth the notion that feeders discourage hummingbirds from undertaking migrations triggered by seasonal conditions such as shortened days.

“Feeders may make for a more supportive environment for birds, but they never become dependent on them,” Duncan said. “By putting feeders or other sources of nutrition out there, you are increasing the opportunity for birds to thrive and breed successfully. It’s like we humans have Healthy Start. A higher percentage of the offspring make it.”

In recent years, Duncan said, customers have reported that a growing number of Western hummingbirds, including rufous and black-chinned varieties, have been spending winters on the Emerald Coast versus migrating all the way to Mexico, as they typically do.

Migrations and the shoulder seasons, Duncan said, are the best times of year to make unusual sightings.

“Our motto for the store is ‘Bringing People and Nature Together,’” he added. “I hear it from people over and over again: There is peace that comes with watching the birds.”

Birding Hotspots on the EC