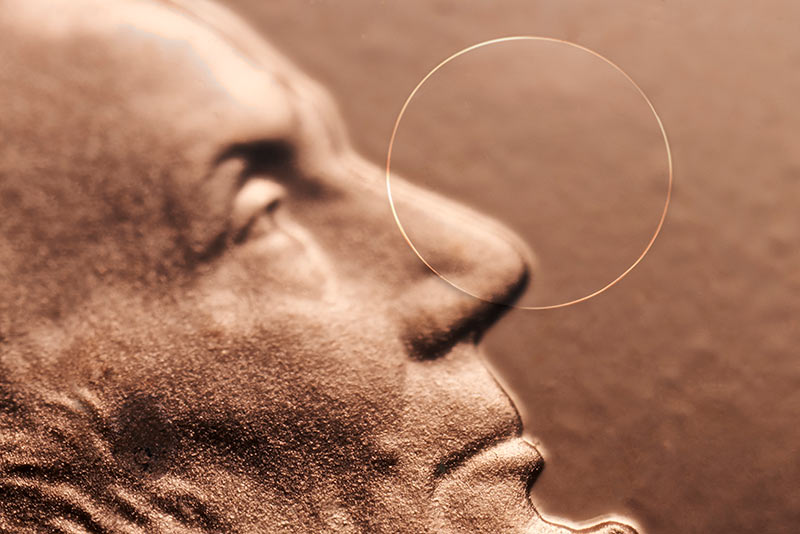 The circle represents the size of a Raindrop inlay as compared to a penny. The inlay is placed inside the cornea to enhance near vision.

It’s not the first time that the Eye Center of North Florida has emerged as an early adopter of new procedures and devices, but it is the latest.

At this writing, the Eye Center, with headquarters in Panama City, is the only ophthalmology practice between Hattiesburg, Mississippi, and Jacksonville offering Raindrop near-vision inlay surgery, a procedure designed to compensate for the inescapable effects of presbyopia.

Presbyopia, explained Dr. Bret Fisher, the Eye Center’s medical director, is “God’s gift to all of us who are over 40.” It’s the loss of the autofocus function of the eye due to diminished elasticity of the lens and weakening of the muscles that control it.

“Your eye has a lens just like a camera that shifts your focus from near to far and vice versa,” Fisher said. “If your eye is otherwise normal and you are 20 years old, you can look down the road and read a billboard and then you can look down and read a fine-print novel. When you are 45, that billboard may remain in focus, but it’s harder to read that book or that menu or that cellphone.”

Or that map — and if you are 40-plus, there is a chance you still have such a thing in your glove box and know how to fold it.

The Raindrop procedure does not bring back autofocus ability, but the inlay — a tiny disc about the size of a pinhead that is placed inside the cornea of the non-dominant eye — does serve to expand range of vision and obviate a need for drug-store “cheaters.”

“Certainly, you can wear reading glasses to deal with the issue, but this is more than a vanity surgery,” Fisher stressed. “We are enabling people to see clearly at mid-range and close range by restoring a functional component of the eye.”

The disc, said to be “biocompatible,” is similar to a soft contact lens and comprises 80 percent water. It works by changing the curvature of the center of the cornea.

Fisher assesses candidates for the surgery individually. They need to be of an appropriate age between 40 and about 60, when cataracts begin to develop. The cornea must be sufficiently healthy and thick. The inlay is placed beneath a lasik flap, comparable to the way in which laser vision correction is performed.

The surgery takes only about 10 minutes and patients may resume normal activities a day later, but need to be willing to faithfully use eye drops for three months. The drops ensure that the eye heals properly and that the Raindrop disc is accepted. Should the patient be displeased with the outcome for any reason, the disc can easily be removed. Left in, it will see the patient through to the age of cataracts.

Jerry Powell, 51, who underwent the procedure late in 2016, is delighted with the results and currently enjoys 20-20 vision for distance and at close range. And, as a designer for an engineering firm, he does a lot of close work. He was on the job a day after his surgery.

“I was working in the yard with a weed trimmer one day and it quit on me,” Powell recalled. “I called my neighbor over and he pointed to a yellow wire that had broken. I said, ‘What yellow wire?’ I hated wearing glasses, but I knew I had to do something. I would recommend Raindrop surgery to anyone.”

The procedure is not covered by the insurance industry, which places it in a league with cosmetic surgeries. The cost for the Raindrop inlay at the Eye Center of North Florida is $3,500, which includes the procedure, drops, evaluation and follow-up care for a year.

The developer of the Raindrop surgery, Fisher said, is rolling it out slowly by making it available only to selected doctors whom they trust to deliver the same results that patients enjoyed during clinical trials.

In that regard, Fisher qualifies. He completed undergraduate studies and went to medical school at Duke University before studying his specialty at the Wills Eye Hospital in Philadelphia, consistently ranked among the top three eye schools in the country. He has practiced in Panama City for 24 years and previously practiced in San Diego.