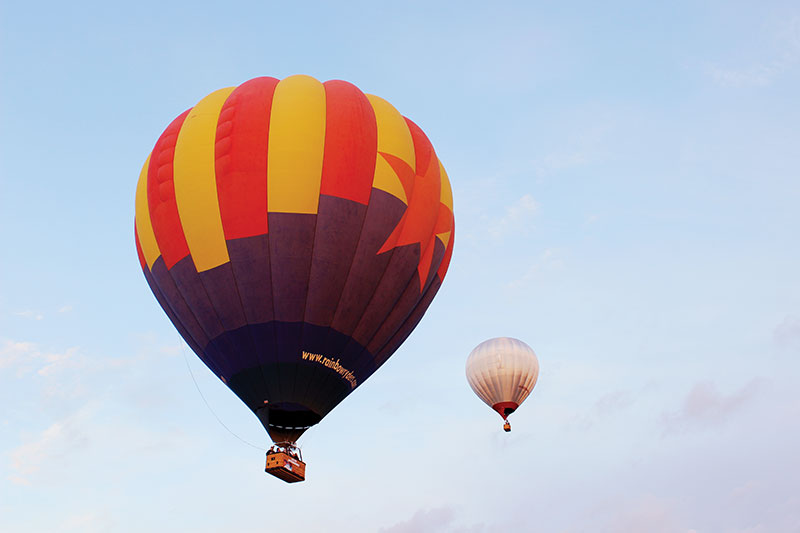 It is still dark when the driver turns into a deserted field, and we’re asked to sign a waiver releasing the company of any harm or damage (or death) that may occur during the flight. But I’m not intimidated; Hot Air Expeditions is one of the longest-running balloon companies in Phoenix, and this is a rare opportunity to check a box on my “bucket list.”

Like many, my bucket list previously lacked an action plan and timeline. And while I wouldn’t consider heading into a business meeting without a plan and timeline for accomplishing my goals, my personal goals often fall by the wayside with no plan for achievement. Fortunately, this day changed all that. This was a day that had been meticulously planned and anticipated for months.

As we exited the van, the pilot came over to greet us and immediately placed us at ease with his warm, friendly welcome. The patch on his jacket from the 1995 Tempe Balloon Festival communicated his 20 years’ experience, and we came to learn that our pilot, Bill Heck, flew his first hot air balloon in 1979.

Flight preparation was fun to witness. The team jumped to action, unrolling and filling the massive, multi-colored balloon with giant fans. As the balloon filled, we were quickly dwarfed by its towering size. We climbed into the basket as Captain Bill fired the loud burners, and swaths of heat warmed our heads and shoulders. (Tip: The spot closest to the middle, by the captain, is the coolest.)

With the burners firing, the basket slowly left the ground and the crew gently released us into the air from below. Leisurely ascending into the sky, we rose above the morning fog, which remained heavy on the surrounding mountains.

The balloon began to soar, and we felt weightless. Floating toward the clouds, the balloon was at the mercy of the wind, rotating clockwise like a revolving restaurant. At our peak, we reached 3,000 feet above the ground. The greater Phoenix area enjoys ideal conditions for ballooning due to varying levels of wind currents and protection from surrounding mountain ranges, which also provide spectacular views. It was quiet and peaceful as we gracefully floated through the sky, taking in the sights below. While in the air, our captain shared facts and stories about the area while taking intermittent breaks to fire the tanks and pilot the balloon.

After an hour of soaring, Captain Bill identified a suitable landing spot and radioed the ground crew. We began our descent and could see the crew in white vans making their way carefully across the desert terrain. Captain Bill expertly and gently lowered us over the barren desert, and the calm morning allowed our basket to gently reach the ground safe and sound.

Once again, the crew jumped to action, helping passengers disembark and deflating the balloon while other team members prepared breakfast. In no time, the crew rang the breakfast bell and we gathered at the tables, which were beautifully set with a green tablecloth and hot air balloon-themed china.

After pouring champagne and orange juice, Captain Bill led us in the balloonman’s toast. As our glasses met, the memories of our incredible experience soaring over the Sonoran Desert were sealed forever. More importantly, the experience served as a wonderful reminder that bucket-list adventurers deserve priority status on the “to do” list of life.