An Answer to Times Square 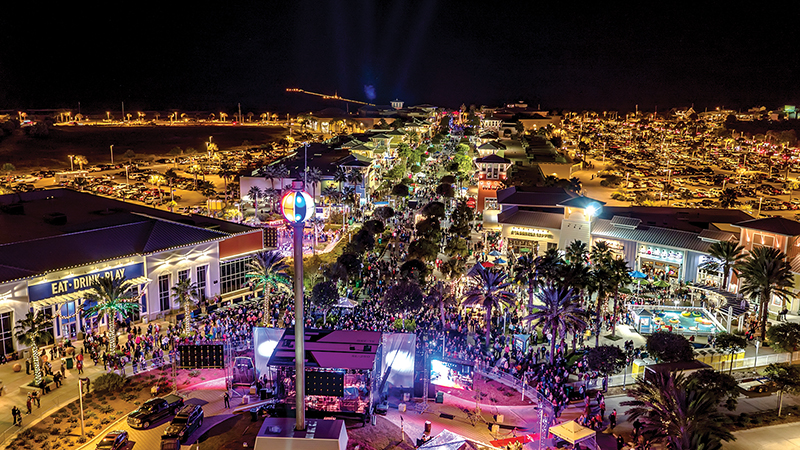 Each New Year’s Eve, the Big Apple vaunts itself as the glitziest, most glamorous city in the country by dropping a six-ton Waterford crystal ball from a tower in Times Square. In the relatively laidback community of Panama City Beach, Florida, it makes more sense to drop inflatable beach balls on New Year’s Eve — 10,000 inflatable beach balls, actually, plus a glowing 800-pounder.

Richard Sanders, vice president of Sports Marketing and Special Events for Panama City Beach, explained how the Beach Ball Drop, which will celebrate its 10th anniversary this year, was born.

“In May of 2008, just before a TDC (Tourist Development Council) board meeting, I walked past our president, Dan Rowe’s, office and told him we needed to do a beach ball drop on New Year’s Eve. He called me back to his office, and we discussed why.”

At the time of Sanders and Rowe’s conversation, not much was happening in Panama City Beach after Labor Day weekend. The beach ball drop idea, which appealed to Rowe as much as it appealed to Sanders, seemed like a way to change that.

At the board meeting, during his President’s Report, Rowe brought up the idea of the New Year’s Eve PCB Beach Ball Drop.

“It received no reaction from the board, so we thought it wouldn’t happen,” Sanders says. “But the next morning, on the front page of the local newspaper, it said, ‘TDC to do a Beach Ball Drop.’”

And that, as they say, was that.

Although Pier Park was less than a year old in 2008, it was already emerging as a popular shopping center and entertainment hub, and Sanders and Rowe decided to introduce the idea of hosting the event to decision-makers there. Felicia Cook, the  marketing director for Pier Park, thought the beach ball drop was a great idea. She, in turn, pitched the event to Simon Property Group, which owns Pier Park and which ultimately approved the ball drop and secured an animated, spinning, flashing beach ball, which descends nearly 100 feet during the countdown to midnight.

For the first eight years, the glowing ball made its drop with the help of a construction crane. In 2016, however, the TDC installed Celebration Tower — a permanent, stainless steel pole for the beach ball to sit on all year and glide down on New Year’s Eve.

The ball changes its form throughout the year based on the season or holiday, or if an event is taking place in PCB. For example, during the weeks leading up to Halloween, the ball becomes a glowing jack-o’-lantern; during the Fastpitch World Series, which is held each year at Frank Brown Park, the ball effectively becomes an enormous softball. It’s only on New Year’s Eve, however, that the ball makes a descent from Celebration Tower.

“The first year, there were approximately 7,000–10,000 attendees at the Beach Ball Drop, and several accommodations sold out for New Year’s Eve,” Sanders says.

The next year (2009), the children’s inflatable beach ball drop was added, and the event became even more family oriented.

“Today the beach ball drop is one of our most successful landmark events, with local TV coverage leading up to the drop,” Sanders says. “According to the fire marshal, we are pushing close to 50,000 attendees from throughout the United States, with the heaviest concentration from the Southeast. There are a lot of our northern winter residents — our snowbirds — that attend, also.”

Who  Everyone is invited to this free event.