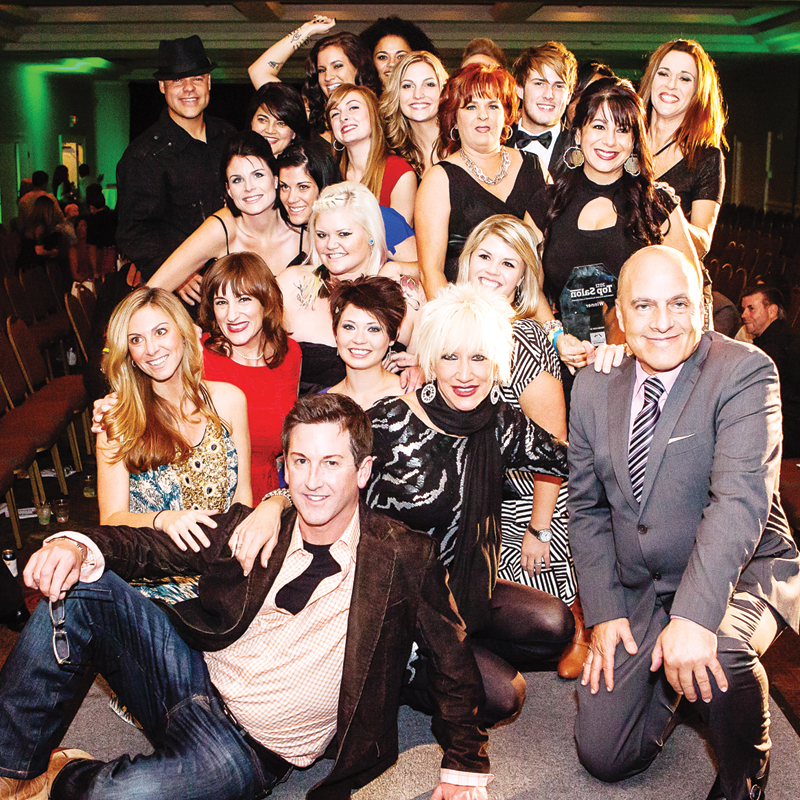 Generous sponsors like Dr. Stephen Clark from Bluewater Plastic Surgery and industry expert judges Marsha Doll, Ron Faircloth and Carrie McNeill celebrate on the LeCiel at Sandestin catwalk with model Lori Bennett and her style team from two-time winner As You Like It Salon. Photo by Shelly swanger Photography

A tranquil drive along 30A in Watercolor shattered Lori Bennett’s life. In an instant, the serene scene changed to horror as a Volvo driven by a drunk driver crashed head-on into her Dodge Caravan. The blow broke most of her teeth. Her liver, bruised from the collision, swelled to twice its normal size. Bennett was cut out of her driver’s seat. The other driver walked away.

“The accident changed my whole outlook on life,” said Bennett, now 48, who described herself before the Aug. 12, 2006, accident as someone who could do anything. Now, it was hard for her to smile.

After leaving the hospital, the Navarre wife and mother of three adult sons retreated. For the next five years, she lived a life of seclusion, staying home and eating only soft foods. She feared strangers would laugh at her appearance. A head injury made impossible even the simple things, like recalling how to get home.

Presented with an opportunity to emerge from her seclusion, Bennett agreed to compete as one of the 10 models for Emerald Coast Top Salon 2012, an annual charity fundraiser and the premier salon industry event in the area. Top Salon has become a highly anticipated community event. Locals vote to nominate salons, and then the 10 salons that garner the most votes are chosen to compete by Rowland Publishing Inc., the publisher of EC Magazine. Competition rules require salons select a model, make her over in 24 hours and send the model down the runway on event night.

The true focus of the event is the philanthropic aspect. Each salon selects a charity. The winning salon’s charity receives a portion of the event’s proceeds and a $5,000 Media Sponsorship from EC Magazine. The salon also wins a yearlong ad campaign in EC Magazine valued at $10,000. The presenting sponsor, Bluewater Plastic Surgery, supported the event’s costs and provided facials and body treatments. Retailers at Destin Commons provided clothes, shoes and jewelry worn by the models.

Daniel Lewis, Dallas salon owner and Bravo’s outspoken “Shear Genius” fan favorite, has hosted Top Salon since it first debuted in 2011. A true salon celebrity, he easily charmed and energized a live audience of hundreds, working off the crowd while pop music and Broadway style lights turned up the night’s energy. “Every model has been touched by something in their life. Did you see those women’s before and after pictures? Life can take a toll,” Lewis joked. “Without too much effort you can pick yourself up and look good. From that comes peace and health.”

Bennett was hoping to find a job in November 2011, when she began vocational rehabilitation with Horizons of Okaloosa County Inc., located in Fort Walton Beach. Here she met Dr. Julie McNabb, the chief executive officer and a client of As You Like It Salon in Mary Esther, who helped Bennett find temporary employment at Island Golf.

When As You Like It was selected as one of the finalists to compete, co-owner Jen Perlman chose Horizons as their charity and turned to McNabb for a model candidate. “From my perspective it was going to help her find a job,” said McNabb, who suggested Bennett.

“Doctors were trying to give me all the medicine in the world, but they could not give me my confidence or my self esteem,” said Bennett. “I thought they [As You Like It Salon] could help me build up my confidence again and let me see who I really was.”

During the weeks leading up to the competition, salons assisted their models with clothing and shoe preferences and planned how to best make use of the 24-hour window allowed for the makeover. Long lasting friendships developed between clients and salons. Bennett’s friendship with the As You Like It Salon owners began the instant they met at Island Golf for her “before” photos, which were taken two months ahead of the show. “Just my normal self. That’s what I did,” said Bennett of her attire for the images. “Baggy sweatshirts, baggy jeans.”

Said Perlman of the meeting: “I couldn’t wait to see all we could do for her. Lori had long hair, waist length. She had two inches of new growth that had to be colored.”

Perlman helped Bennett rehearse for the show in October with one of the judges, Marsha Doll, a professional talent scout and model coach. “She was teaching me how to walk, be sassy and smile,” said Bennett.

At 5 p.m. on Nov. 9 the salons and models set to work. As You Like It’s team of seven salon professionals began by treating Bennett to her first facial and a haircut. The hardest part for Bennett was adjusting to a much shorter hair length, just above her shoulders. “Oh my God, it’s all gone,” she said, touching the back of her neck.

“Brow shaping made her eyes pop,” said Perlman. “Wow, there they are, very blue eyes.” Bennett’s hair was straightened, and her all-over gray was colored an auburn shade. “I think I got six hours of sleep,” said Bennett, going home around midnight.

By noon Saturday, she returned to the salon. Top of the list was a manicure and pedicure. “They soaked my feet in hot wax and I said, ‘You’re kidding me, right?’ ” Hair styling, makeup and some dress alterations completed the look. At five that evening, under guidelines established for the show, all work ceased. As the sun set, a black stretch limousine arrived at the salon. Bennett and Perlman settled in for the 40-minute ride to LeCiel at Sandestin, the chic venue for the hot salon industry event.

The biggest challenge was not cosmetic. The inner transformation of Bennett from a quiet woman who lacked self-confidence to one who could walk with satisfaction on the runway without fear, facing an audience of strangers, required mentoring, which Perlman and the salon team offered.

“Saturday night I was psyching myself up saying, ‘You can do this,’ ” said Bennett. Before the audience entered the ballroom, she practiced walking the runway again. Even though her high heels kept sticking on the carpet, she was not deterred.

As the sound of music floated across LeCiel’s poolside food and drink bars under a cool, starry night sky, chefs served choices of pasta or roast beef prepared to taste. Salon teams, noticeable by their themed attire, chatted poolside with friends, guests and clients to celebrate in the final reveal of the stylists’ hard work over the past four months.

Backstage, Bennett was sweating. The show was about to begin, and guests filled the ballroom. “The biggest obstacle was having all those people in the audience staring at me,” said Bennett before she stepped out, the eighth model to appear. She stepped behind a large backlit screen. Shaky and trembling she struck a pose, creating a silhouette as “Let’s Go,” by Calvin Harris featuring Ne-Yo, pulsed.

Her husband of 18 years had not seen the makeover until her heels touched the runway. “I about fell out,” Bill Bennett said. “She’s completely different. I like it.” Bennett, hyperventilating, returned backstage.

With the votes in, the models assembled on stage for the results. There, Bennett heard, “And the winner for the second year in a row is As You Like It.” Then, she heard her name.

Bennett said she felt like “something coming out of its shell.” Her confidence restored by the experience, this “model” winner is eyeing a bright future and plans to attend veterinary technician school. “Now, I’m not afraid of anything, and I like it,” she said.