The Joy of Koi

Buz Ireland never has strayed far from his roots. He lives in the house his grandfather built on 200-plus acres purchased in the 1920s.

As a boy, Ireland explored nearby woods and played in streams that run to Tallahassee’s Lake Jackson. He smilingly recalls fishing trips with his dad and vacations in North Carolina where, he said, “I loved the rocks and the water.”

That love has proved undying.

After a 30-year career spent in the state Department of Banking and Finance’s computer center, Ireland launched Aquafeatures, a business that enhances back yards with ponds and streams and other water works. He’s been at it for 17 years.

“I’m not like a dentist or an auto mechanic,” Ireland observed. “I get to create something beautiful that people truly want.”

For Ireland, a water feature is like a campfire.

“You sit by it and listen to it and you can’t stop looking at it,” Ireland said. “It’s peaceful. You have people over and you can just stare at the water if you don’t want to talk.”

(Ireland, as it happens, uses words, even letters, sparingly, as evidenced by the single “z” in his first name.)

For Ireland, a water feature is incomplete unless it includes aquatic plants and fish, typically koi, the large and colorful cousins of the goldfish you brought home in a bowl from the county fair when you were a kid.

“The fish know me,” Ireland said. “I feed them every morning, and they come rushing toward me because they know they are about to get breakfast. I’ve known people who have trained them to eat pellets out of their hand.”

Ireland recommends that people start with small fish when ponds are new. By letting fish mature with plants, they always have cover to hide under, thus escaping detection by marauding owls and hawks. Plus, new systems with low bacteria levels may be overwhelmed by the waste produced by large fish. 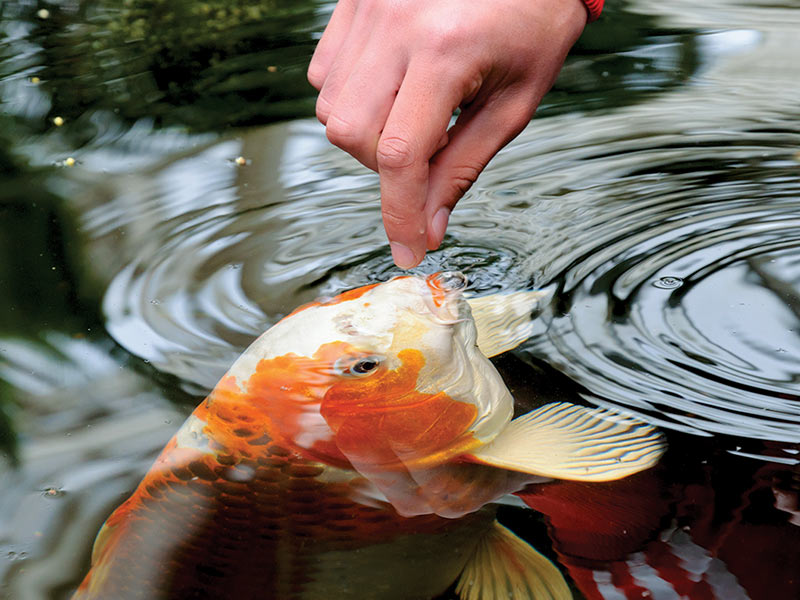 He has customers who have flown to California to handpick individual koi that have been imported from Japan.

For Morris, the koi pond business has been steady, but not as popular as pondless water features, which are more easily maintained.

Algae buildups can be a problem for pond owners, along with debris from trees and fish-eating predators, especially herons, particularly during the winter months when food becomes scarce.

“We find that if we cover a pond with a net for a few weeks, herons will move on,” Morris said. “They may visit two or three times before they give up, but eventually they will.”

Pond owners may also criss-cross fishing line across their ponds as a bird deterrent or resort to commercial devices such as a motion-detecting sprinkler.

“There was a small hole in the ice to let gases escape, but otherwise the pond was left alone, and when it thawed out in the spring, the koi came back to life and they were fine,” Ireland said.

Once, he was hired to restore a pond that had been ignored for more than two years.

“No pump, no aeration, no algaecides, nothing,” Ireland recalled. “And there were two large koi in there that had somehow managed to fend for themselves.”

How do you go about creating a water feature? The easy answer is “one rock at a time.” Ireland prefers field stone and mossy rock from Tennessee.

“People will show me a picture of what they want and the best I can do is to tell them I can come close,” Ireland says. “Every rock has its own character and you have to try to visualize how the water will flow around it.”

Ireland loosely stacks rocks, never cementing them. You never know when you may need to dismantle things for maintenance purposes.

Morris said the ponds he builds cost an average of $8,000. He recommends that homeowners build ponds, themselves, if they can do so for $2,500 or less.

“Features with ponds require a little more work,” Ireland said, “but for me they are worth it.”

And don’t forget the fish.

They add, we must say, a certain je ne sais koi.

There’s Nothing Coy About Chagoi

Robin Bateman is good with varieties of koi including kohaku, sanke and showa, but she reserves a special fondness for chagoi. “Koi are like dogs,” she said. “They have different dispositions, and chagoi are the friendliest of them all.” Unlike more flamboyant koi that sport spots of red and black on white backgrounds, chagoi, Bateman said, are coin-colored — often copper and sometimes silver. “You should come out to our place and I would let you pet them,” Bateman said. She and her husband, Michael, operate Seven Hills Koi and Aquatic Plants in Tallahassee. The business, which Robin prefers to call a hobby, developed accidentally. “We breed the koi and wind up with so many fish that we couldn’t possibly keep them all,” Bateman said. The Batemans sell koi for about 10 bucks each when the fish reach six inches or so in length. Probably a good thing. If Robin were to let her koi get any larger, she’d become attached to them and, at some point, run out of names. — Steve Bornhoft