You may have heard of Steve’s Beez: Liquid Gold Apiary & Bee Removal

After over two decades as an A-10 fighter pilot and a flight instructor in the Air Force, Lt. Col. Steve Baldock hung up his spurs.

That was in 2002. As so many military fliers do after retirement, he’d eased back on the throttle for a few years as a program manager for weapons systems development in the Civil Service. Steve finally stepped into mainstream civilian life, way too young to descend into some cozy oblivion of golfing and Caribbean cruises.

He’d been stroking his chin and staring into the distance, wondering what to do for a second career. Then, something led him to attend a meeting of a local beekeepers club, an occasion so unpremeditated and yet so right on, it must have been fate. Something clicked with him after that. He watched a club member remove a wild hive and knew that this was the way to go!

Baldock was amused at my mention of Idgie, the unschooled, bee-whispering girl in Fried Green Tomatoes who reaches into a hollow tree, pulling out honeycomb with nary a sting. He chuckled at my tongue-in-cheek suggestion that being attracted to bee removal must represent an addiction carried over from his wild and wooly career as an anti-tank fighter pilot. 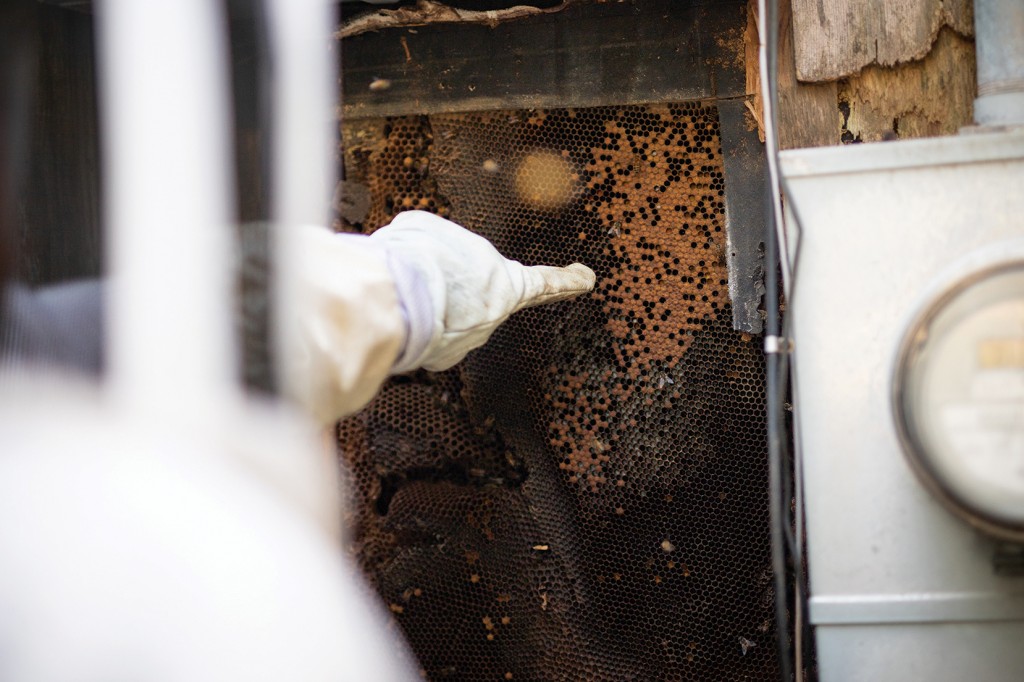 The queen bee lays eggs that become larvae and then pupae. Nurse bees cap cells at the pupae stage, and eventually a new bee emerges. Photo by John Harrington

“Well, there’s not much to compare with tearing along, just off the deck, guns blazing, at 300 or 400 miles per hour,” Baldock said, “but you could say they’re both buzzes, I guess!”

Later he would remark, “I sometimes think that if I’d been introduced to beekeeping at age 7 instead of 57, my life might have been different. I was originally from around Peoria, Illinois, prairie country. I can remember, as a kid, charging around through these fields of white clover with friends and always steering clear of wherever they’d stationed the beehives. The idea that those bees were just waiting to come out and sting you added excitement to a sleepy summer vacation!”

Fear of bees is something that many people carry over into adulthood. Discovering a hive in the soffit of a house or the tool shed or even a nearby cable junction box will set them to ringing up a commercial pest control business, which promptly arrives and wipes out the whole colony.

“Not me!” Steve declares. “Save ’em. They’re apis meliferis gold!”

So far, Baldock has removed around 150 hives. His charges vary with the circumstances but, at max, are no greater than a pest control aphicide. Plus Baldock entitles his customers to a portion of the recovered honey, a sweet rebate considering the retail price is currently between $8 and $10 a pound.

Baldock admits that having a honey beehive in one’s house isn’t exactly like having a crock of honey in the cupboard one can dip into at will. Hives can grow huge, and they’re almost never readily accessible.

One such wild hive, discovered between wall studs in an abandoned house, was 10 feet long and yielded more than 128 ounces of honey. One can imagine how such a hive, if abandoned by bees, might result in a major mess with honey oozing under baseboards and attracting undesirable critters, both macro and microscopic.

“It’s usually necessary to open up walls or soffits to remove the hive,” Baldock said, “but if possible, I always try to go through drywall inside, rather than outside through the siding.” 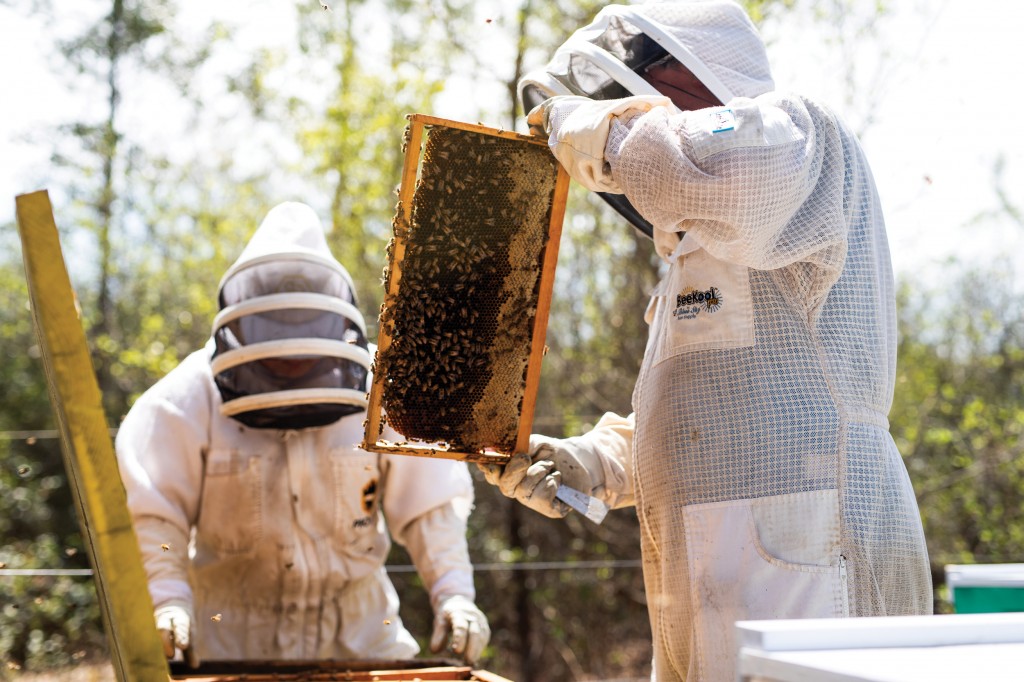 Baldock’s conservationist approach — as opposed to the scorched-earth, pest control type — means first locating, then removing the queen using a special device called a “clip” from the problematic hive. The queen is then placed into the familiar white box called a Langstroth hive.

The new hive is left nearby until the worker bees follow their sovereign into her new digs. If there’s any problem with the workers moving voluntarily, Baldock has a special vacuum device he uses to carefully suck them out of the old hive and waft them into the new Langstroth condo.

Baldock currently husbands 35 hives, 30 of which have come from Steve’s Beez removals.

“This spring, I’ve got hives stationed west of Freeport for gallberry honey and for tupelo honey, up at Mossy Head,” Baldock said, “all behind bear-proof fences.”

In times when pollution, climate change and the depredations of the varroa destructor mite are affecting bee colonies, farmers and gourmands alike are concerned — farmers about the possible loss of the bees’ irreplaceable services as crop pollinators and gourmands with sweetening their yogurt.

Steve’s Beez represents not only a useful domestic service but an environmental act of faith. Baldock’s obsession seems as much a calling as a business, and it’s hard not to perceive, in his fascination, some deep affinity for the bees. Not hard to believe, yet elusive to understand.

Perhaps it is their dual nature as agents of both sweetness and pain that creates a bee’s mystique, making them somehow uncanny.

Honeybees have a special mana in most cultures. In England, there survives a tradition of “telling the bees” about marriages and deaths in a beekeeper’s family. Ancient Greeks saw in honeybees souls awaiting birth.

For some, maybe a second birth.