Dr. Roger Smith and his team has uncovered an interesting past of Pensacola Bay

Florida’s Lost Galleon is an anthology that addresses the history and archaeological excavation of a shipwreck in Pensacola Bay. Its component parts add up to an investigation that brings Tristan de Luna’s 1559 landing at Emanuel Point out of the vague, legendary past in a way that archives and memorial statues cannot.

This book is bound to fire up readers’ imaginations in spite of its sometimes academic presentation. For Pensacola residents, the fruits of the Emanuel Point shipwreck will spark “ah-ha!” connections between de Luna and many of the city’s business and street names.

Galleon’s editor-cum-researcher, Dr. Roger Smith, plus his team of five underwater archaeologists and a multitude of volunteers and interns, succeeded in the mid-1990s in drawing back the curtain on a perennial drama of hurricanes, politics and conspiracy theories that can’t fail to twig with latter-day Floridians.

Guided by Spanish archives, and underwritten by the Florida Bureau of Archaeological Research, Smith and team were engaged in 1992 in a magnetometer survey of west Pensacola Bay, the outcome of which substantiated the history of the de Luna expedition beyond just another obscure New World legend.

The archaeological team, we learn, painstakingly placed a PVC grid over the excavation site; classified artifacts; removed mud and oysters from the wreck; and completed an architectural analysis of the ship’s construction — all pure Nat Geo stuff. Ditto the lab preservation of significant finds.

The colonists had originally salvaged everything they could from the grounded wreck. The types of articles left behind can be found in most homes today: pots, pans, shoe soles, roach wings and such. 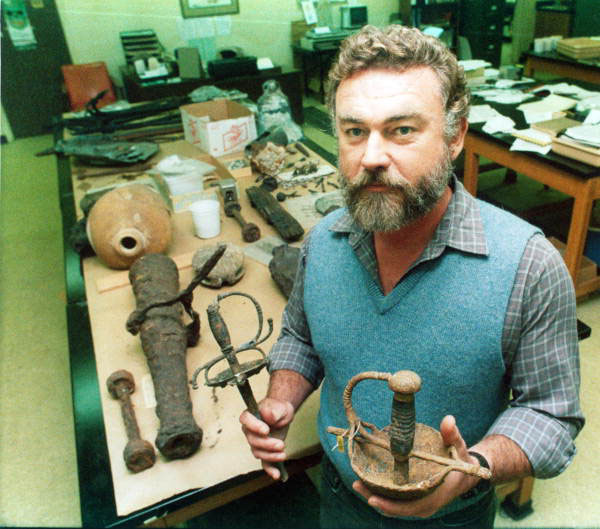 Then state archaeologist Dr. Roger Smith, in this photo from 1987, displayed artifacts curated by the state Bureau of Archaeological Research. The bureau is responsible for objects collected on state-owned and state-managed lands. Photo Courtesy of State Archives of Florida, Florida MEMORY

But three intriguing clues to the mariners’ mindset were found at the junction of the ship’s main mast and keelson, considered to be the center of a sailing vessel’s “life force.”

In one photograph from the wreck, a crude cross is carved into the mainmast’s support. Found in the adjoining woodwork was a small, hand-carved profile of a galleon, reminiscent of a “Milagros,” that protective amulet still found today in both Mexico and Spain. Smith, who found the piece himself, said, “I wondered whether I had perhaps discovered the ‘soul’ to the ship.”

Also, when “stepping” the mast for the first time, a ritual vital to the ship’s good fortune was placing a coin under the foot of it, in the mortise. This was not a treasure ship, and over the course of the excavation, only a single coin was found. Since the colonists were likely to have hung their personal funds around their necks, one can’t help but wonder if the found coin was … .

Today, the Emanuel Point shipwreck has become symbolic of the de Luna colony overall. In an era when maps of the Gulf Coast were only awkward approximations, the fleet landed in late summer on the west side of Ochuse (Pensacola) Bay.

Six weeks later, the colonists were still keeping much of their supplies on board ship, thinking them safer there than on land. Then, on Sept. 19, the cautious colonists had that most quintessential of Florida experiences: getting hit by a hurricane. Four of 11 ships sank. A fifth ended up amid a grove of trees. Most of the food stores were lost. The colonists managed to hang on until November, when the viceroy sent relief, along with the promise of another shipment come spring. But circumstances changed; instead, relief didn’t arrive until the next September.

Gradually over the next two years, the colony lost its political support. De Luna worked in growing desperation, disheartened by the growing attrition of the colony’s population and frustrated in his attempts to satisfy his patron’s mandate for an overland route to the Atlantic coast. Worse still was the growing dissent of his officers. Finally, when de Luna’s health failed and he fell delirious and calling for his wife, his subordinates remorselessly deposed him. By August 1561, the colony’s last contingent wobbled back to Vera Cruz.

Santa Maria de Ochuse would not become Pensacola for another 137 years. Too dangerous!

Since the initial excavation of the Emanuel Point wreck, two more de Luna ships have been located. It was high time, then, that in 2009 a statue of Tristan de Luna was erected on the harbor, where it stands unblinking as only bronze can be, searching for the entrance to Pensacola Bay.

Wight of the Living Dead

Defuniak Springs Sees Its Past As a Key to Its Future

Reminiscing On 20 Years of Trends