Michelle Caldwell is a veteran, CEO and founder of several organizations, a youth advocate, a 16-time foster parent and an adoptive parent of two children. But Caldwell is tightly focused especially on military veterans.

Both her father and uncle served in the military. Seeing her uncle return from Vietnam truly struck her with the weight that soldiers carry home from war and the struggles they face in returning to their communities. As an adult, Caldwell was inspired to join the military after volunteering with a missionary group while in college. She served in naval aviation from 1985 to 1989.

Now, Caldwell is working on a number of projects through the Monument to Women Veterans Museum, which opened in November 2021. The museum is located in Pensacola in what used to be the Amtrak Station. Pensacola lies within Congressional District 1, which ranks No. 1 in the country for the number of military personnel and veterans per capita.

In starting the nonprofit MWV 10 years ago, Caldwell assessed programs for veterans in her area and identified unmet needs. She found that the greatest void was in services for women.

The museum is just one piece in the greater machine that is the MWV. Caldwell has big plans for the old Amtrak Station. What she is creating there will serve as a campus for veterans, regardless of gender, who are returning to civilian life, and it will include a monument to honor female veterans. Already, Caldwell is using the facility to its full capacity.

The building is home to an exhibit area with ever-changing collections highlighting current and past female veterans. The museum serves as the face of the campus that Caldwell is creating. A National Visitor and Training Center and the Center for Strategic Military Excellence will operate beneath the MWV umbrella. Programs will work together to help veterans gain access to benefits and resources and connect them with the tools they need to be successful in civilian life. 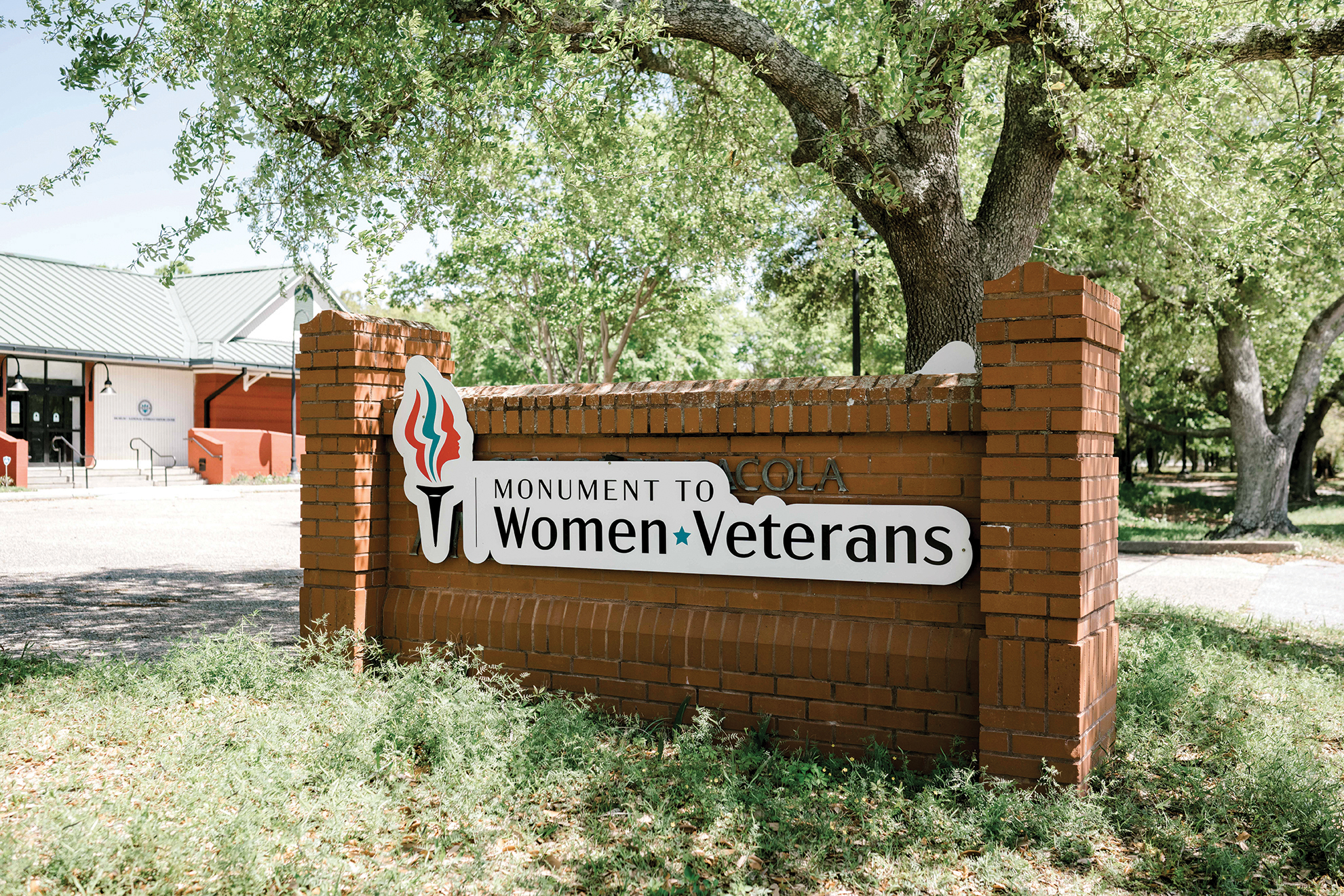 Located in an old Amtrak station that closely adjoins railroad tracks, the Monument to Women Veterans Museum is home to ever-changing collections that highlight contributions made by women via their military service. Photo by Jennifer G Photography

“We’re all about educating veterans on their benefits,” Caldwell said. “It’s imperative for us to have a building because when we build the monument, they will come, and we want to be ready for that.”

Caldwell believes in reaching out through partnerships with existing organizations that share similar philanthropic goals. The MWV Museum hosts training and classes that support veterans in workforce education and personal health. Subjects range from lead-based paint to yoga.

The organization started with the idea of erecting a monument for female veterans, and that plan is still in place. Through a public-private partnership, the City of Pensacola is working with MWV and Elizabeth MacQueen, an internationally commissioned and award-winning artist and sculptor, to get the monument built.

The design for the monument incorporates a pond with LED-lighted stainless steel flames reaching out and a green laser beaming from the top as a beacon. This laser beam will reach a height of 35 feet, which is as high as the Federal Aviation Administration will allow. For MacQueen, the beacon represents how “women are the light.” A floating elliptical band inscribed with the names of female veterans will surround the flames.

Years in the making, both Caldwell and MacQueen are eager to break ground on the monument. They are currently raising funds for a model that will be housed in the museum ahead of the monument build.

Caldwell views the monument as a testament to the three R’s of MWV: recognize, respect and recruit.

“We need to recognize that women actually have been in combat since 1948, we need to respect the service that they have brought to this country and then we need to recruit for the next generation,” Caldwell said. This is where she finds significance in the flames, seeing them as purifying and “a statement about the power that we bring to the table.”

LEADERSHIP
The Gulf Breeze Area Chamber Foundation named Michelle Caldwell its Community Leader of the Year for 2021. Contributions to her Monument for Women Veterans Museum may be made by visiting sherowarrior.com and clicking on the red box at the upper left corner of the homepage.