Love, Maturation, a Slip and Reflection

There are a couple of great lines by Thomas Ford — “I did but see her passing by; and yet I’ll love her till I die.” — about the instant recognition by the poet of his soul mate.

So, when Craig Bush, author of As I Watched You Go, has his main character, Albert Raines, start off his story with “The first time I saw Cathleen, I stopped frozen in my tracks … it was crystalline that she was a force,” one anticipates a prose analog of Ford’s poem.

What does follow is a valiant attempt at a twice-told love story narrated by Albert Raines. Albert is a small-town, Grayton Beach boy, apparently living his life by a watered-down version of the ’60s free-spirit ethos: skinny-dipping, a bit of cannabis on special occasions and a worldly “it’s all good” philosophy.

Cathleen is a mercurial, auburn-haired, Abilene, Texas, girl — a one-time marcher for civil rights with a touch of boyishness. When Albert first meets her, she’s down for the summer picking caterpillars off her Nana and Peepah’s tomato plants in Grayton. It’s a summer that sets the precedent she follows for years, slipping in and out of Albert’s sugar-sand world, unpredictable in a predictable — boy finds girl; boy loses girl; boy gets girl — way.

And after he gets her, the two marry. But Bush doesn’t stop with happily ever after. In a Faulkneresque mode, As I Watched You Go aspires to chronicle the lifelong passion between Albert and Cathleen and maintains the narrative beyond the lovers’ salad days through the age of Albert assuming his role as heir to Uncle Ned’s beach shop and the couple’s social maturation. There are Thanksgivings and Christmases with family, gay friends, the birth of daughter Miriam and Albert’s reflections on the cosmogony of parenthood, all wrapped up like a parable-burrito.

At this point, with everything going along this predictable path, Albert, pro forma, screws up. On a business trip to Savannah, he gets to drinking with a chick he’s met in a bar, and something predictable happens. Whether he imagines the peccadillo as his way to wisdom through epic excess or not, it stews like psychic indigestion in Albert’s conscience. Yet to spare Cathleen, he vows to carry it, unconfessed, to his grave. 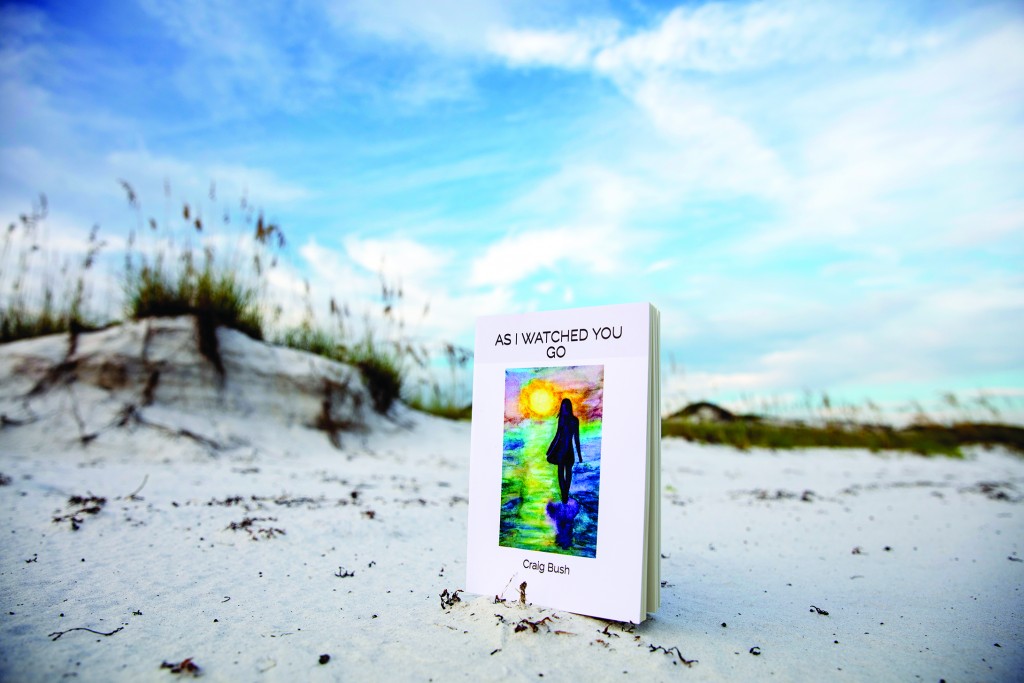 Turn the page of years, and an aunt dies. So does Albert’s son-in-law. His reflections insinuate it has to be all good, but meanwhile, what about life being short and needing to seize the day? Still, unable to bear the guilt of his Savannah indiscretion, he confesses to Cathleen. She forgives him, and his relief occasions a paean of contrition, rejoicing at how in their advancing years, they — surprise, surprise — still do it!

Albert succumbs to a deadly onset of nostalgia against a backdrop of present-day Panhandle. Gone is an organically evolved culture, replaced with one of slick advertisements and yuppie entertainment. Still all good?

And when the migraines that he’s suffered for years turn out to be more than just headaches, when he finally dies, it is the coup de gras of brain cancer that does the dirty work. Normally that would be it.

Two weeks after he’s died, on a “drizzly, cold and windy” morning, Cathleen and daughter Miriam take Albert’s ashes to   the beach and scatter them to the wind. After wife and daughter trudge home across the sand in the rain, holding hands, the story carries on with the usual reflections, sermonizing on goodbyes long and short, and more broadly on the pathos of human existence.

In As I Watched You Go, the author too often buries his main theme within the plethora of Emerald Coast place and people names — audience appeal — and has more than a few rough edges format-wise, a consequence of newly affordable, independent digital publishing.

The reader’s conundrum, however, is subtler. If Albert has been narrating the previous 200-plus pages but is now dust in the wind, who is relating how Cathleen and Miriam walk back through the drizzle holding hands?

Bush surely knows the writing ropes, having chalked up 10 other novels. It is inconceivable that an apparent plot inconsistency would be inadvertent. So, it is revealing that Bush’s bio-notes mention his admiration for Hermann Hesse, spiritual mentor of the ’60s counter culture through major books like Siddhartha and Steppenwolf.

Consider: Hesse died of a cerebral stroke, and Albert Raines meets his end also owing to a cerebral disaster event. Is Albert Raines channeling for another voice? Yes, that’s it. The voice that we assume is Albert’s must really be the title’s anonymous “I” watching not Cathleen, but Albert!

Can we call As I Watched You Go first person narrative then, or is the story actually being told by Siddhartha, or maybe Steppenwolf?

“There are goodbyes and leavings long and sudden. We may leave others or get left behind at various times in our lives. I grew up around good country folks, mostly. Many are unforgettable characters. Some still live in my hometown of Jay, Florida. Others have moved on to new places and subsequent lives. I know some of the most golden and wonderful people you can imagine. I have known a few scoundrels and no-counts. They all add up to a rich pool from which to pull characters worthy of development.” — Craig Bush

The 30A Coffee Table Book You Need to Have