Comprised of locals who love being at one with water

Ordinarily, he would have pulled back the bands on his spear gun and drawn a bead on the “suitcase,” as the thick-skinned fish are sometimes called.

But his partner, Fred Cardet, a retired orthopedic surgeon, took over by way of an agreement the two men had reached topside. D’Agostino was coming off rotator cuff surgery, and rather than allow him to risk setting back his recovery, Cardet helped out by preparing the gun for firing.

D’Agostino’s shot was true. The fish, placed on certified scales, topped 10 pounds, a world spearfishing record weight. But D’Agostino could not legitimately claim that distinction. Doing so would have required that he had harvested the fish unassisted.

“People care about records, they do,” said D’Agostino who, in particular, has been chasing the world record for red snapper taken with a pole spear for years, coming within a pound three times. “But I would rather have good friends who look out for my best interests than to have a record few people would ever know about.”

Such reasonable restraint characterizes generally D’Agostino’s approach to the sport of free diving, which, he said, “can be one of the easiest things you will ever do and also one of the most dangerous.”

D’Agostino is an instructor, certified by Freediving Instructors International, at Benthic Ocean Sports in Destin. Free diving has been his passion for 26 years. He was 20 when took a job as a lifeguard in his home state of New Jersey, and his supervisor, a man named Jeff Carpenter, introduced him to the activity.

“My very first day in the chair, I watched him go out and swim back and forth along a jetty with the Manhattan skyline in the background,” D’Agostino recalled. “He’s got a pole spear, fins and a catch bag. When he gets out, his bag is full of fish and I start peppering him with questions.” 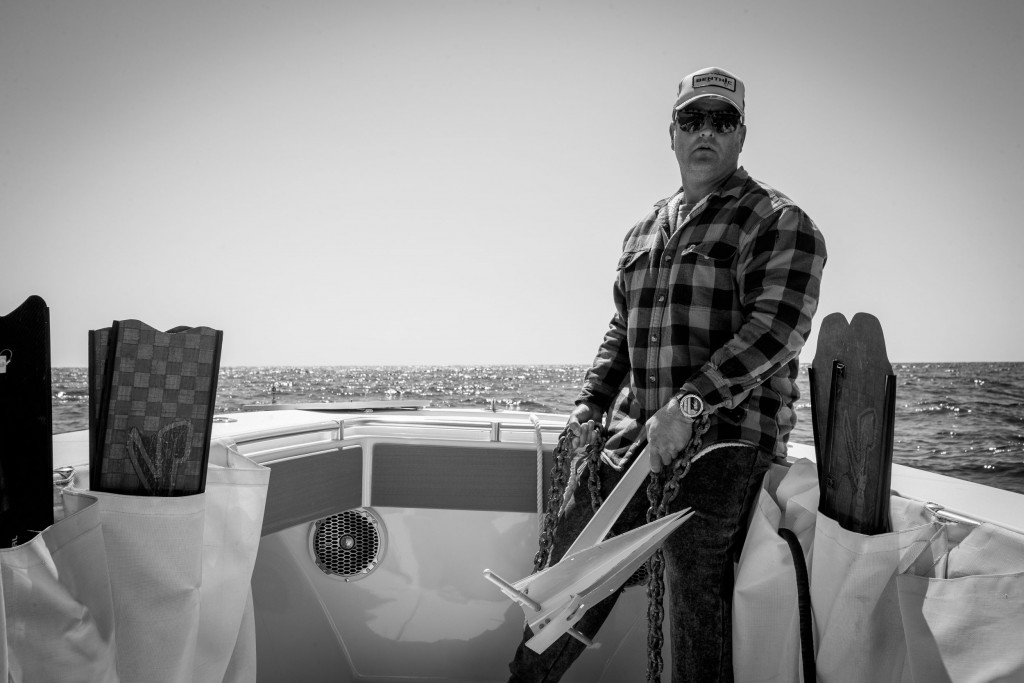 Joe D’Agostino prepares to set the anchor during a trip aboard the Spaniard 2. He was introduced to the sport of free diving as a teen in New Jersey by his supervisor at a lifeguard job. Photo by Sean Murphy

Carpenter invited D’Agostino to join him, in part because he was looking for someone to provide him surface support as a safety consideration. Soon, D’Agostino had gained his first experience as a breath-hold spearfisherman.

“I remember going down 12 feet, and it felt like what 112 feet feels like now,” he said. “I pulled back on the spear and shot a tautog.”

The fish was two inches short of legal size, a rookie mistake.

“But I knew in that moment that free diving was going to be a part of me for the rest of my life. I could go right back to the very rock where I shot that fish. I can tell you what the water clarity and temperature were that day. That experience is frozen in my mind.”

Free diving, according to D’Agostino, is the fastest-growing segment in water sports. Almost all of that growth relates to spearfishing, he said, although there are, he conceded, a few sightseeing free divers who frequent freshwater springs and lakes.

D’Agostino has made spearfishing trips to Australia, Fiji, Tahiti and Mexico. But he especially loves the northern Gulf of Mexico from the Big Bend of Florida to Texas.

“We have one of the best fisheries in the world right now,” he enthused, “from shallow-water species to blue-water species.”

The Level I class that D’Agostino teaches takes place in the course of a weekend.

“I have people come in here on a Saturday morning, and by Sunday at lunch they are 66-foot divers,” he said, adding that a student need only have basic swimming skills.

On Day 1, students receive a half-day of classroom instruction covering topics including the history of the sport, equipment, physics and physiology.

In the afternoon, instruction moves to a pool where students work on entering the water and moving from a horizontal to a vertical, headfirst posture. D’Agostino discusses safety issues and problems that may affect divers such as loss of motor control or blackouts. He teaches people how to “diaphragm breathe” versus breathing from the chest, and students then attempt breath holds.

Within three attempts, D’Agostino students manage to hold their breath for an average of two minutes and 45 seconds.

“Infants breathe from their bellies,” D’Agostino said. “It’s natural and more relaxing. Then we get jobs and spouses and mortgages and other stressors, and we start to breathe through our chest, more stress. If you breathe from your diaphragm, purse your lips and control your exhale, basically you are holding your alveolar spaces in your lungs open longer.” 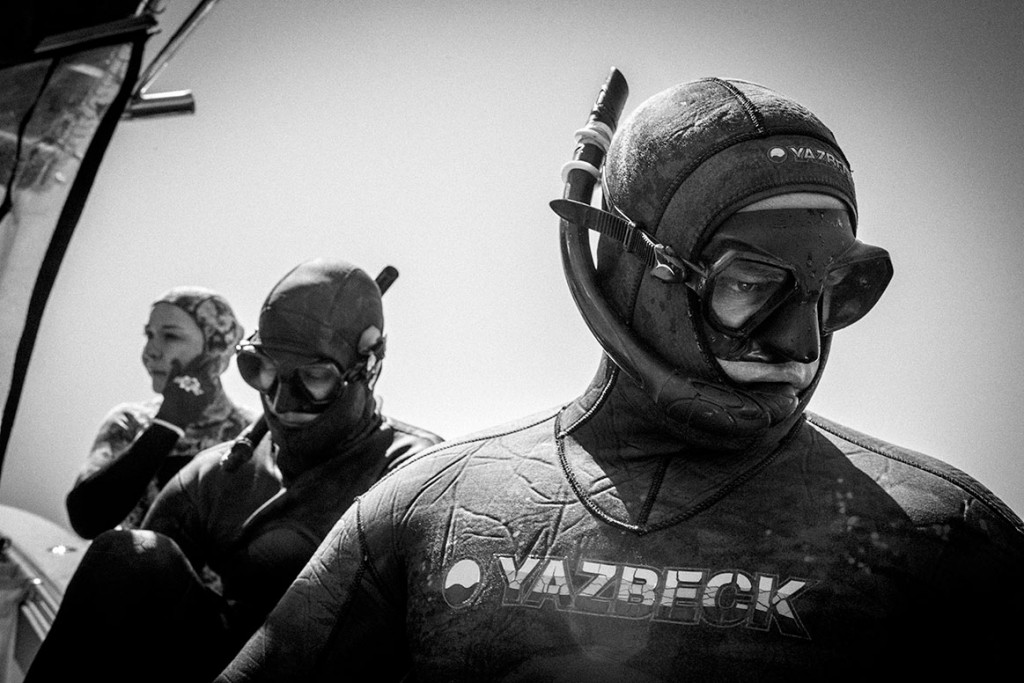 From left to right, Julie Augustine, Mike Pooler and Joe D’Agostino run through checklists and get their minds right before making a dive. Basic free diving equipment consists of a mask, snorkel, wet suit, weight belt and fins. Pooler is the owner of Benthic Ocean Sports in Destin.

On Day 2, the class takes place in open water, usually from a boat or at Vortex Springs in the event of rough water.

“We weight ourselves to be neutral at 33 feet,” D’Agostino explained. “We kick hard with big fins until you get to 33 feet and then ease our kicks as we become negative and the weight belt begins to carry us to the bottom.”

D’Agostino has students from pre-teens to people in their 60s. His regular dive partners include retired orthopedic surgeon Dr. Fred Cardet, age 71.

For years, Cardet, who grew up in Miami, was a self-taught free diver. He started spearfishing at age 17. Over time, as he visited increasingly deeper waters, he thought about and then decided, in 2004, to take a certification class. His most memorable spearfishing triumphs have been a 131-pound amberjack, taken during a trip that left out of Destin in 2018, and a 150-pound yellowfin tuna, harvested near an oil rig off of Venice, Louisiana.

The big amberjack, Cardet said, “was probably the easiest fish I ever shot. It swam up to me and I was looking to my left, and when I looked to the right, he was right there. I didn’t have to move the gun or anything. I just pulled the trigger, the spear went through his head, and he rolled over.

Cardet’s favorite spearfishing target is the muscular, hard-fighting cobia, which he sometimes encounters just off the beach during its westerly spring migrations and at other times at depth.

He attributes his longevity as a free diver to good genes, staying in shape and refraining from risk-taking.

“There are old divers and bold divers, but there are no old, bold divers,” D’Agostino likes to say.

Cardet just once experienced a loss of motor control while free diving. He was surfacing when he encountered and shot an amberjack. As a result, he stayed down longer than he intended and developed a problem while fighting the fish. Never has he blacked out, but his brother once did.

“During our class, my brother went to 120 feet and came back only 110 before he blacked out,” Cardet explained. “The last 10 feet, the instructor had to assist him. One minute, he looked dead — all the color was gone from his face and his eyes were rolled back — and within a few seconds of taking a breath at the surface, he was wide awake again. That was incredible.”

D’Agostino said the most frequently occurring safety rules violations are diving alone and improper weighting. Some divers will load their belts up to the point where the weight carries them all the way down from the surface, eliminating the need for kicking.

“But if they black out and don’t make it all the way back to the surface, they sink and they may never be found,” D’Agostino said.

“When I took the class in 2004 with my wife and my brother, our instructors were two world-class free divers and their coach,” he said. “Years later, we took another class with Joe as a refresher, and he helped my wife far more than the world-class divers did. He is really a top-notch instructor.”

D’Agostino is looking forward to the Destin arrival on June 5 of Martin Stepanek of the Czech Republic, who set 13 world records as a free diver, founded Freediving Instructors International and developed the standardized curriculum it uses.

Stepanek will teach a Level I course at Benthic Ocean Sports and is also working to make D’Agostino a certified instructor trainer.

D’Agostino is set to become just one of a half-dozen such trainers in the United States.

Categories: On the Water

Hear the Hatchlings Losing Their Way