Hummingbirds take every advantage of the late summer smorgasbord of blooms and feeders in preparation for their eventual flight south.

For their size, hummingbirds have the largest appetites in the bird world. They feed every 10 or 15 minutes from dawn until dusk. In a day, they eat more than half their weight in food and drink eight times their weight in water.

Nectar is their energy-rich food of choice and is absorbed rapidly. One adult hummingbird may need nectar from hundreds of blossoms daily just to maintain its body weight.

The ruby-throated hummingbird is the most common one in Florida. This feathered jewel is about 3 inches long and weighs as little as a penny coin.

Hummingbirds must consume large amounts of high-energy food to acquire enough strength to support their hypersonic aerobatic activities. While adult hummingbirds feed primarily on the high carbohydrate solutions, the young are fed insects by their parents while still in the nest.

Feeders should be removed from home landscapes during Labor Day weekend to encourage the departure to Central and South America. Declining blooms combined with the absence of feeders will stimulate the instinct to move to warmer climes with ample nectar sources from which to choose.

Hummingbirds have been documented to overwinter in the Emerald Coast area, but the risks of not surviving are high. In addition to few nectar sources, a hard freeze will quickly prove fatal to the delicate birds.

Black-chinned and rufous hummingbirds are seen in our area during the autumn and early winter en route to their cool season latitudes. The rufous has the longest migration route of all North American hummingbirds, flying from Canada to Mexico.

Even though its bright green leaves with their distinctive heart shape may be attractive, this plant is in reality a hard to control pest species. 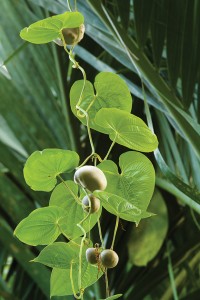 The stems and foliage of the air potato vines will soon be dying back as autumn approaches, revealing potato-like tubers.

Each time the vine drops a “potato,” another plant is likely to grow from it. This exotic plant has caused severe damage to the native environment and costs homeowners millions of dollars annually in attempts at eradication. Its twining herbaceous vines grow up to 60 feet in length. The vines are salt tolerant and flourish near the coast. Even air potatoes the size of a pea will start a new plant, but most of its tubers are much larger.

Homeowners can limit the spread of air potatoes by picking up every bulb hitting the ground before it sprouts. Once the bulbs are removed, the vine can be treated with a broad-leaf herbicide. Typically, at least one follow-up collection of bulbs will be necessary for success. 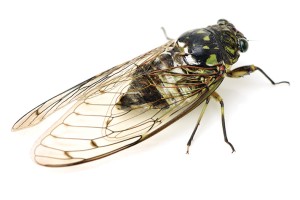 Anyone taking an early evening walk in North Florida during the late summer or early autumn has experienced the near-deafening calls of cicadas. Their mechanical buzzing originates from the protection of foliage in trees and bushes during the day or twilight hours. The 19 Florida cicada species fall into three groups based on overall size measured by the length of the forewings. They produce their nightly serenade with timbals, paired drum-like structures on the sides of the abdominal segments. In some northern states, cicadas are famous for their periodic appearance in colossal numbers, sometimes as many as 1.5 million per acre. These once every 13-to-17-year swarms do not occur in Florida, which has an insect-friendly environment. Both the adults and the nymphs feed on xylem sap from grasses and woody plants. The solution transports water and nutrients from the roots to the stems and leaves. The plants usually recover quickly from the damage left by the snacking cicadas.