A technical writer pivots to fantasy

For decades, Ron Larsen’s writings appeared without a byline.

Following his graduation from North Dakota State University in Fargo with a degree in electrical engineering, Larsen worked as a writer of manuals for the bygone Control Data Corporation in Minneapolis and two other computer companies in Minnesota’s Twin Cities, businesses that have also since passed from view.

Laid off in Minnesota, he caught on in Orlando with Westinghouse, which was launching a computer division, and moved from technical writing to producing marketing copy: brochures, promotional copy, presentations, newsletters.

Before entering upon semi-retirement, he worked as a marketer for a German manufacturer of precision gearboxes.

“They are used in the automation industry for all sorts of production machinery related to food packaging, metal-cutting and metal-forming machinery, stuff like that,” Larsen said. “You put a motor and control on a machine and then use a gearbox to vary the torque and speed.”

Who could blame Larsen for dramatically departing from such sophisticated hackery upon trading gearboxes for the extraordinary sandbox that is South Walton County? Today, he is a writer of fantasy fiction.

He crafts stories about quests and conquests, but no bodice rippers, not for Larsen.

“I enjoy dragons, elves and sprites,” he said, “and I have written a couple of ghost stories.”

In all of that, he was influenced by his elder son, who was in high school when he introduced his dad to Dungeons & Dragons, then a tabletop game.

In one of Larsen’s short stories, Dragon-Fired Brewing, a wizened, white-haired Merlin stops by a brewing supplies store attended to by one Jacob Smerling.

Smerling responds to an unusual request from the wizard.

“We don’t get much call for dragon-fired kettles,
but I’m sure we can modify our No. 14 copper kettle to meet your requirements. We’ll eliminate the firebox, but we’ll need to reinforce the bottom of the water jacket to accommodate two concentrated fire sources. Concentrating fire in one area over a long period of time could weaken the material and cause leakage,
and that would be bad, don’t you agree?”

“Also, we can build a sturdy frame to raise your kettle so your dragons can easily get under it to heat it. You do want to raise it so that the beasts will be comfortable while working, right?”

Here, then, is evidence of a marriage in Larsen’s writing whereby his fondness for the fantastical is infused with his familiarity with the functional.

It makes for a delightful wort.

Larsen lives in Santa Rosa Beach with his daughter and her husband and the couple’s two children. He has sons who live in California and Ohio. While his writings bear no connection to the place, Larsen, unmistakably, grew up among waves of grain. His voice is North Dakotan.

His paternal grandparents, who emigrated from Denmark, homesteaded land in northwestern North Dakota just south of the Canadian border. His father owned farms and eventually moved his family to near Minot, and Larsen, who attended country schools until the 8th grade, became a townie.

Still, one gets the feeling, even today, that Larsen could hop aboard a John Deere combine and not be out of place.

In recent years, he has served as the moderator of the South Walton Writer’s Group whose members, unless disrupted by storms or viruses, meet twice monthly, once at the Walton County Coastal Branch Library to critique one another’s work and once in a purely social gathering at Music & Coffee in Santa Rosa Beach.

While the group has 25 or so members, a given meeting may attract six. Participants may submit anything they have written, Larsen said, for review and comment by fellow group members. Submittals have included short stories, chapters from novels in progress and magazine articles.

“We talk about elements that could be improved,” Larsen said. “It’s a closely knit group, and it doesn’t take too long.”

And, no feelings get hurt. Larsen sees to it that the proceedings are North Dakota nice. 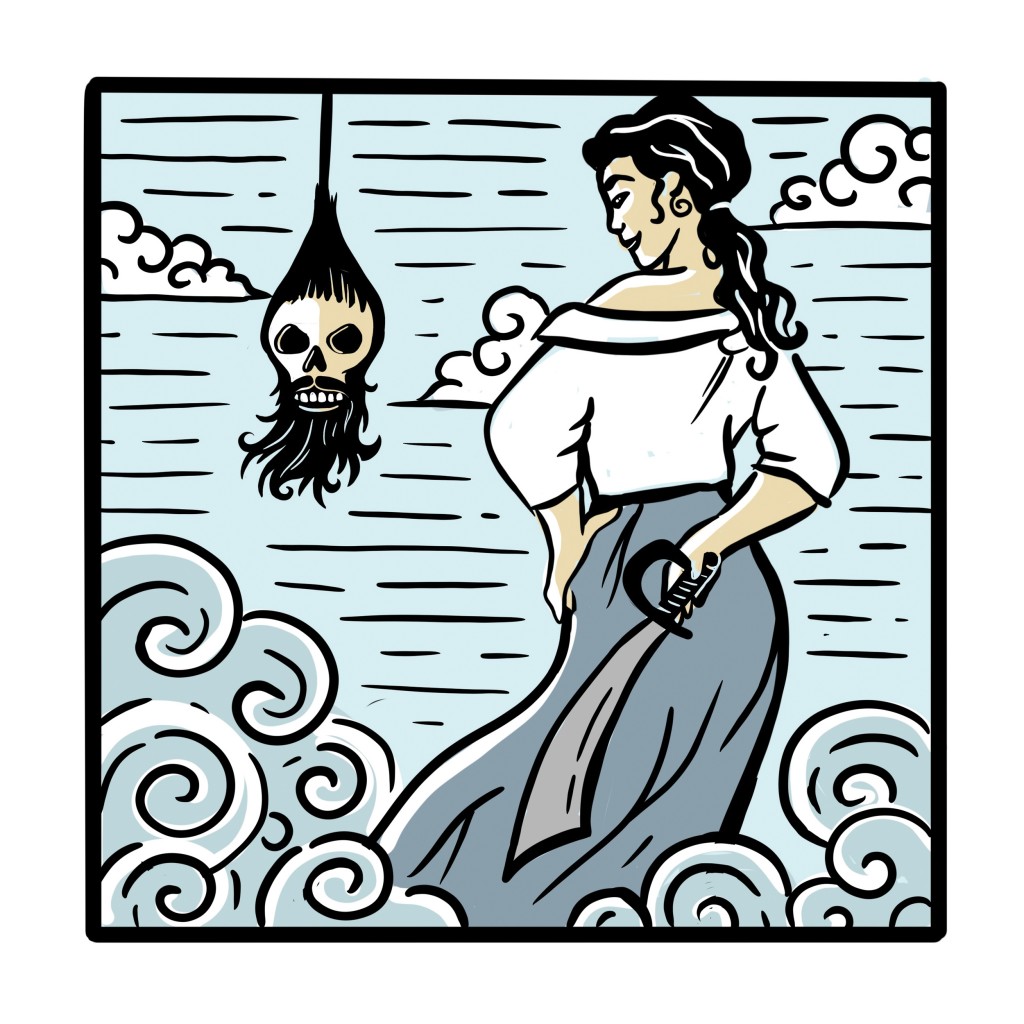 The Pirate’s Head: A ghost story by Ronald M. Larsen

They’ve got old Blackbeard’s head on display on a gibbet down at the Hampton River dock,” Adolf Harting remarked, looking up from his newsletter at the dinner table.

“That’s nice, dear,” his wife replied absently as she cleared the remnants of dinner and stacked the dishes in the sink.

“Paper says Gov. Spotswood sent two sloops out looking for pirates. Found them too,” Adolf continued. “Had a battle with Blackbeard and his crew. Killed Blackbeard, cut off his head and threw the body overboard. Paper says that some of the crew told stories that the pirate’s body swam around the sloop seven times before it sank. Might be some sort of curse there.

“They brought the head back, tied to the bowsprit of the HMS Ranger. Brought back what was left of his crew, too. Going to try them for piracy over at Williamsburg, and they’ll probably all hang.”

“Master Maynard needed it. Had to prove to the governor that he’d killed Blackbeard so’s he could claim the reward.”

“I want to go see it!” Emily exclaimed.

“You will not!” her mother scolded. “That dock is no place for a proper young lady. And proper young ladies don’t go out looking at dead men’s heads. Besides, it’s got to be rotting and stinky and nasty by now.”

Emily wrinkled her nose and made a face. “But I’m not a proper young lady,” she protested.

“You will be,” her mother replied. “Any daughter of mine will be a proper young lady. You will stop being a tomboy and act ladylike, like your sister.”

“Beth is stuffy and boring. And so are her friends. I don’t want to be like them.”

“Enough of that!” her mother commanded. “You will stay away from that dock! You hear me?”

“Yes, momma.” Her tone meant: “I hear you, but I’ll be darned if I’m going to obey you.” She defiantly skipped outside to play.

“I don’t know what I’m going to do with that child,” her mother sighed. “She gets the strangest ideas.”

The next day after dame school, Emily made a detour on her way home, down to the dock. A gibbet was mounted about halfway down, the pirate’s head hung facing out to sea.

“A warning, that is,” she heard a sailor say, nodding toward the severed head as he walked by. “Lets you know that piracy don’t pay.”

“You’re wrong there, Louie,” his companion offered. “It pays real well. Just not for very long.”

The sailors laughed and walked on. Emily walked past the display, then turned around to see the pirate’s face. It was a gruesome sight. Most of the flesh had rotted away, exposing eye sockets and patches of bone. Braids of long black tangled hair and beard remained, however.

As Emily stood there looking, the face of the pirate filled out as it had been in life. He winked one eye at her, and mouthed, “Ahoy thar, lass. How be ye?”

Emily felt a chill, and then a strange sensation came over her. She felt herself grow older and taller and felt her breasts filling out. She sensed, rather than saw, her petticoats and blue dress replaced by loose-fitting maroon pantaloons and a white doublet covered by an unbuttoned leather jerkin. She carried a pistol and a cutlass in her red sash. A floppy tricorn hat with a single yellow feather was cocked to one side of her head.

Emily’s reverie was interrupted by a merchant passing by. “Hallo there, missy, what are you doing here? This is no place for a young lady.”

“What’s your name then?”

“I’m called Anne Bonny,” she replied in a husky voice, surprised to hear the words come out of her mouth.

“I’ve heard that name somewhere before,” the merchant said slowly, attempting to remember.

“That there’s a lady pirate,” his companion said. “Sails with Calico Jack Rackham down Bahamas way.”

The merchant brightened and chuckled. “You’re not a lady pirate.”

“Not yet,” Emily replied, sliding her hand along the hilt of the cutlass that nobody could see. “No, not quite yet.”