His photography captures the energy of water

The light must be right.

If it’s not, photographic artist Jonah Allen won’t bother taking his camera out of the bag.

And light is just the beginning. Other elements must align if Allen is to arrive at the kind of image that he might wait months to capture: tide, wind, wave height, wave interval and patterns in sand made by water.

To all of that, add tannic outflow from a dune lake entering a crystalline Gulf, and the shot just makes Where Waters Meet, a book that Allen is compiling.

Allen has carved out a tightly defined niche for himself in South Walton County, selling large-format prints of water in motion.

I’ll put it to you this way: He photographs energy.

“I am always photographing things that are very, very ephemeral,” Allen said. “They exist for a very little bit of time, and then they are gone.”

Allen grew up in Atlanta, landlocked hours away from saltwater. But he discovered an affinity for surfing as a boy vacationing with his family in Seaside and was, as some say, “ruint.” Never again would the city that once adopted the motto, “People Seem to Like It Here,” feel like home.

He attended the University of Georgia in Athens where he studied marketing, art and music business and worked for Red & Black, the campus newspaper, as a photographer focused on concerts.

Still, big water pulled on him, and after college, he traveled the world surfing for a year, making stops in Hawaii, Chile, Peru and Bali. Off Kauai, he was overwhelmed by a 20-foot wave that had looked manageable when he first spotted the break a half-mile off. In South America, he encountered subsistence fishermen and dramatic evidence of sea-level rise. In Indonesia, he gained an appreciation for the ancient rice-paddy irrigation system called “subak.” 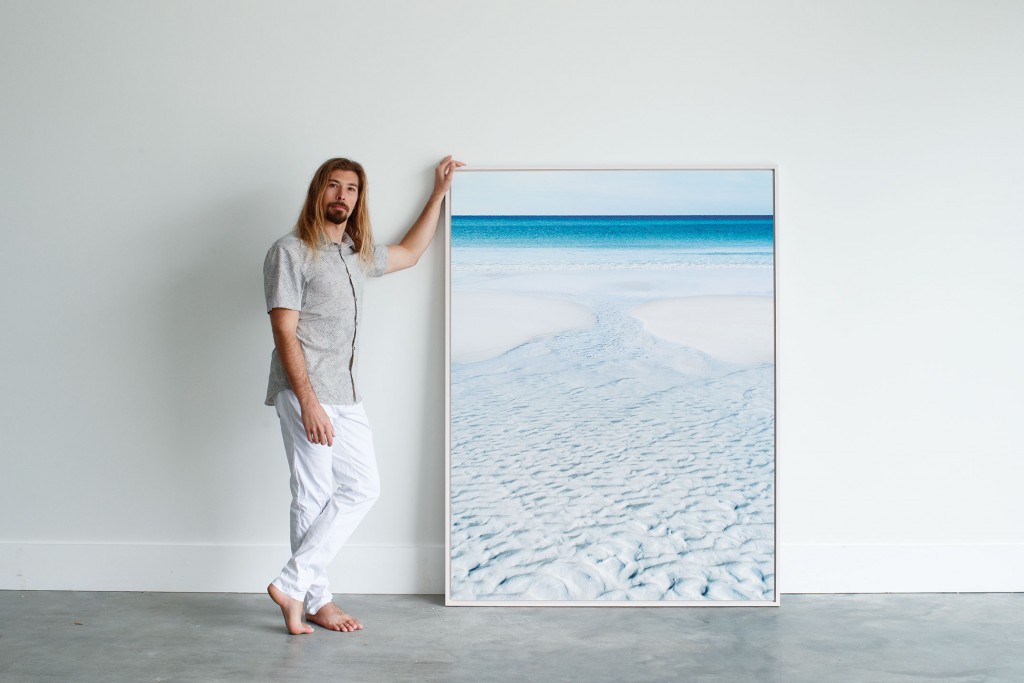 Allen displays a photo of a beach scene that presents a study in blues and whites. His photos, including one titled Peak No. 53. Photo by Sean Murphy

All along the way, the chance that he would ever settle down away from water evaporated.

In December 2017, he moved to South Walton County from Georgia, resolved to make his living as a photographer.

“There are three ways you can learn,” Allen said. “By failing, from books and from mentors. I have a friend and mentor, David Darby, who owns a recording studio. He told me never have a fallback plan because if you do, you will fall back.”

Allen, accepting that advice, has proceeded to make waves without a Plan B. At this writing, he is installing track lighting in a space — 416 S. County Highway 393, Building 9, Unit 3, in Santa Rosa Beach — that he planned to open as a studio/gallery in February. He expected that Where Waters Meet would be published in March. He was making plans for a documentary film showing.

And, his collection of keeper images, most of them from South Walton and elsewhere in the Southeast, is steadily growing.

Allen uses the “best equipment I can afford,” but even the best of equipment cannot bring about the perfect moment. He often prefers the perspective gained by shooting water from the air and, to do so, has employed drones, ladders and cranes and gone for helicopter rides. But, too, he takes photos from the shore and while in the water.

Most of his shots are taken in the first two hours after dawn. Then, the light is right, and he can hope to photograph a stretch of sand before it is marred by the first footprints of the day. To preserve such opportunities, he has cordoned off the beach in spots with ropes and pleaded with early morning walkers not to intrude upon his shot.

Allen estimates that 90 percent of the photos in his portfolio — see jonahallen.com — were taken within 15 miles of his home near Eastern Lake and within two minutes of the beach. He tends to roll out of bed at the last possible moment and then sprint or bicycle to the sand in time for first light.

“I have been working on photographing all the coastal dune lakes in Walton County,” Allen said. “They can fill up with rainwater and burst, and you have an outfall that connects them to the Gulf. For the past two years, I have been photographing that phenomenon from the air. Where the freshwater and saltwater meet, those are my favorite places.

“The outfalls are very dynamic. They change every hour. It’s really cool to watch.”

More of that ephemeral stuff.

Allen recognized early on that he doesn’t like to take pictures for others.

In that, he has a purpose that goes beyond making a living.

“I can’t cause people to care about the water or the environment unless they experience it firsthand,” Allen said. “But if my images inspire people to go out in the water and feel it and develop a respect for it, then they might just care about the future of it.

“We live in a very special place in Northwest Florida,” he added, and said he is concerned about the pace and planned scale of development in the region. “If I could go back and experience this place as it was 100 years ago, that’s what I’d do.”

And he’d take his camera.