Frenetic insect activity ensues during autumn around the home, especially near blooms. These creatures are desperate to prepare for the cooler months ahead.

Social insects such as European honeybees are working hard to collect nectar and pollen from autumn wildflowers. Goldenrods, partridge peas and many others are humming as the bees build up their stores.

Honeybees have another tactic for surviving the adversity of winter. The worker bees, which are all females, eject the drones, which are all males, from the hive. The drones scatter and are left to their fate. They cannot forage to feed themselves, so these bees without stingers starve or fall victim to hungry predators.

Most wasp colonies die away in the autumn, leaving only the young, mated queens. After feeding heavily during the fall, the queen leaves the nest to discover further resources. Satiated, she finds a suitable area to hibernate for the winter. After emerging from hibernation in spring, the young queen searches for a suitable nesting site.

Many butterflies and moths drink the nectar of late-blooming plants during the shortening days of autumn. Some, like the monarchs, are preparing for arduous migrations to south-of-the-border locations.

Zebra longwings feast on the pollen of late bloomers to produce a sour taste to repulse predators. Other butterflies, such as the buckeye, remain and have enough surviving members to replenish the population in the spring.

Even the lazy and long maligned and fabled grasshopper’s cousin, the katydid, is enjoying the remaining warm days by snacking on available blooms. This member of the Tettigoniidae family is an indiscriminate eater, much like the grasshopper, but late-season flowers are delectable items on the menu.

Unlike Aesop’s grasshopper, they are not wasting a minute preparing for winter. 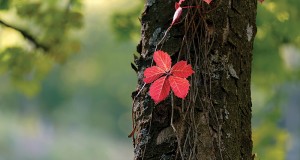 The Emerald Coast region is not known for brilliant foliage color during autumn. Still, there are two native vines that produce vibrant reds as the days cool and become shorter.

The leaves of Virginia creeper and poison ivy turn from green to red during the fall. The inflamed tones brighten the season and serve as an easily seen warning for anyone who might blunder into itch-inducing ivy.

During this period, which produces ruby shades on these vines, poison ivy will still cause the skin to itch, for which it is notorious. The irritating oil on its leaf’s surface will remain for about a year after it falls from the vine in late autumn.

The red foliage is a warning to stop and avoid contact.

Onions are a fall crop that’s easy to plant and doesn’t require a lot of space. Seedlings can be planted in the small spaces between shrubs in a home landscape or as a border plant, which will remain green during the winter.

Locally, onions can be grown for both the greens and the bulb. Scallions or green onions will be ready for harvest in 30 to 45 days, but bulb onions will take until late April or early May to mature. For either crop, the bulbs should be planted just below the soil’s surface with a south-facing orientation to ensure enough sun exposure. Flowerbeds with rich, organic soil are an ideal site for planting. Mulching around the bulbs will also help maintain the soil’s moisture and adds a few nutrients to promote growth.