He didn’t know what to wear.

Once previously, Michael McCarty had met one of his heroes, Andy Warhol, at a picnic hosted by Capricorn Records in Macon, Georgia, and attended by Jimmy Carter, who was campaigning for president.

McCarty, of Santa Rosa Beach, wore a T-shirt that he had been commissioned to create for the campaign. It featured caricatures of Carter and George Washington Carver seated on a giant peanut and was designed to get out the black vote.

“Where could I get a shirt like that?” Warhol, who was covering long-shot Carter for his own Interview magazine, wanted to know. A conversation developed, and Warhol floated the idea of publishing a story about McCarty and samples of his work in Interview. 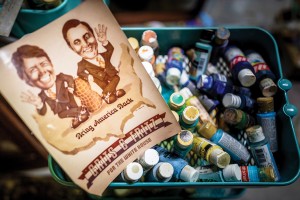 Years later, Warhol, still mindful of the T-shirt artist, was in Atlanta, where McCarty, who grew up in Dothan, Alabama, had found work with an international graphics firm after graduating from Auburn University in 1970 with a degree in visual design. There, he got his start specializing in magazine ads and album covers for the music industry.

McCarty, nervous at the prospect of meeting with Warhol, had, on the advice of his wife Sherri, visited Lenox Square to “get something new.”

Dressed in a white button-down; red, Dickies brand painter’s pants; and white tennis shoes, McCarty delivered the code to the door, and was escorted to a back room. There was Warhol, who wore …

“He asked me to turn around so he could see the label on the back of my pants, and he said, ‘Dickies, just like mine,’ ” McCarty relived the coincidence. Warhol then commanded, “We cannot walk out of here together.”

He got tangled up in deadlines and never did.

“I could kick myself,” said McCarty, a man of few regrets.

Imagine a Dothan product so consumed by his work that he couldn’t find the time to send transparencies (at that time) to Andy Warhol.

At 73, McCarty is still ate up with art. In May, he was the featured artist at the ArtsQuest Fine Arts Festival, produced by the Cultural Arts Alliance of Walton County. In March, the Monet Monet events venue on 30A hosted a show of his work.

As rock ’n’ roll gave way to pop, rap and hip-hop, and illustrated album covers gave way to photo covers, McCarty transitioned to fine art. When their daughter Kelly headed for college in New Orleans, Michael and Sherri traded Buckhead for the Emerald Coast that had colored McCarty’s youth.

His grandfather had owned a Gulf-front cottage at Miramar Beach. McCarty’s father taught him how to find trout, redfish and sheepshead in West Bay. As a teen, he hung out at The Hangout dance hall on Panama City Beach.

In 2009, McCarty was the Beaches of South Walton artist of the year, and the county’s tourist development council commissioned him to produce a painting representative of the area.

In creating it, McCarty initially was inspired to paint a group of women, the Polka Dot Pool Pussycats who, led by South Walton artist Didon Comer, meet regularly for water aerobics sessions. But he thought better of the idea, painting over all of the ladies except Comer, whose head he replaced with that of a cat.

The finished product brings to mind old-timey, illustrated Florida maps with oranges in Orlando, flamingos in the Keys and a military jet in the Panhandle. In Twenty-Six Miles, a leaping blue marlin shares the sky with terns and dragonflies. A sea turtle nears the water’s surface. A great blue heron dominates the foreground. Easily overlooked is the familiar stand of pines that separates Western Lake from the Gulf.

“I moved the paint around, and it started flowing, and I got into like a trance-like state, and then the painting started happening to me,” McCarty said.

At this writing, a painting of a freshwater pond dotted with lily pads is happening to McCarty.

Will it be the one?

“Striving for the perfect painting is what keeps the fire burning,” McCarty said. “But deep down inside, you know you’ll never get there.”

Any more than he can bring back Andy Warhol.