A Fish For the Ages

Sturgeon survived the dinosaurs and live in waterways near you 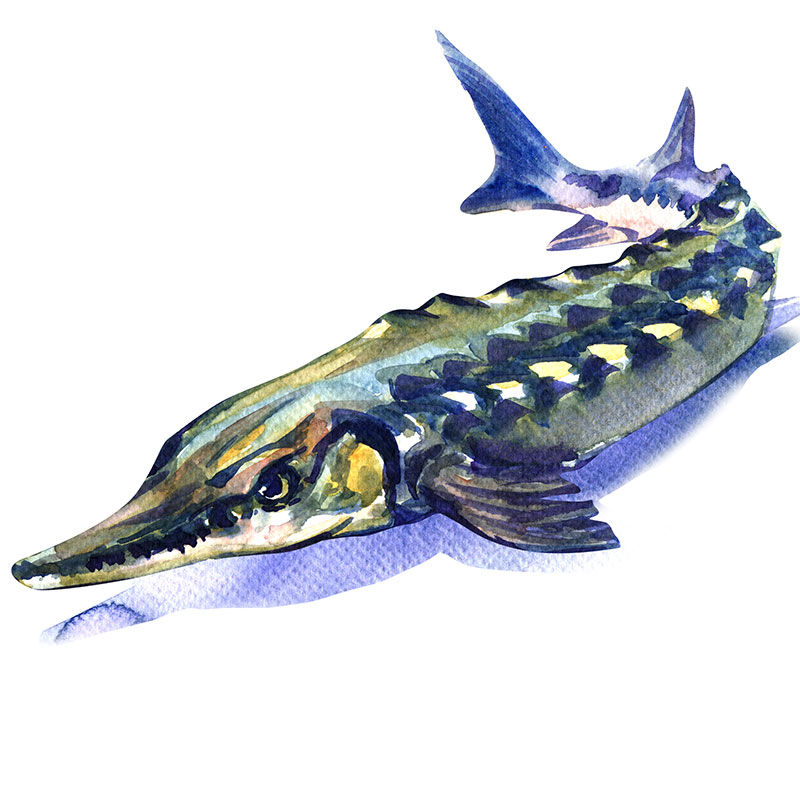 It’s a tough-looking, ugly fish from the dawn of time. Diamond-shaped armor plating runs the length of its body. Fleshy barbels, used to detect food, dangle in front of its siphon-like mouth. Its tail sweeps back like the blade of a scimitar. It can grow up to nine feet in length and weigh upwards of 200 pounds. It’s adaptable to cold and warm water and moves easily between fresh and salt water. In modern times, it exists as 25 species. The Gulf sturgeon is the southernmost, and it’s found a happy home in the rivers of the Emerald Coast.

According to Frank Parauka, retired U.S. Fish and Wildlife Service biologist who studied sturgeon for many years, there are anywhere from several hundred to 4,000 Gulf sturgeon in our neck of the Panhandle. There are about 1,200 in the Apalachicola River, 3,300 in the Choctawhatchee River, between 1,100 and 1,200 in the Yellow River, and between 400 and 500 in the Blackwater and Escambia rivers. There’s also a small population of
about 100 in the Ochlockonee River, Parauka said. These numbers pale in comparison to the 10,000 or more in the Suwannee River.

“We have a healthy population in the Choctawhatchee, but not like the Suwannee,” said Winston Chester, host of the fish and game television show, “Panhandle Outdoors.”

Gulf sturgeon are “anadromous,” that is, they alternate between fresh and saltwater environments. Adults migrate into freshwater rivers in the spring to spawn and then move into the estuaries and bays of the Gulf of Mexico to forage in the fall and winter. They are bottom feeders and graze for mollusks, crustaceans and other bite-sized aquatic critters.

The astounding thing about this bottom-dweller is its penchant for bursting from the surface of rivers and landing with a percussive crash that can be heard far and wide. Exactly why the fish does this remains a mystery.

“Scientists don’t know why, but it’s spectacular. It’s similar to what a tarpon does,” Chester said. “That’s how people get injured. They’re motoring along and (the fish) hit people in the chest.”

“It happens in all of them, any time of the year — usually in the spring — and most of that jumping is in the Suwannee River because you’ve got 10,000 fish there,” Parauka said. “That’s where most of the incidents occur, especially when your rivers are in a drought situation and the fish are concentrated. That’s when you’ll see it more often, but you’ll see incidents over here where a boater runs into a fish that’s jumping. There’s been a number of incidents on the Choctawhatchee, Yellow and Escambia rivers.”

Unfortunately, direct strikes have proven fatal in the past. In the summer of 2015, a child was killed when a sturgeon jumped into her boat running on the Suwannee River. Her mother and brother were also hurt. Parauka said he could recall another incident on the same river that claimed the life of a boater who fell overboard while trying to avoid a jumping sturgeon. He said the boater drowned for lack of a life preserver. So, the danger potential is very real. In 2007, a leaping sturgeon seriously injured a St. Petersburg woman while she was riding a personal watercraft on the Suwannee. 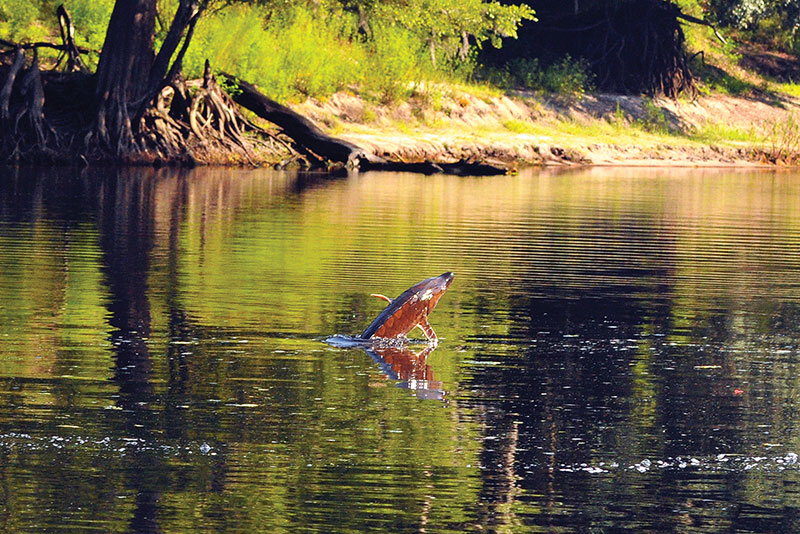 What’s the best course of action for avoiding a collision? We recommend boaters reduce their speed to reduce the risk of impact and to give people more time to react if they do encounter a jumping sturgeon. The FWC also recommends that all boaters wear their life jackets.

“There are warning signs telling the boaters to beware because it’s so unpredictable, like a deer in the road,” Parauka said.

And just like driving along a deer-infested stretch of country road, the best thing a boater can do is go slow. You can increase your reaction time, and if a strike does occur, it’s better to hit a 100-pound armored fish at 10 miles per hour than 45. Authorities also advise boaters to wear life jackets at all times, stay off the bow when moving through waters where sturgeons are known to jump, and also be alert and aware of your surroundings. The fish seem to prefer the deep parts of a river so boaters ought to keep close to the shore.

The Gulf sturgeon is federally listed as “threatened,” and it’s illegal to intentionally harvest them. The species has been butting heads with humans for many years. In the early 1900s, the population numbers were depleted by commercial fishing, and river dams blocked them from spawning sites. Other culprits such as pollution and loss of habitat haven’t been very good for the fish, either. But the life cycle of the species doesn’t do them any favors either, Parauka said. It has to do with their longevity. They can live up to 30 or 40 years, and females don’t mature until they are 15 years old, generally speaking.

“You’re looking at a fish that matures late, and she will lay eggs at around 15 years and may not lay again for three or more years,” he said. “So when you say the population is increasing, you see that it takes a long time to see any noticeable increase because you are looking at fish that spawn only periodically. It doesn’t help itself, let’s put it that way.”

Even though it’s illegal to intentionally harvest them, they do get hooked by accident once in a while. This can happen mostly in the winter, when the fish are out in the Gulf foraging and feeding.

“Well, I just heard of an incident over in Pensacola Bay where a person was trolling with a lure and happened to snag one because they happened to be in the bays and inland waters this time of year,” Parauka said. “Fish have been snagged by trotlines, and now we have had incidents where smaller fish have been caught by hook and line. These fish, during the first year of life, are actively feeding in rivers, and we’ve had people catch them with bait — incidental catches.”

But back before there was a law against it, people used to freely fish for sturgeon in an almost ritualistic method, humorously coined, the “Chattahoochee Sleigh Ride.” Years ago, before the Jim Woodruff dam was built across the Apalachicola River, sturgeon would migrate into the Flint and Chattahoochee river systems. But when the dam was built, it blocked that migration and the fish congregated in one spot.

“The fish would gather below the dam, and folks would go out there and snag them,” Parauka explained. “This was a process where a person would get in an inner tube, snag a fish, and the fish would pull them around until (they tired) and they were able to carry them out to the shore. This was called the Chattahoochee Sleigh Ride in the early 1960s.”

Parauka advises caution when dealing with a hooked sturgeon. He’s had to capture a few for tagging and research in his day. As the “sleigh ride” nickname suggests, they are very strong and he said they can certainly put up a tussle. Once in the boat or on shore, their very anatomy warrants care and attention.

“It’s an armor-plated fish, and with all the plating on them you have to watch out,” he said. “We’ll get them on the boat, and they will thrash and you can get injured, especially on a larger fish. But once we put them in the tank, they are docile. We tag them and don’t have a problem.”

So, what have we learned from studying these fish? A great deal that can help us protect them. For example, spawning areas and migration patterns have been well documented, as well as the specific places they congregate during the summer.

Tagging and other studies show us that sturgeon will come down from the Choctawhatchee River into Destin and swim east to Shell Island and Tyndall. Or, they’ll go west to Perdido and Orange Beach, Parauka said. They tend not to go too far or too deep into the Gulf, but prefer to stay within a few hundred yards to a mile offshore. Usually they’ll stay where the feeding is best and generally will come back to the same river to spawn.

“They have a really strong homing tendency and will come back just about every year,” he said.

“Certainly, this is a unique animal. We’ve caught them up to 200 pounds in the Apalachicola River, and nine feet in length. That’s a big fish. You don’t see a whole lot of fish that are over 100 pounds.”