What You Should Know About Oyster Culture

Irv Miller's new book flows from the boom in aquaculture

That’s the view of Chef Irv Miller, who has authored a cookbook, Gulf Coast Oysters (Spring House Press, 2018), which presents “classic and modern recipes of a Southern renaissance.”

Miller, shortly after the book’s release, conducted a meet and greet/book signing at the Hidden Lantern bookstore in Rosemary Beach.

I asked Miller to “describe the perfect oyster — and would it be wild or farmed?”

“You don’t know what a loaded question that is,” Miller replied, recoiling slightly and suggesting that my query was more stuffed with implications and traps and shades of meaning than Oysters Rockefeller are slathered in sauces and cream and a spinach mixture.

But he then proceeded to list oyster aquaculture operations all the way east to Cedar Key.

And, he did give a nod to every-one-is-different, barnacle-encrusted wild oysters, noting that they are especially good in post-spawn periods.

Miller notes the familiar advice about avoiding oyster consumption during months without an “r” in their name.

The adage appeared in a cookbook written by an Englishman in 1599 and there is evidence that Native Americans abided by the precaution even earlier than that.

It applies today to wild oysters as much as it ever did, owing to reproductive cycles.

“Oyster meat becomes creamy before spat, which happens as the water begins to warm, then very thin and translucent,” Walsh wrote in Sex, Death and Oysters.

“This silky, sweet-cream texture is different from the oyster’s texture the rest of the year. … As the water gets colder, more glycogen accumulates, and the oyster gets plumper and tastes sweeter.”

Farmed oysters, however, are triploid organisms, meaning that they have an extra set of chromosomes and are sterile.

They grow faster than wild diploids and their meat remains plump throughout the year. They are uniform in size and shape and tend to have an ideal “cup size,” Miller said, employing a term usually reserved for something else.

But even triploids can vary in quality owing to factors including the water they are pulled from, when in the course of their development they are harvested and how they are cared for following harvesting.

Miller has plenty of culinary cred. He is the executive chef at Jackson’s Steakhouse in Pensacola, a job he’s held for 20 years.

He worked at Bud & Alley’s in Seaside during that restaurant’s early years. He underwent formal training at the Culinary Institute of America.

“Ideally,” Miller said, “oysters will have just the right combination of sweetness and brininess.” And that, of course, is a matter of taste.

“We live in a catsup/hot sauce/horseradish culture, and that’s fine,” Miller said. “But I’m trying to move us beyond that and make people more adventuresome.”

When I suggested to Miller that he is an “oyster change agent,” he cottoned to that right off.

Miller includes a recipe for “Simple Fried Oysters,” but he ranges far from the basics to include “Oyster Stew with Gochujang & Coconut Cream” and “Oyster, Bacon & Carmelized Onion Tartelette” and “Chargrilled Oysters with Smoky Spanish Paprika Butter & Serrano Ham.” 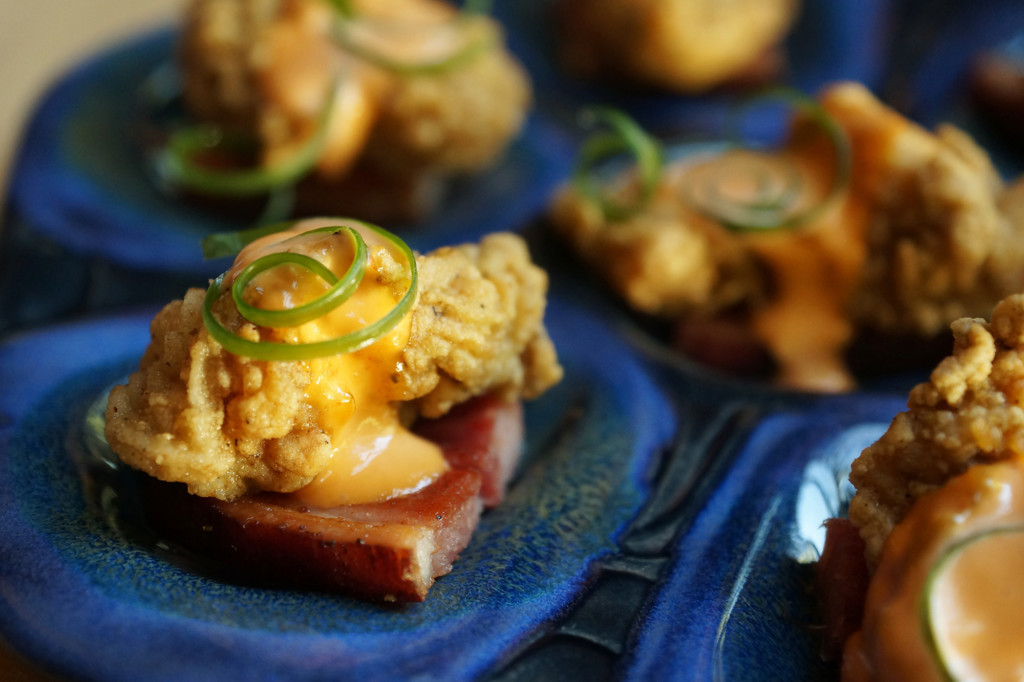 Oysters with bacon and aioli. Photo by Bill Strength Photography

The book is beautifully illustrated with photography by Bill Strength; his images are mighty strong.

Miller devotes two pages to “Shucking Oysters,” but the pages are mislabeled. Described instead is oyster surgery.

So much so that the preferred implement is not an oyster knife but a sharp-bladed one.

To wit, “Hold the shell open and slide the blade against the cap, gently dragging and jiggling the knife to scrape the shell from the abductor muscle.”

For Miller, the boom in oyster aquaculture is like the explosion of microbreweries.

“In fact, I prefer the term, ‘craft oyster’ to ‘boutique oyster,’ ” Miller said.

Miller profiles oyster farms, including that of the Pensacola Bay Oyster Company, headed by Don McMahon.

Writes Miller: “Don remembers when Escambia Bay was labeled ‘environmentally unsuitable’ to swim in or fish from only decades ago.

Today is a different story. The bay is once again healthy and full of life. On any given day, you may see schools of dolphin swimming the shorelines, mullet skimming the surface or fishermen pulling up redfish or speckled trout.”

“They were meaty, with a gentle brine up front and a delicate, sweet finish. For several months, I served them at Jackson’s Steakhouse and at numerous community events. They are among my top three picks and, in my opinion, one of the tastiest and most beautifully shelled, off-bottom-farmed oysters from all of the Gulf Coast’s growers.”

Given the proliferation of oyster farms, others may develop a particular fondness for oysters from Bon Secour or Panacea or Alligator Point.

Shuckers, take note. Your job may increasingly come to resemble that of a wine steward, thanks in part to the Oyster Change Agent.

Chef Irv Miller has been writing about the foods of the Gulf Coast for more than 30 years, and is recognized for having pioneered “New Florida Cooking” during the American Cuisine movement of the 1980s and ’90s.

In 1999, he, along with his partners, founded Pensacola’s Jackson’s Steakhouse where Miller serves as executive chef.

He is a six-time performing chef for the James Beard Foundation and is also noted for cooking alongside renowned chef Edna Lewis numerous times.

He appeared as a guest judge on the Bravo network’s Top Chef program.