Tim Jackson’s Storytellers Tour is back for its second season at Stinky’s Bait Shack on Aug. 17, 2022. The Tour has been the talk of the town beyond South Walton, receiving accolades from singer songwriters from all over the world.

On Aug. 18, Stinky’s Bait Shack is the setting for a fundraising event for Point Washington Medical Clinic (PWMC). Special ticket prices will include heavy hor d’oeuvres, a wine tasting and The Storyteller Event. 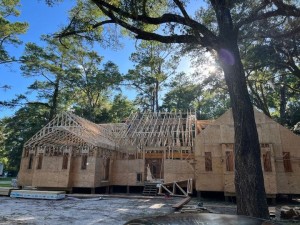 Under Construction: The Point Washington Medical Clinic. Funds will be raised by special ticket prices that include access to heavy hor d’oeuvres, a wine tasting and The Story Teller Event.

Funds raised will be used towards the Point Washington Medical Clinic planned stand alone facility in South Walton. Tickets for the fundraising event are $75 and can be purchased here. To learn about the PWMC building campaign and how your contribution can help this worthy endeavor, please click here.

In its second season, Tim Jackson’s Storytellers Tour is every Wednesday and Thursday night from 8 to 10 pm. Tim Jackson introduces audiences to talented storytellers, sharing their original live music. The listening room experience creates an intimate space allowing conversations with the artists much like sitting in your own living room among friends and family.

“What matters most to me is that the storyteller and the audience have a chance to genuinely connect,” says Jackson. He has tirelessly procured talent from all over the world to perform for his Storyteller Tour.

September 28th and 29th
To be announced

October 19th and 20th
Side Pony

October 26th and 27th
To be announced

November 2nd and 3rd
To be announced

November 9th and 10th
To be announced

November 23rd and 24th
To be announced

November 30th and December 1st
To be announced