Stories From The Heart: Ashton Welborn

Ashton Welborn’s mother knew something was wrong with her second-grader. When the always-hungry little girl stopped eating and became pale and weak, she took her to the pediatrician. Blood work determined it was mono, but her doctor wanted a second look at the labs.

“Your daughter has cancer,” she said — four words no parent ever wants to hear.

The doctor told Ashton’s mother to take her straight to the emergency room at Children’s of Alabama in Birmingham, but she didn’t hear any of that. In a daze, she drove her little girl to their hometown E.R. in Tuscaloosa.

Finally, on the road to the right hospital, 7-year-old Ashton, her mother and grandmother sang hymns and prayed. Once there, it was a blur of tests and blood work. Then a resident at Children’s of Alabama, Dr. Jeffrey Schwartz confirmed the diagnosis: Ashton had leukemia. She received her Mediport the following day and underwent two years of chemotherapy.

“My mom called him Doogie Howser,” Ashton recalls. “I didn’t know who that was, but I guess he looked like the guy from the TV show. He always wore crazy bowties. He was a very fun doctor.”

That was 2003. Now a nurse herself with the Studer Family Children’s Hospital at Ascension Sacred Heart in Pensacola, Ashton is going on 17 years of remission.

When she was first accepted into the nursing program, one of Ashton’s clinical rotations was in the Studer Family Children’s Hospital. She saw a picture of a familiar face in the elevator — Dr. Jeffrey Schwartz, now the Medical Director of Pediatric Oncology.

While her family was in town to help her recover from surgery following a basketball injury, they set up a surprise visit at Dr. Schwartz’s clinic. 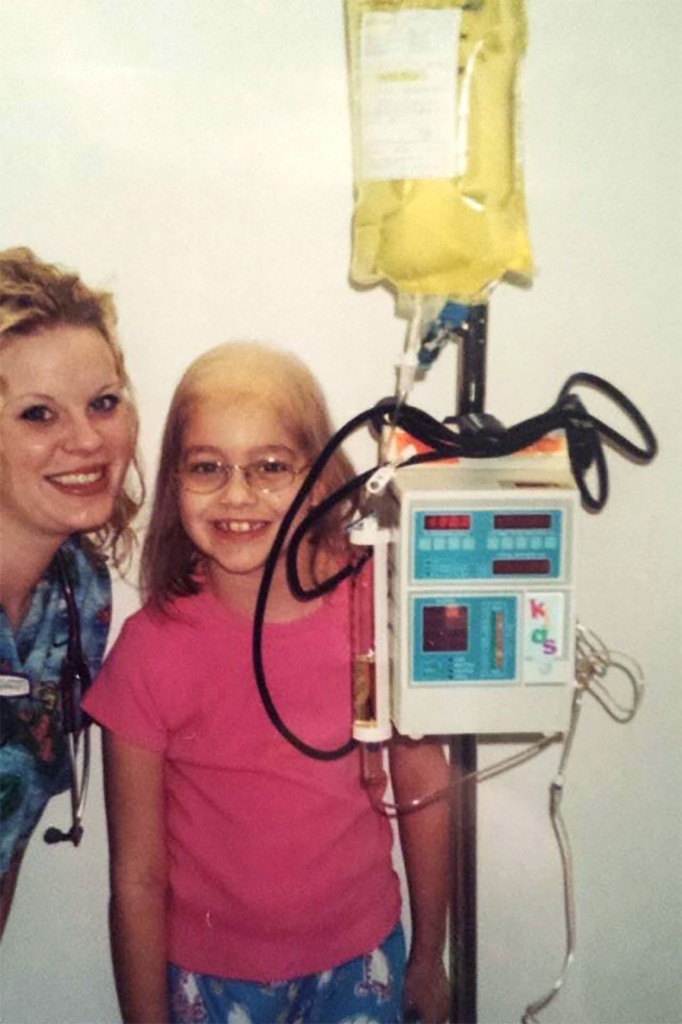 “He didn’t recognize me. I am much taller, and I have hair now,” Ashton says. “But he recognized my mom and grandmother.”

From that moment on, the young nurse updated the doctor who helped save her life at the end of every school year at Pensacola Christian College. When she graduated and began looking for a job, she never expected she’d have the chance to work alongside him.

In Dr. Schwartz’s office, there is a small table lined with tiles, each with a tiny handprint. One reads: “Ashton, 8 years old.” On that table now sits a copy of a book she wrote in middle school about her cancer story and the role he played in it.

Growing up in and out of the hospital, Ashton was always intrigued by the medical field. Many of the friends she met in chemotherapy aren’t here anymore or continue to fight their battles. When Ashton wonders why her life was spared, she believes she was called to help others going through the same thing.

“Working as a nurse, I’m able to share my story,” she says. “The parents can say, ‘She beat something so big … my child can do this.’ ”

It also encourages the kids, even though they might not fully grasp what’s happening in the moment. Sometimes people say they understand, even when they haven’t been through it themselves.

But Ashton has. She remembers her own nurses — and of course Dr. Schwartz — who made such an impact on her life.

Here’s what she would say to a child battling cancer:

“Take it one day at a time. Do everything you can to stay healthy. It’s hard to see the see the light at the end of the tunnel, but eventually it does come. Just keep faith. Pray. That’s all we did. Know that God will comfort you. Family and friends help a lot.”

Maybe a family in the hospital can’t see the light at the end of their journey with childhood cancer, but they can see a bright young nurse at the end of hers.

“Just to help those patients and families going through the same thing I went through will hopefully give them hope for that day in the future,” she shares. “Even if it just brings a light for the second, it’s worth everything I’ve been through.”