Although his time here was too brief, Jabyn Livingston changed the world — not only for his family but also for the thousands of people touched by his story.

For the first year of his life, the little boy met all his milestones. But by 16 months, his parents, Brad and Ashley, began to notice some delays.  Jabyn started falling a lot, he wasn’t seeing well and he would often stare blankly.

The family met with a neurologist who said the blank stares were caused by seizures, and was certain he had suffered an injury at birth. A second specialist confirmed the findings, but assured them Jabyn would be fine with continued rehab.

His parents weren’t convinced. When they met Sacred Heart’s Dr. Sara Anne Winchester — who they consider “a gift from God” — the family found answers.

Having researched it during her residency at Duke University, Dr. Winchester tested Jabyn for Batten Disease, a rare terminal neurological disorder. (So rare, the Livingstons say, a dozen other neurologists didn’t even know what it was.)

When she called after the test, the doctor confirmed their deepest fear. Jabyn was only 2½ years old. The Livingstons weren’t ready to give up.

“From that point forward, with a heart full of hope, and believing deeply that God can do anything, we were really just trying to do everything we could,” Brad says.

With Dr. Winchester by their side, the Livingstons looked into tests and trials, but none were specific to Jabyn’s disease. Still, they never gave up hope, spending much of the time they had left with Jabyn at the Studer Family Children’s Hospital at Sacred Heart — up to 21 days at a time, including many holidays.

Jabyn’s mobility was very limited, and he was prone to seizures. As a result, he wore a heart and oxygen monitor at all times. Sometimes, the seizures would last an entire minute. He would stop breathing, and his body would cease to function.

“We took it one day at a time, because we never knew what the day would bring,” says Jabyn’s grandpa, Dan. “You did whatever you could to live as happily and peacefully as possible, and just loved on him as much as you could.”

Through it all, Jabyn never stopped smiling. 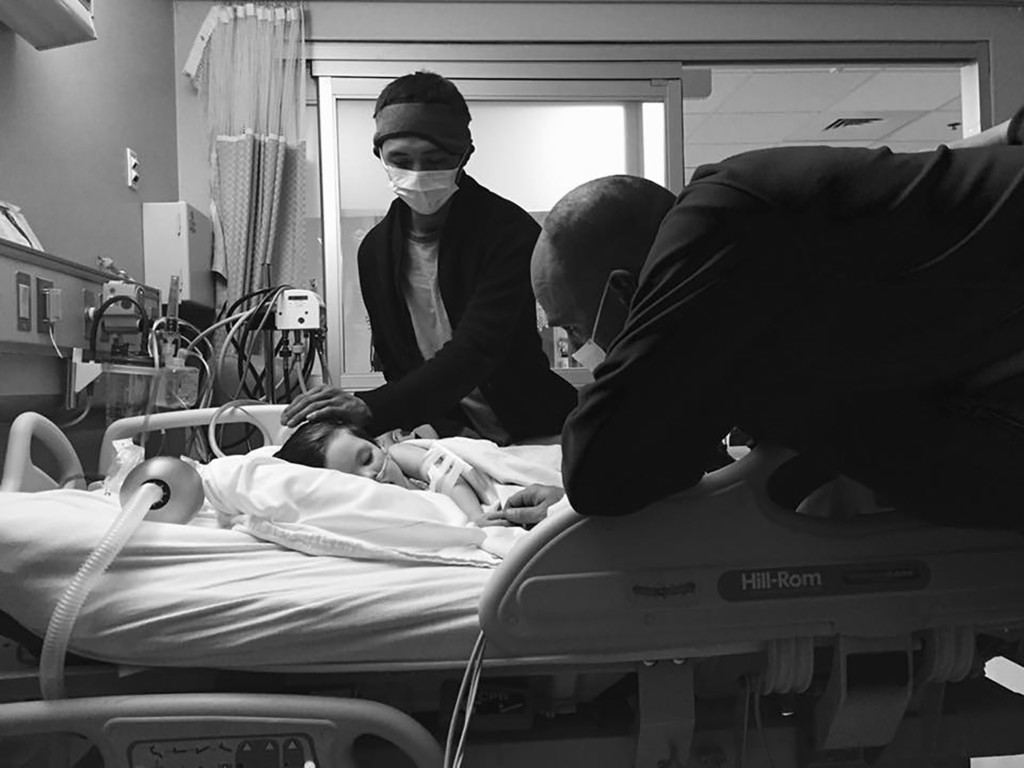 “You could tell he was just fighting and being tough for everyone,” his grandma, Cathy, adds. “He was stuck with all of us loving and kissing on him.”
There was a lot of medication. There were cell phone reminders to give him the five syringes needed to prevent his seizures. Few people could stay with him, other than his parents and grandparents, and an amazing babysitter, also named Ashley.

Jabyn’s grandfather stepped aside at Transformation Church to let Brad become Lead Pastor. This was good for both men — Brad needed a distraction, and Dan’s heart was always with his only grandson.

“The only way I can explain it to people is when you think you’ve left the oven on, that feeling of needing to go home because something is wrong,” Brad shares. “It’s like living like that for years, except it’s not your oven … it’s your son.”

Time at home was treasured. Grandpa, an avid bow hunter, would take Jabyn on special “hunts,” holding him in his lap while they watched hunting videos. Jabyn couldn’t see, but he could hear. His grandfather would tell him when the deer was coming and when it was time to pull back his bow.

At a hunting camp in Kentucky, Dan has a two-man deer stand called “Jabyn’s Stand,” with one seat reserved for his beloved grandson. The day before the funeral, when he had a few hours alone with Jabyn, he told him to come to him in his dreams to let him know he was OK.

“The very next night, I had a dream where kids were throwing balls in an open field, running and playing,” Dan says. “When he got close enough and I saw his face, he grabbed me around the leg and said, ‘Hey, PawPaw.’ And it hit me … he was finally getting to do what he was supposed to do.”

Everyone who met Jabyn says he had a way of letting you know he was all right. He knew when you were hurting, and he would brighten your day with his incredible smile.

Ashley says the hospital extended the family a lot of grace, knowing when to be there and when to give them space. “They were so professional and loving and caring,” she shares. “There were times they would give us an extra day, when I just knew in my heart we shouldn’t leave.”

As a pastor, Brad has been in a lot of hospital rooms. “There’s always a sense that the nurses are doing what they believe is right for their patients, but you don’t often see them paying as much attention to the parents. They really trusted her instincts.”

Jabyn passed away when he was just 5 years old. This precious little boy had received many generous gifts throughout his fight, and the Livingstons chose to donate all the unopened toys and books back to the Children’s Hospital in his honor.

At the funeral, Brad asked all those who helped him medically to stand up — and was overcome with emotion to see at least 30 nurses and doctors there.

The only word Jabyn ever said was “Dada,” and his Dada has a tattoo of the sound wave on his arm. “I’ve never seen someone impact so many people without saying a word,” Brad says. “Jabyn opened our eyes … his life has left a legacy.”

The experience of caring for a child with special needs led the family to open what they call “The Haven” at their church, with rooms for autistic children, kids with sensory issues, focus rooms and more. Because of Jabyn, more havens have opened up around the country — and even around the world.