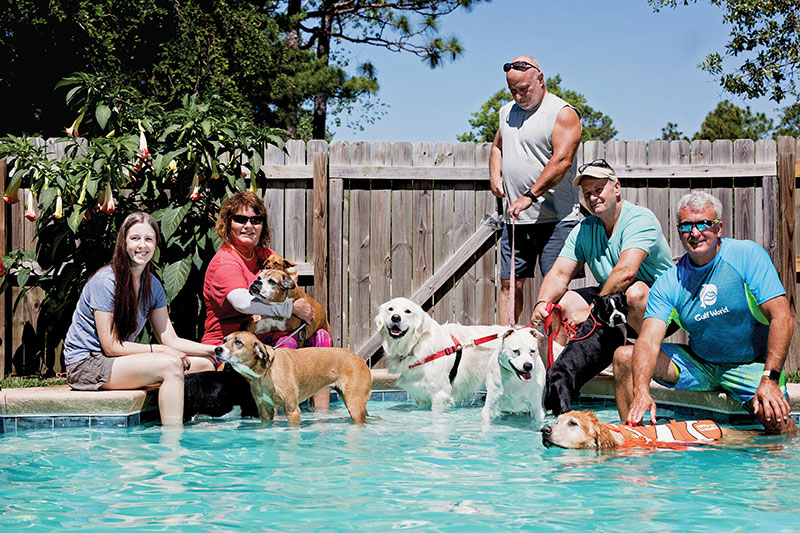 Dogs, owners and therapists gather at the pool. From left: Summer Austin brings her dog Gracie for therapy. Here, she pets Barrett’s dog, Marley, while Barrett tends to tiny Ema, who swims to build confidence, and Allie, whose degenerative disease makes walking difficult. Bennett, an English cream retriever, is a cancer survivor. Dewey, with owner Henry Patterson, was incapacitated by arthritis but now jumps into the pool and swims for an hour. Beside Dewey is Barrett’s husband, Craig, and Ari. At right are Koda Bear and owner Boomer McFall.

A lifelong animal lover, Melanie Barrett, of Santa Rosa Beach, was born in Orlando and grew up in Jacksonville. When she was 14, she moved to the small town of Bonifay, where life was slow-paced and she had plenty of time to play with pets and bring home “anything that was lost or fell out of a tree.”

Unable to fathom “cutting into animals,” this Bulldog abandoned the idea of being a vet and graduated from the University of Georgia as a journalist, using her keen observation skills to convey compassionate stories about the people and world around her.

In 1993, Barrett was a divorced, single mom with a young son living in Dothan, Alabama. But after visiting a friend living on the Emerald Coast, she immediately connected to the area. “I loved it and knew it was where I wanted to be, so I moved down quickly,” she said.

Once settled in the area, Barrett parlayed her photojournalism background into a photography business — mainly shooting beach portraits for visitors. Since 2005, she has been married to Craig Barrett, whom she calls, “the world’s most supportive husband,” and together they have four grown children. She continued to raise pets of all kinds — horses, dogs, cats, gerbils and even mice — and began exploring holistic approaches to healing, such as essential oils and aromatherapy for animals.

After a routine visit to the vet in the fall of 2013, everything changed for this good-deed-doer.

“I was at my vet’s office. They were short staffed, and it was just chaotic. Phones were ringing off the hook. So I volunteered to help man the phones,” she explains.

Soon Barrett began to realize that it was, in fact, destiny that was calling.

Using her reporting chops, she dug into the Internet and discovered a place in Orlando that taught canine hydrotherapy. After training 50 hours in a pool with 60 dogs, she became the only certified Canine Aqua-therapist Instructor on the Emerald Coast. She also is certified in Animal Aromatherapy, Pet CPR, First Aid and Healing Touch for Animals — a brand-name for holistic “energy work.”

Barrett came back with a new certificate, but it was so much more for this doe-eyed brunette. “My dream came in 2014,” she stated matter-of-factly of establishing 30A Animal Wellness — the umbrella business that now includes 30A Swim Dog, 30A Animal Aromatherapy and Healing Touch for Animals.

Last year, she again amped up her professional pet training, this time in Fort Lauderdale, by taking a course given by “The Dog Whisperer” himself, TV celebrity and New York Times best-selling dog behaviorist Cesar Millan.

“He’s all about the energy and how the dog can feel human energy,” Barrett said. “When Cesar was up on stage, he had two chairs: One said Leader, and one said Follower. He pointed to the Leader chair and said, ‘If you don’t take this chair, the dog will.’ Things are so simple, but humans tend to make it difficult.”

Barrett learned exactly how to take the lead when it comes to dog walking. “On the walk with Cesar, the walk isn’t just about a walk — it’s about bonding and showing the pet parents how easy it is to turn around pulling — even dog aggression — and have a peaceful time. Using his technique, I have gone from walking three dogs that would pull to walking them barely holding the lead, and it’s so nice.”

In addition to credentials, Barrett stacked up “bricks and mortar” to make her dream come true. She dedicated a portion of her relaxed, rustic, two-story home to her business. Nestled at the end of Woodland Drive off Scenic Highway 30A, it is just steps from the Longleaf Pine Trailhead. Clients use a convenient first-floor entrance that flows into a sunny treatment room equipped with a treadmill designed especially for four-legged clients. Filled to less than four feet deep with filtered, non-chlorinated water, even the 12-foot by 28-foot swimming pool, which is surrounded by lush, green grass, was especially designed with pets in mind.

Tools of Barrett’s trade dot the treatment room: a large pitcher filled with bright yellow tennis balls, a collection of leashes and inflatable collars. Soothing music streams to the pool area, and an aromatherapy diffuser gently mists healing fragrances from dozens of different essential oils. Lemon increases energy, whereas lavender relaxes. Because it promotes cellular health, frankincense is this therapist’s “go to” to combat cancer. Barrett recommends its use for Labradors, who are prone to cancer. But since you can’t be too careful, she uses it daily inside her own home, because, as she says, “Why not?”

A large dry-erase board records each swimmer’s name and how many visits they’ve had to the pool. With at least a dozen tick marks, dogs Haley and Bennett sure know their way around a pool; but if he wasn’t retired, Michael Phelps surely would keep his eye on a pooch named Dewey. This 13-year-old American bulldog mix was one of Barrett’s first furry clients. Her owner, Henry Patterson, of Miramar Beach, brought her to Barrett hoping to ease Dewey’s arthritis. 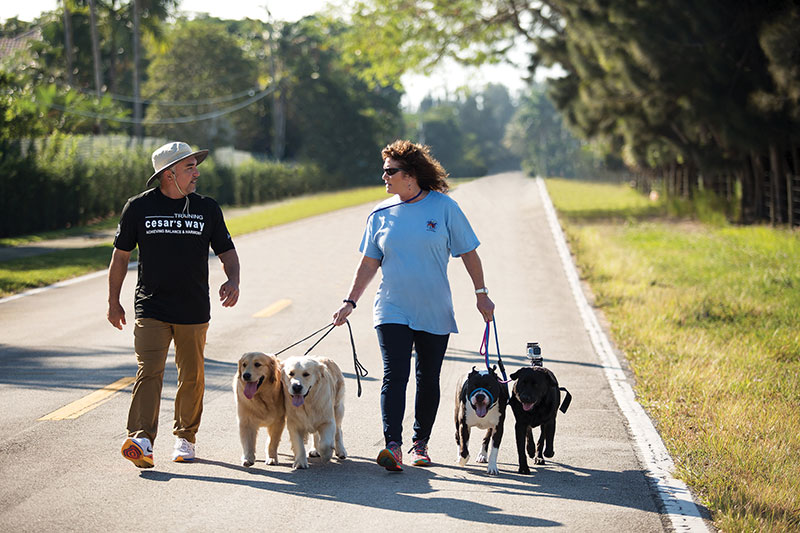 Patterson learned of 30A Animal Wellness from Dr. Tonia Schatzel (“Dr. T”) at 30A Vet. Dewey was lethargic from pain killer medication. “She was not herself when she was doped up,” Patterson said.

“When Dewey came in 2015, Henry had to carry her or pull her in a wagon, and I would have to help her out of the pool,” Barrett said. “Today, we toss a toy into the pool, and she jumps in and swims for an hour, and then we do energy work.”

Dewey relishes her wellness regimen so much that after her swim, she heads straight to the treatment room and automatically lies down, waiting for her twice-weekly therapy session. “She just expects it now,” Barrett says with a grin.

“It’s done wonders for her mobility and her attitude,” Patterson said of Dewey. “It’s been at least a year-and-a-half. She still has arthritis, but she’s off the medication, (and) she swims like a champ and just loves it — that’s the main thing.”

Dewey is just one of 300 dogs who have been treated with aqua therapy through 30A Swim Dog. Barrett’s current roster of 50 clients can’t speak for themselves — at least not in English, anyway — but their “moms” and “dads” surely can. Her Facebook page is filled with testimonials of happy human clients, many of which follow her on Instagram. Barrett knows the names and ailments of all her furry friends and keeps photos of them on her iPhone.

There’s Frankie, a 17-year-old male pug who had problems breathing. His owners called Barrett from the vet’s office, and she thought they wanted to help ease putting him down; but she prescribed swimming, instead. “It changed his life,” Barrett said. “Last I heard, the owners were building their own pool.”

Roxie is a 12-year-old female Doberman. She was “going down on her hind end, due to an FCE”— a fibrocartilaginous embolism, which is a blockage in a blood vessel in the spinal cord due to an injury that was caused by jumping or landing awkwardly. After a couple of months of swimming, Roxie was walking again.

Barrett receives referrals from a few local vets, and she also works with animal rescue groups, including Alaqua Animal Rescue, in Freeport. Director of Operations Taylor Hood asked her to work with Eenie Meenie, a terrier/hound mix who vacillated between being aggressive and being standoffish — neither were good personality traits for a dog who was up for adoption.

“I brought her home, and we did energy work, swimming to build her confidence and some Cesar’s Way training, because they said she wasn’t good on a lead.”

Within a week, Eenie Meenie attracted a prospective family, and by the end of the second week, she went home with them … and now, her name is Madison.

Barrett is proud of her “track record” — from a tiny Chihuahua with a broken leg to a massive Great Dane seeking the confidence to enjoy a Gulf swim — and cannot recall a dog she could not help in some way. Also, she is totally OK with being considered a last resort. “When the vet says, ‘There’s nothing else we can do,’ they give it a shot with me.”

She recognizes that 30A Animal Wellness is not for everyone. “Some people don’t believe in it, or it’s not for them. That’s fine. I do, because it works and it’s not invasive,” she said.

She likens her Healing Touch energy work — which she begins by suspending a stone pendulum above different parts of the animal’s body — to praying. “It is spiritual-based. It’s all about intention,” she says. “My intention is that the animal is filled with peace or is healed.”

Though she continues to hone her holistic wellness techniques, she is content with her business exactly as it is. “I can’t think of anything else I would add,” she says. “This is my life now: helping one animal at a time.”

Healing Touch for Animals assists with: