As American as Pecan Pie

More than a humble dessert

Whether you eat it plain, a la mode, with whipped topping or with cheese, pie is never a bad thing. Unless it’s an authentic medieval-era pie, that is.

In Britain in the Middle Ages, pies were referred to as “bake metes,” or baked meals. The crusts were called “coffins.” Because the crusts were several inches thick, they were inedible, but they were also airtight. This meant the coffin kept the filling from going rancid.

Harriet Beecher Stowe wrote, “The pie is an English tradition, which, planted on American soil, forthwith ran rampant and burst forth into an untold variety of genera and species.” Americans have gotten even more creative in their pie-making since Stowe’s day … but we still can’t claim the apple pie. The earliest documented reference to apple pie is British and comes from Robert Greene’s 1589 book, “Menaphon,” in which the character Doron tells his adored Carmela, “Thy breath is like the steeme of apple pies.”

The British can keep their apple pies, and their steak-and-kidney pies, too; for plenty of delicious American-born pies abound. Ask any Southerner about pecan pie, and by the time your conversation has ended, you’ll agree with Kate Lebo, author of “A Commonplace Book of Pie,” that “chopped pecans, corn syrup, directions from the Karo bottle’s cherry-red side are what mercy taste(s) like to some.”

In conclusion, the roads to Heaven are probably paved with flaky, golden pie crust, and even though John Lennon was British, he was surely talking about a Kentucky bourbon-drenched pecan pie when he said, “I had a vision that a man came unto us on a flaming pie, and he said, ‘You are the Beatles with an A.’ And so we were.” 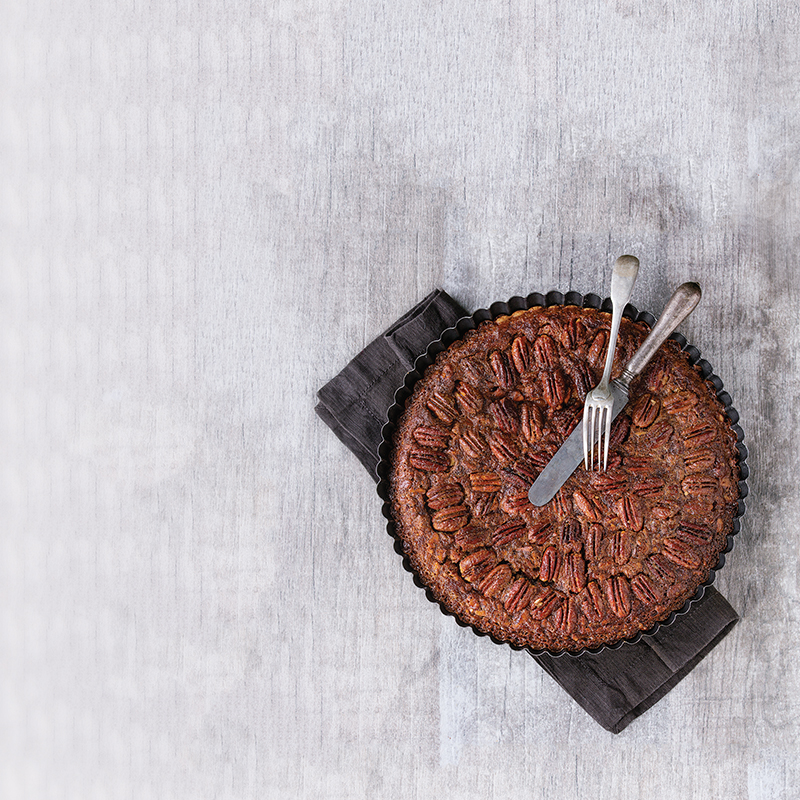 For the crust (makes two):

Directions: Spread pecans on a baking sheet and toast at 350° for 10 minutes, stirring halfway through. While pecans toast, prepare crust: Mix together flour and salt. Cut shortening into flour until mixture resembles coarse crumbs. Stir egg into a measuring cup; add vinegar and cold water to make 1/2 cup. Stir egg mixture into flour mixture. Divide dough in half. Roll out halves between waxed paper. Refrigerate one crust while you make filling; freeze other crust for later use. In a saucepan, melt butter and sugar on medium-low heat until sugar is mostly dissolved. Remove from heat. Add corn syrup, vanilla, salt, zest and pecans. Beat eggs in large bowl, then add cooled pecan mixture to eggs. Stir well. Place chilled crust in pie pan. Pour in pecan filling. Trim off excess crust. Use fingertips to flute edges of pie. Bake at 350° for 50 minutes or until filling is set. After 30 minutes, cover rim of pie with tinfoil to prevent crust from burning.

“A finger in every pie” describes a busybody. In Shakespeare’s “Henry VIII,” the Duke of Buckingham uses the phrase when speaking of Cardinal Wolsey: “The devil speed him! No man’s pie is freed / From his ambitious finger!”

“A pie-crust promise” refers to Jonathan Swift’s famous line, “Promises and pie crust are made to be broken.” In Disney’s “Mary Poppins,” Mary says, “That’s a pie-crust promise: easily made, easily broken.”

“Humble pie” is derived from “umble pie.” “Umble” comes from the Old French word, “nomble,” meaning the innards of an animal. A pie containing innards was considered “humble” fare, suited only for the poor.